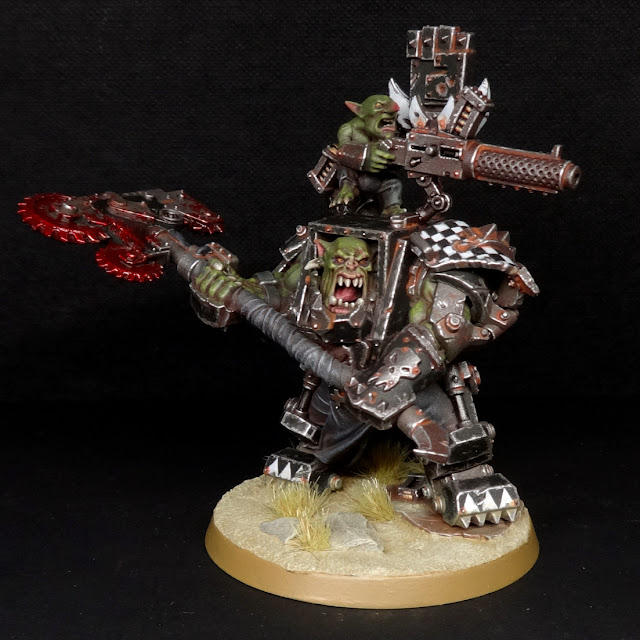 No one, not even the boss himself, can remember what his original name was. He'd move from campfire to campfire, telling the lads to "pay attenshun" to Da Plan for the next raid. He'd tell them it was "sirrus bizniz." So after a while, that's what they called him. "Here comes Sirrus Bizniz," they'd chorus. The lads didn't know what was wrong with drinking and rokking out the night before, and then winging it on the day. Of course, they conceded, that was probably why he was the boss.
But who is Mr Bizniz, and where does he come from?
The artist latterly known as Sirrus Bizniz hails from Boff's Rok. A populous and comparatively advanced ork world, all sorts of subkultures await listless yoofs. Among them: Goff rokk. As soon as young Sirrus heard the wailing of atonal guitars and the pounding of the drums he was filled with a sense of awe. He got obsessed, spending all his time in drunken mosh pits and immersing himself in the subkultur. He wasn't much of a musician; rather, he was a connoisseur of 'da scene.' He had time for all the sub-genres, be it speed rokk, heavy rokk, deff rokk, tribul rokk, extra shouty rokk, doom rokk, prog rokk, djentle rokk, or just klassic rokk.
He gained a reputation for knowing all the bands, and who was 'metil' or 'not metil.' With so many people asking for his opinion, his influence grew. He gathered a warband of metilheads and, after orchestrating a surprisingly savage surprise attack, he took over a mortul kombat arena on the outskirts of Talltown. Sirrus quickly set to booking the best rokk bands he could find. Rokkers, and teef, came pouring in from all directions.
After a while Sirrus started getting funny ideas. What if there were other orks, in other places, who didn't have access to such good rokk? That wouldn't do.
There should be a rokk festival. A travelling rokk festival.
Sirrus gathered up promising bands, stage krew, docs (for the mosh pits) and an absolute pile of fangrots who understood that (a) metil was good, and that (b) Sirrus bloody well wasn't going to do the cooking, or dig out the drops. Indeed Sirrus' primary job, other than having an ear for good bands, mostly seemed to consist of shouting things like "We's going to Grimbul's Kanyon for da akoostikks," then spending several days drunkenly moshing while the bands took turns trying to induce a landslide with resonant frequencies.
After the Bloodstikk Festival had toured around Boff's Rokk a few times, Mr Bizniz started to feel weird, and not just because his boots were starting to feel too small. During concerts he'd have visions of orks all across the galaxy. Orks who needed to rokk. "We're taking dis fing to da stars, lads," he said one night, a tear in his eye. Everyone assumed it was the grog talking.
The next morning Sirrus gathered up his mountain of teef and, just like that, bought a ship. Some thought he'd gone funny. Who did this jumped-up festival organiser think he was? But the rokkers understood, and the rokkers became his krew. They were even joined by several renowned bands, including Metallorker, Iron 'Ead, Rage Against Da Everyfing, and Mastodork. 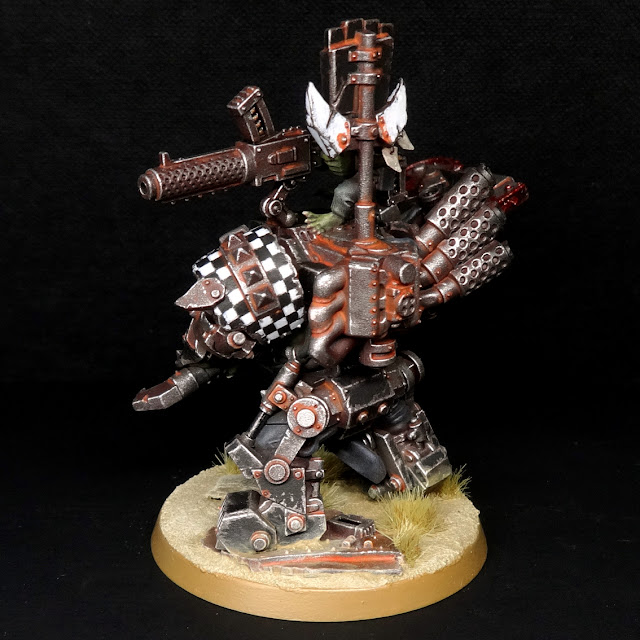 With hopeless optimism, I thought I'd belt this one (large) ork out in a few hours. You can guess how that went; I got engrossed, particularly in painting his glorious face. It's a satisfying model to paint. The axe makes absolutely no sense, in the tradition of most ork weapons, but it does look acceptably brütal once covered in appropriate amounts of Blood For the Blood God. I reckon there's some mileage in lopping off the chain axe head and replacing it with a hammer of some sort, but whatever. BUZZZZ.
The rest of the painting pretty much followed the steps outlined in my previous post, although I spent extra time on the skin, adding blue glazes to veins and eye sockets, along with MOAR RED on the lips, ears, etc. I'm sure there's an argument for doing more highlighting on the trousers/tabard, but I wanted it to look consistent with the rest of the army, and retain that dusty look.
I really am liking the rusty finish I'm getting by mixing pigment powder with Vallejo's matte medium. A glaze of paint gives a more satin finish, whereas this looks nice and dry. Perfect for rust. It's doubly important with Goffs, since I've elected not to add a red accent colour, so having the extra intensity adds some much-needed interest.
My only regret, and it's a significant one, is my failure to gapfill the joins on the grot's shoulder, and his left trouser leg. It would've taken very little time, and thus do we see the wages of impatience.

Heavy metal grots. By which I mean, killa kans. Or possibly a dread. Something clanky. Plus, of course, I'll continue to write about how Sirrus went from party animal to "visionary" warlord.