A couple of post's ago Jeff gave us all an update on the opening games of our Necromunda campaign. Em had attended with her Aegis Security Van Saar gang and returned full of Hobby Juice. She immediately went and ordered the Necromunda starter set so she could have her own rule book etc. In the starter set there are two gangs included. The muscle bound Goliaths and the leather bound Escher. The latter of which Em threw my way. Up until this point I was pretty indifferent to the world of Necromunda. I found the setting interesting, but I was really reluctant to get into yet another game system with yet another rule set to learn. I already have trouble keeping track of rules for Warhammer 40k, Warhammer Fantasy, Frost Grave, Bolt Action, Kill Team, Full Contact Tiddlywinks and whatever else it is we play. Saying that, having fresh plastic crack in my hands caused me to completely relapse and I dived headlong into creating a gang.

Using the Yaktribe tools I started creating a roster. Whilst doing that I started mulling over the background for my gang. I spent some time pondering what could an all female group be doing in the underhive to survive. Then a certain episode of Firefly where the residents of a brothel defended themselves against a posse of overly possessive men came to mind. I also wanted to try and incorporate the cyberpunk aesthetic as well, which led me to the club scene in the first Matrix film. Which led me to my gang being the owners, residents, and workers of an industrial metal/dance club, bordello, and drug den. Then the name came naturally to me. Then I realised that the name I picked I couldn't use as it was a Silverchair album (and probably a real place as well) so I reworked it into the Blacklight Theatre.

Now that I had a solid concept and a name I needed to work on their motivation and flesh things out a little. Reading into the background given by the others I decided that the Carrion Children had been providing protection services to the Blacklight Theatre and in their absence the staff had to take matters into their own hands. Sisters are indeed doing it for themselves. As I summarised to Charlie, the Blacklight Theatre is Coyote Ugly meets Moulin Rouge, but with more guns.

That's enough waffling from me, let's meet the girls. 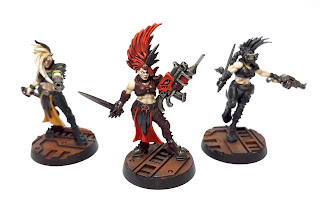 In the centre is Scarlet, she is the owner, manager, and (in her words) Boss Bitch of the Blacklight Theatre. On the left we have Bobbi, who is head bouncer and to the right is Goose, who is bar manager and recruitment. 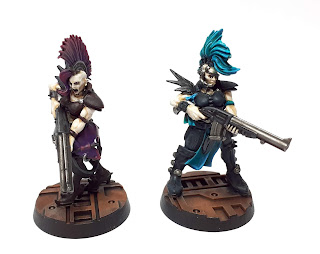 Next up is Flick, on the left, and Coco, right. Both of whom are dancers or bouncers depending on what mood they are in, or what drug they are on that night. 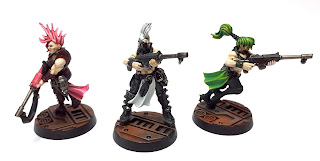 Then we have, from left to right, Daze, Kaz, and Leaf. Who switch between dancing, working the bar, or working the customers as and when is needed. 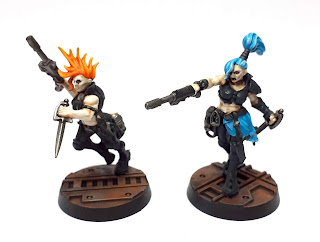 Finally we have our Juves, Shorty on the left and Spud on the right. They are mainly collecting glasses or dealing depending on what the clients can pay for. 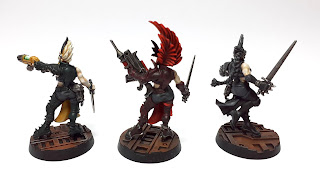 For the painting I wanted to stick to a very goth/industrial aesthetic. I initially kept all the leather black. However that didn't really sit so well so I tried highlighting the black in colours matching each individuals hair. This also didn't work so I ended up painting them in either really dark red, green, blue or black depending on if it worked with their hair. 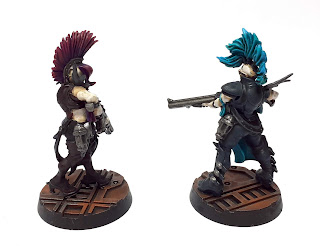 For each ganger I wanted to make each one stand out and what better way to do that then with their hair. Escher are all about the big hair and big guns so I could not not give them brightly coloured hair. It set each one apart. In some cases their names gave them the colour, Leaf for example couldn't be anything other than green. In other cases the colour gave the name, in Daze's example. 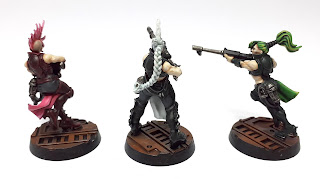 I've tried to make the weapons a little less uniform as well. Some are plain metal, some have their black coating still, while others have been customised, like Scarlets red Bolter. 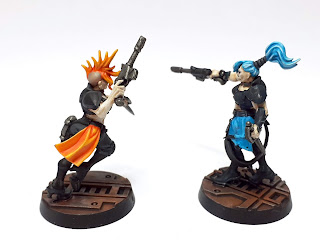 There isn't much else to say. A simple rusty metal basing fits nicely with the boards and a few details here and there. I will admit these aren't the best painted models I've ever produced but I think they look striking as a whole and they are table ready so I can start playing catchup with the other gangs.

As soon as they've had their first few games I'll report back in.