I felt the need, the need for speed. And endless cliched Top Gun quotes, so I put a couple of Ork planes together and here they are.

Is your ego riting cheques wot your Dakka can't cash? Then you need a Dakkajet. 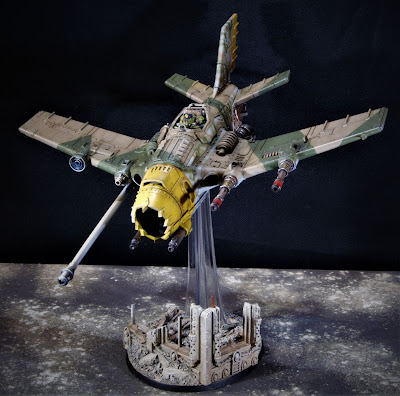 The Dakkajet received a bit of conversion work to it.

- I swapped the position of the vent hatch and the cockpit to give the jet a 'longer bonnet' so that it looks faster.

- I dislike the stock landing gear, and wanted to make at least one of the planes usable as a static model / scenery. With that in mind, I created a set of landing gear from the landing skids and a set of cheap 1/35 resin Stuka wheels off Ebay. These pin into little holes in the side of the fuselage and allow the plane to sit on the ground and look a bit like a proper plane that could e.g. land without exploding. Fortunately, the holes aren't particularly obvious when the plane is on its flight stand.

- For extra Dakka, I removed the two Port side bigger shootas and, using the breach of a Kannon and a spare 75mm Panther gun I had lying around, added a 'long barreled deffgun'.

I'm not sure how I'm going to use the long barreled deffgun in game at the moment. I could either hand wave it as the equivalent to two bigger shootas or use it as a D3 shot, S8, AP-1 gun instead.
As I mostly play with fairly relaxed opponents, I don't think they'll mind that much and trading fewer shots for bigger boom feels balanced (ish).

In terms of painting, I chose a camo scheme for the Dakkjet from a BF109 and copied it as best I could for the jet.

For speed, I tried to keep masking to a minimum and sprayed the duck egg base (mix of old Space Wolves grey and Vallejo sky grey) first.
I masked the top camo (Baneblade Brown and Castellan Green but then painted that by hand (with a little going over once the mask was removed), before giving them a light over-spray of the same colours to smooth out the brush marks.

I masked around the yellow nose cone and rudder before spraying. For this yellow, I used a mix of scorched brown and bad moons yellow with a later over-spray of Bad Moons yellow.

Finally, I handballed the wibbly side camo with more Baneblade brown and Castellan green, ensuring that the trails would end in sectors of their own colour for my own ease.

I had big problems with my airbrush at this point and this is the part of the scheme I'm least happy with because its grainy and a bit messy. Unfortunately, by that point I was committed to what I'd already done and didn't want to go back and start from scratch so I had to live with the scheme as it was. 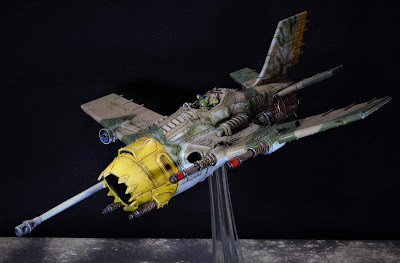 Or does you want great balls of fire? Then you need a Burna-Bommer! 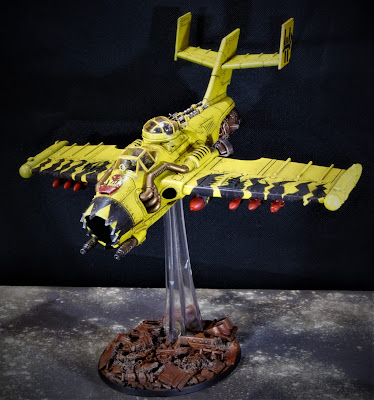 The Burner-Bommer was a much more 'stock' build and the only conversion work I carried out was adding some extra uprights on the tail plane from spare ailerons and leaving off the landing skid  (I've internally retconned it / am in denial that the plane has internal landing gear).

Painting was a lot simpler than the Dakkajet. It got sprayed Averland Sunset, then received a semi-opaque over-spray with Bleached Bone before a top coat of Bad Moons Yellow*.

I've found that spraying Bad Moons Yellow creates a not-entirely-wanted fluorescent effect and I was aiming to rectify this with the mid coat of Bleached Bone. However, as you can see, this didn't entirely work and it still came out quite fluorescent. I think this can be sorted by mixing some brown in with the top yellow (like the Dakkajet nose cone) and I'll give that a go when I next spray a Bad Moons vehicle.

The wing flames and glyphs got painted by hand (a bit of an ordeal) with a mix of black and brown.

Both planes were weathered and finished in the same manner.

- Using a sponge segment, a non-homogeneous mixture of a greys and silvers (remember that planes are mostly made of aluminium folks) was lightly dabbed around areas that would see the most impact with small debris / grit whilst flying.

- Both planes were sprayed with Vallejo gloss varnish. Once this had dried, a dark brown / black oil paint wash mixture was liberally sprayed over the model in sections at a time. This mixture was also run into panel lines and abutments to define these more.

- Using make up removers / Q tips, the excess oil paint was removed from the model, leaving deliberate streak marks on the planes to add dirt and show where the accumulated filth of battle had built up. This stage does not need to be hurried as oil paints take hours to dry and can often be reactivated with a little white spirit.

- After drying overnight, the planes were given a coat of Vallejo matt varnish to seal the weathering. At this point, details like the pilot, accessories, bullet chains, searchlight, missiles etc. were painted.

NB. Painting the missiles separately (i.e. off the plane) and sticking them on later is going to make your life much better.

- The cockpit canopies** were painted by hand and then attached by PVA glue.
The reason you use PVA glue is that both superglue (cyanoacrylate glue) and plastic cement will give off vapour which will fog the inside of the canopy and make it impossible to see your carefully painted pilot / grot gunner.
Granted, the PVA bond won't be as strong, but it's hardly a weight bearing part. 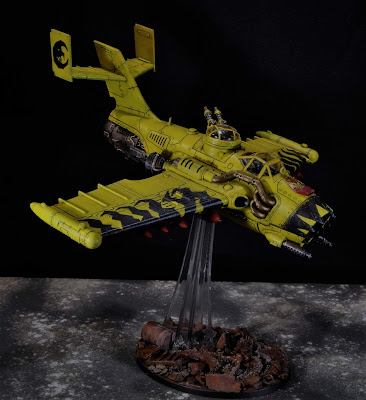 I chose two different basing schemes for contrast with the planes. The yellow Burna-Bommer is flying over a scrapyard landscape and the darker Dakkajet is flying over the concrete ruins of a bombed out city.
Again, I boobled a bit and must have touched the flying stand whilst building up the debris on the base of the Burner-bommer, because you can see blemishes on the flight stand. D'oh!


And that's it. Hope you enjoyed this.

*At this point, I must apologise for still using paints that are years out of stock / availability. If you're following this and want to get hold of the equivalent of  some of the paints I'm talking about, use this link:
https://www.dakkadakka.com/wiki/en/Paint_Range_Compatibility_Chart

** Writing this, I've just realised that I've forgotten to attach the cockpit windshield to the Dakkajet. What a noob. As the photography is the first part of a post I do, its a bit late to go and find it now...