Yes, the drums of war are sounding in the Old World once more. Our Border Princes campaign is coming and the Dwarfs of Karak Hoch are answering the call. Sound the horns, beat the drums, march to war, oh and paint many, many little mans.

It's fair to say I have rather a lot of Dwarfs. BUT IT IS NEVER ENOUGH! Ahem. I wanted to take the new burst of fantasy enthusiasm to paint some of the all-too-massive pile of Dwarfs waiting to join the Stormborne ranks. In this case it was a pair of 25 strong Dwarf Warrior units equipped with Great Weapons for what is technically called "Even More Killiness".The unit on the left is the Karak Hoch Fyrd and are the first regiment raised entirely from the new settlers in the new hold from our previous campaign. As such they proudly bear the rune of Karak Hoch on their banner and march to war in it's name. The unit on the right is the Smithy Halls Muster, a regiment of Smith's apprentices - very used to swinging big hammers - marching to war in craft brotherhood.

I'm using the very old Dwarf plastics as to be honest, I'm not all that fond of the previous ones. It's one of my very deep regrets of the move to Age of Sigmar that I'll never get a modern, beautiful box of standard warriors; thunderers; and crossbowmen in the mould of the new ironbreakers and longbeards. Sigh. In order to get a little variety into the quite samey sprue I used spare great weapon heads from the longbeard/hammerer kit to sprinkle some fancier weapons among the basic ones. The other way to improve variety in Dwarf units is beard colour. Line up all the identical heads and make sure that each has, at minimum, a sliiiiightly different hair colour. It doesn't take long and really helps kill off the twins problem. 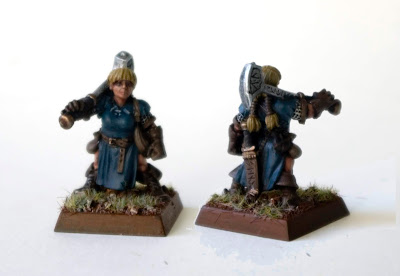 Worth a closer look - as most of these models are the proverbial sows ear that I've attempted to silk purse - is the leader of the Smithy Halls Muster: Sigrun Alairksdottir. Sigrun is the shop steward of the Apprentices and a lethal swing with her self-made all-metal greathammer. She's a Hasslefree model that I've been looking for a place in the army for a little while now. She's dressed in the standard Stormbourne blue/grey (Incubi Darkness highlighted with Russ Grey) and everything else is in shades of leather. All the better to emphasise her lowly status. 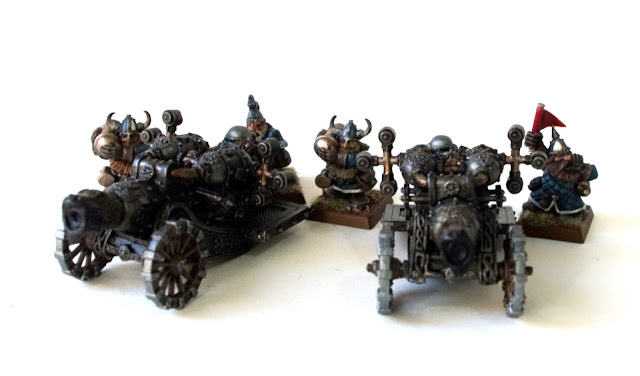 Speaking of lowly status, Dwarfs revere their traditional war machines. They pour love and ornamentation into them and trust them as they could never trust a living soul. Then some maniac builds something "new" (a word old engineers spit like a curse) and creates some abomination like Gyrocopters or in this case a Flame Cannon. Sure, they've been middling successful for a century or so but that's no-where near long enough for a sane and sober Dwarf. As such, they are crewed by the young, the mad or the reckless. Sadly there's a good reason for that. These machines are deadly but when they go? Whoooo boy they go large. One wrong move and you are geography. 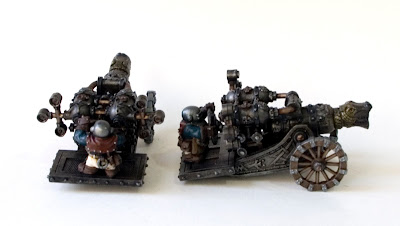 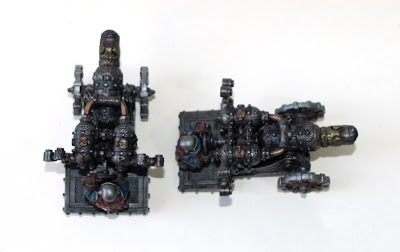 Now, while I am Dwarf-ey to my core, and while I love the design of these models oh so very much. Dear gods in any available heaven they are evil to assemble. It made me realise how spoiled we are in these wondrous days of plastic everything. The large lumps of metal are all eeeeever so slightly misaligned or twisted and trying to figure out sub assemblies to physically get paint brushes into was a nightmare. Suffice to say, I enjoyed painting them waaaaay more than I enjoyed building them. I'd toyed with a lot of different schemes for these weapons but eventually leaned in to the untrusted, barely ornamented look. All the fancy bits are from the casting process, not any love after the fact. Everything got painted in oily cast iron with brass fixtures and fittings. I heat stained the muzzles going through the temper colours from straw yellow to purple with thin ink washes. I then covered most of that with black soot drybrushed on. 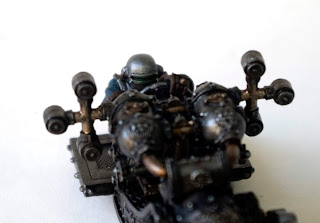 I wanted the crewman to have a "Proper Protective Equipment" look about him so went with steel armour and that greenish hue that thick glass has. I figure they just bent an inch-thick rod of glass into shape and went with it for the visor. 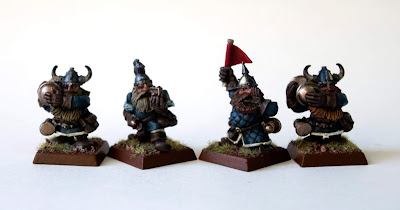 The remaining crew (one borrowed from a bolt thrower kit to get some variety in) were painted in the standard Stormborne blue-grey and white with hair colours all indicating young Dwarfs. No greybeard is going within a mile of those Grugni-cursed contraptions (muttering fades to black).

And that's yer lot! It has been super fun returning to the Dwarven fold. It's been long enough that it's fresh and exciting to paint them again and rediscovering just how fast and easy they are to bash out has been a delight. I'm hoping to get at least the units of Irondrakes and Ironbreakers that I have assembled painted by November. Maybe even more. The Stormborne host will be well reinforced when it marches south. Buah ha ha haaaaaa! Until then