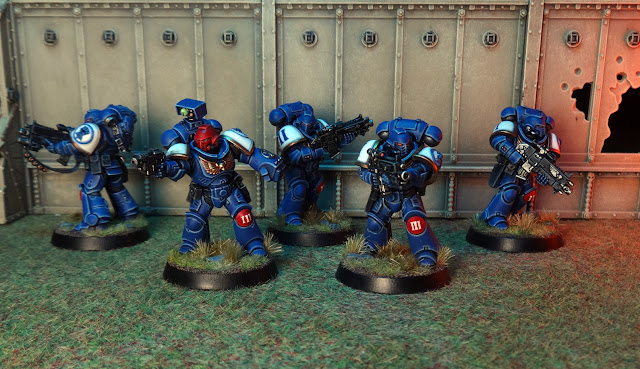 Here's the first squad I finished for my off-brand Ultramarines, the Cobalt Scions. They're even more Roman than the Ultramarines, in that they'll have Roman flaws as well: dangerous levels of personal ambition, an obsession with venerating and exceeding the deeds of their ancestors, and the naivety to think that the humans already living in the area they're going to claim as their new fortress monastery will be happy to hand over the reins of power.

Heraldry
I'm breaking from the standard rules of shoulder trim indicating company colours. Instead, the left kneepad does that job, with the squad number painted onto the right shoulder pad. Everyone gets gold trim, because gold looks great with blue. The chapter icon represents the Gauntlets of Ultramar (again, a bit of ancestor worship).

The eagle-eyed will note that I appear to have some marines from squad 1 and some from squad 2 in this post. That's because there'll be some bare heads coming later, sprinkled among the units, but initially I just wanted to focus on learning how to paint Mk.X plate.

Of course, an unexpected downside of this was my other half asking "why do they all have M&Ms on their knees?"

It cannot be un-seen. I have accepted my chocolaty fate.

Painting
I've followed pretty standard G-Dubz paint recipes here. The only exception is the gold, which I basecoat silver before putting any gold on, which helps offset gold's natural transparency. For ease, the stages for the major colours are laid out below.

Basing:
It's been done to fit in with my temperate/grass board, and is consistent with my Imperial Guard army so that they'll look coherent when operating together. Which they will. A lot.

How long does this take?
I'm probably clocking about five hours per marine, give or take. I've been pretty slack with some elements of the mini; hopefully the work I've put into the blue will distract from that. The challenge is to accept imperfections, or I'll never finish them.

Where'd you get those fist icons/power fist/backpack unit?
From the Imperial Fists Battleforce Box GW put out for Christmas 2018. The signum/scanner/thingy on sarge's backpack has been slightly converted so that it's looking in the same direction as his helm, suggesting a mind-impulse link.

What's their background?
Ohhhh boy I've gotten overexcited. Again. I'll have to cover that in a future post; maybe when I've got the next five marines done. Which won't be for a while, as right now I'm working on some Fantasy stuff.

Right, now for a heap of pictures. Enjoy! 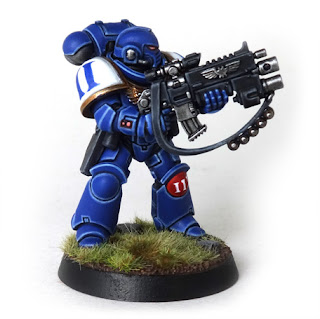 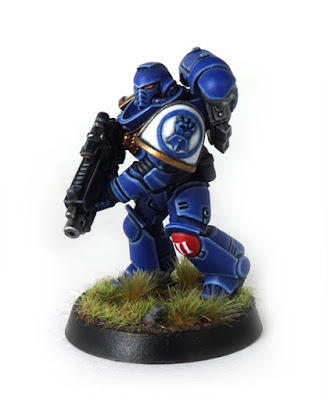 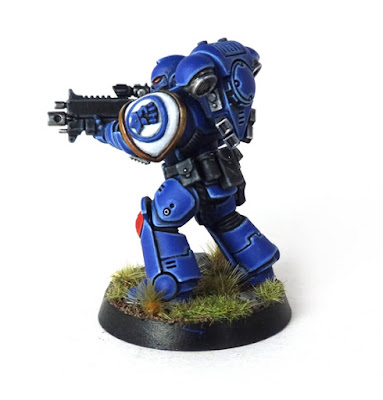 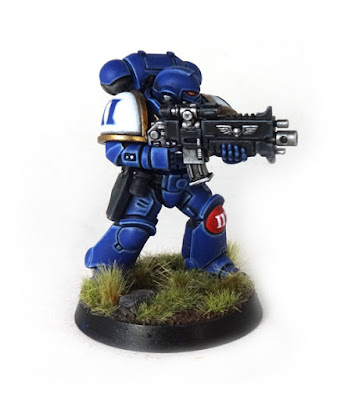 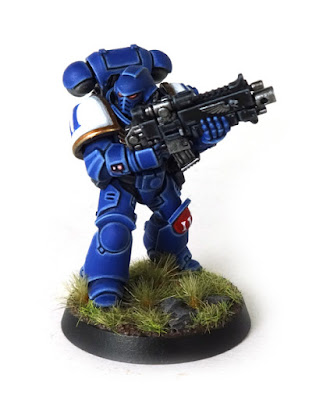