Is your gang tired of a constant stream of slaying, pillaging and loot carrying?

Do you need a giant robot with an en-trained Xenos insect brain to do your heavy lifting and face smashing but you’re too short of time in your hectic gang warfare life?

Then you need, THE 6 HOUR AMBOT!

When Games Workshop first showed the Ambot model off, I knew that I needed one in my life. I also knew that I didn’t want to use their relatively ‘factory fresh’ paint scheme because

A) I’m lazy and
B) I wanted mine to look battered and heavily used – like the piece of tunneling equipment it is.

I wanted to get it painted quickly – preferably between the time I dropped my Son off at school and the time that my wife picked him up.
The challenge was on – paint an Ambot in 6 hours.

I did cheat a bit, the model was already assembled and primed black when I started and I did the basing after bedtime.
In terms of assembly, I cut off the silly looking rotary saws and under-slung weaponry - That melta would get ripped off as soon as the Ambot had to start using those claws on rock.

So onto painting. I painted the head separately as I was worried I wouldn’t be able to get decent access if I glued it on initially. So I superglued it to a bamboo skewer where I knew I could get access all round it and proceeded to paint the body in these handy steps, and forget to photo the head like an idiot.

Step 1. Make like It’s the 70’s and paint it brown.
Calthan Brown to be exact – the whole thing.
I did this quickly with a wide, flat drybrush.

Step 2. Drybrush it silver – Chainmail.
This wasn’t a particularly neat drybrush and was sloppier than I’d do to get an effect on a regular model but this is partly intentional as a starting point.


Step 3. Stipple with a Redish Brown – Dark Flesh
I used the same flat, large drybrush to stipple the redder toned brown over the entire model, At this point, I still wasn’t that concerned about neatness, as long as the paint was appropriately runny – i.e. not too thick to obscure detail but not running everywhere once it was down.

Step 4. Stipple with Orange – Macharius Solar Orange then Blazing Orange
Like the step before, but I was more careful to limit coverage and not obscure the previous colour. I started with a drabber orange with a more opaque tone before moving onto a more vibrant orange in smaller patchier areas. The trick with this is to get progressively smaller areas of coverage so that you still get the 'lower' colours showing through. 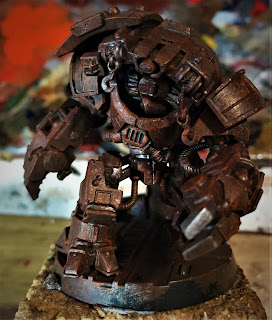 Step 5. Wash with Agrax Earthshade
Nuff said. Watch out for pooling.
This may take a while to dry, so go and help yourself to a cup of tea and biscuit. Yeah, a good biscuit, not a digestive. Have you got anything better than shortbread? Oh yeah, with a chocolate filling? That’s the one. 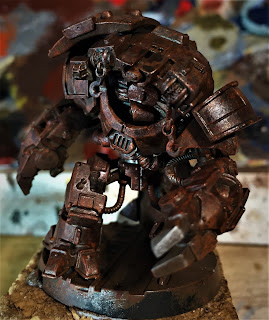 Step 6. Stipple on colour of choice.
I used a small drybrush to apply a grey base colour to the body of the Ambot and a Blue to the arm.

1. Unless you want to do multiple coats (i.e. 2+), pick strong base colours. Yellow would not be your friend for speed at this point.

2. Get the paint into the crevices – this is where it would be most protected from wear and tear. Be less concerned about covering flat plates and edges – this is where paint gets smashed off in double quick time. If you want guidance, go and look at a JCB bucket – either online or IRL if you live near a construction site.

3. Think about which areas would get most wear. The claws and arms are going to get the paint taken off them much faster than places like the back and torso of the machine.

MARK MISTAKE: I chose two different colours because I wanted it to look like the arm had been replaced and no-one had bothered to re-spray it (Classic cut and shut). Because the contrast between the blue and the grey isn’t that obvious, I don’t think the effect quite works. . 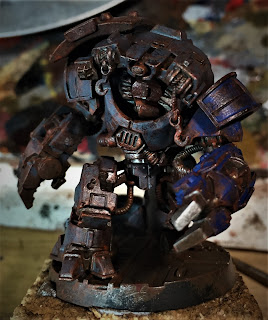 Tunneling machinery gets battered to all hell and at the end of a shift, any rock exposed surfaces will be bright steel. If left, these will rust quickly.

I use a combination of Seraphim Sepia, various rust colouring weathering powders and Vallejo matt varnish mixed into different colours to apply light coats of rust to the model.
When doing this, I tried to vary the tone across the model and use lighter tones for areas that would have seen more recent abrasion and the darker colours for areas that only infrequently get damaged / scraped. 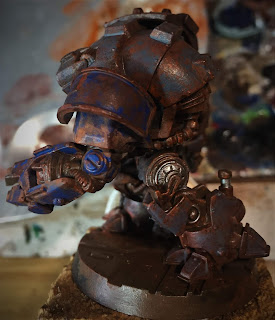 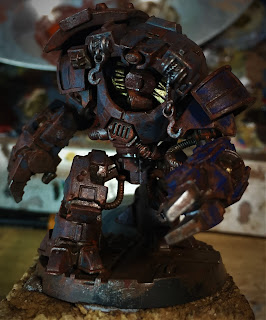 There are various hoses, lights, mandibles, gears etc that also need painting and I painted these. I took the opportunity here to paint joint areas with a mix of typhus corrosion and Nuln oil to emphasise the build-up of dirt and mud around highly lubricated areas. I also finished the head and stuck that on – being careful to scrape away primer from the contact points so that the head would have something to stick to.

Aside from basing, the Ambot is now painted and ready to go. Set it to digging up useful stuff in your mines or for digging out useless stuff from your opponent’s skulls – the choice is yours.