Any long term readers will have probably noticed the odd historical post cropping up from time to time. Mostly 1940's flavoured Bolt Action posts involving a lot of tanks and things. It is no secret that Jeff, Emma, and I are history nerds, amongst other things. With the seemingly never ending pandemic lockdown isolating Emma and I in our own home with nothing more than a Sharpe dvd boxset and Assassins Creed: Valhalla we started to stray into more historical pastures for our gaming needs. This was probably was also influenced by yet another new edition of 40k with yet another level of complexity being added to an already convoluted system. A system that I, personally, am finding harder and harder to maintain a grip of and keep an interest in. However, this is a rant for another time, this time it's all about one of my favourite things to do: line up little plastic soldiers in neat lines and roll dice at them. 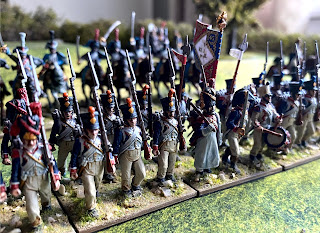 Napoleonic wargaming is possibly the ultimate in lining up little plastic soldiers in neat lines and throwing dice at them type of gaming. You will notice that the models are based in groups, in this case each base of troops represents a company of about 120 men. Each unit is a Battalion which is your basic infantry unit. You are basically free to use which ever basing, number of models, and model manufacturers that you see fit. We settled on 6 models per company as it looks nice. All of the models shown here come from Perry Miniatures. We are using the Black Powder ruleset written by Rick Priestley and Jarvis Johnson. It's is a pretty straight forward set of rules leaving much down to the players being sporting with each other in the name of having a fun time. It relies on players picking what is sensible and appropriate for the game you are playing. There are army lists available but these mostly are a suggestion rather than requirement. It does give a limited set of special rules that add flavour to each force. For example the British infantry have a rule that makes them better defensively to reflect their emphasis on musket drills, the French conversely have a rule to make them more enthusiastic in attack to represent their zeal.

Officers are not the heroes of the Old World or the superhuman fighters you have in 40k. They are command and control masters. The higher your officer's strategy rating the better your units follow orders and an army that follows orders is far more effective than an army that doesn't. The actual models themselves are simply a representation and can be as simple or creative as you like. The game also doesn't take into account individual casualties but rather a stamina system that once enough hits have been inflicted the unit becomes less effective and starts taking morale tests. That is the objective, not to kill every last model, but to break your opponent's morale. In addition to this, movement and the turn sequence are simplified compared to Warhammer Fantasy speeding things up. Mostly this game is intended for larger battles involving many more units than I have yet, but that is part of the appeal to me. The spectacle of several fully painted armies arrayed against each other on the table. 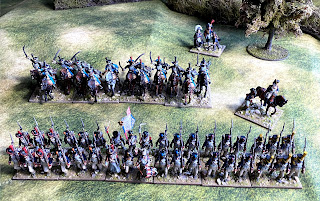 This isn't our first attempt at this time period. Jeff and I had a go at it many many years ago and failed. The sheer amount of white strapping and bright colours defeated us. In this day and age modern technology has given us contrast paints. Contrast paints are ideal for bashing out massed infantry in a reasonable amount of time with a reasonable result. I will be the first to admit that these models are far from the best painting I've ever done, but that wasn't the objective. The point was to have a unit of 36 models done in a sane amount of time. The simplicity of the rules and the freedom of modelling/basing etc frees up my brain space to focus on the history of the game. Some people will find that having to follow a defined paint scheme limiting and boring. That is the element that I enjoy, the researching and recreation of something that is real. This era of military history was a rich and diverse time for uniforms and formations. Sure I am basing my French army on a paper formation, the 2nd Division of the I Corps of the Grande Armee. However, what actually got used in the field didn't match up to what was on paper, and frankly, none of us here in the bunker are going to call someone out for using a unit that wasn't there. I mean who cares that the Scot's Greys where never deployed to Portugal during the Peninsula campaign? If you like the unit and want to have a unit of grey ponies running around then do it. It's just a game after all. What is more important is that you have a painted unit and are enjoying yourself. 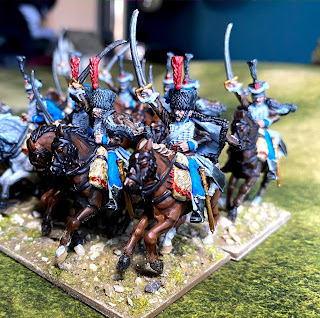 Maybe this seems like a slight contradiction, stating that I like doing the research but you can use anything that you like. I don't think it is. I have painted this unit of Hussars to represent the 2nd Hussar Regiment as they where the light cavalry unit attached to the I Corps. That makes me happy, knowing that what I have is accurate enough for me. What I am NOT going to do is spoil anyone else's fun. If Jeff wants to paint Highlanders, or if Em wants Scots Greys (Why the Scottish fetish guys?) then they are free to do so, but it is their choice and their hobby. I am not going to dump on that, especially when it means that models get painted and games get played. 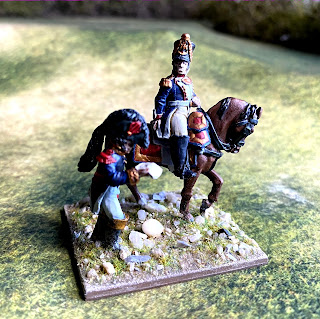 I guess that is the point of the Historical gaming is playing the 'What ifs?' There would be very little point in just replicating history exactly, that would just result in a giant diorama, which would be cool, but not quite as fun. 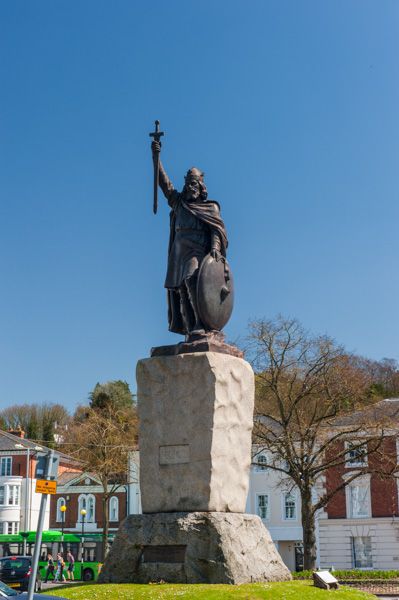 Next up I've got more infantry on the go and I've got a cannon battery waiting for me as well. In addition to the Napoleonics we've been taking a look at some dark age gaming as well. Emma is playing through Assassins Creed Valhalla and has started putting together a Viking raiding force. Being from Winchester myself I would be remiss not to build a Saxon Army to counter these Norsemen. Hopefully growing up 548 feet away from Alfred the Great's statue was a good influence on me.