By Charlie December 21, 2020
The Primaris Apothecary is a gorgeous sculpt that I have been coveting since its release, so as soon as I had enough angry bald men standing on rocks, I ordered an angry bald man standing on his patient.
The stock kit is pretty much a diorama on a base. Whilst that's very cool, I'm not a fan of my dudes conveying such a specific moment. It looks kinda weird to be standing over poor Brother Steve before the army's even taken any casualties. Besides, I like having unique characters. Here's how he turned out: 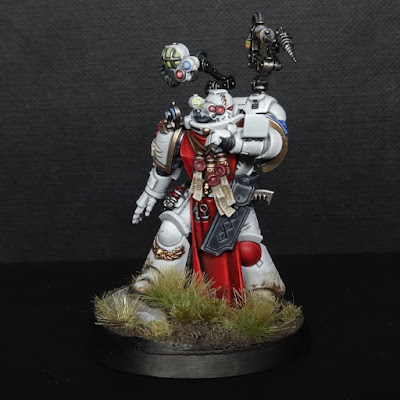 The Painting & Conversion
I don't have anything surprising to say about the painting. Everyone knows white armour is an unforgiving mistress, and I could have done more to go over the blemishes, but there's so many different details and elements on this guy that by the end I was more keen to get him done than keep fiddling. My other main struggle was the amber-ish fluid in the injector. Honestly in a perfect world I would have depicted it as a clear liquid, but I really wasn't sure how to convey that by painting in a way that wouldn't clash with visual language elsewhere on the miniature. Any thoughts on that front would be welcome in the comments section. So amber it was. Maybe blood plasma, maybe some sort of hilariously brutal Astartes drug like Resusitex... who knows.
Anyway, I've talked about the Cobalt Scions paint recipes in previous posts, specifically in the post on Captain Lucullus, so I'll move on to the bitz used for the conversion.
The left arm with the flippy flippy you'll probably recognise from the Intercessor sprue. The right arm is the bolt pistol arm from the Imperial Fists upgrade sprue, with the hand sliced off and replaced with the waving hand from the Repulsor Executioner crew.
Of course, with Brother Eudemus here having absolutely nothing in his hands, I also needed to get a pistol grip sticking out of his empty holster. There's a few bolt rifles being held somewhere other than their grips on the Intercessor frame, so some careful slicing got the job done.
Finally, the base. Without a marine beneath his boot, Eudemus looked like he was engaging in an ill-advised demonstration of Ancient Egyptian dance technique. A fat wad of green stuff soon sorted this out. Rather than spend ages sanding a smooth face where said hillock met the base rim, I sculpted a small rock face. So technically he's still got a hero rock, but it's more like a slope and less like he's deliberately looking for a lonely rock to stick his boot on. Should I have taken the time to smooth out the small bit of base rim that isn't completely flush? Probably, but it seems that in effort terms I gave Mr Apothecary something somewhere between half-assed and double buttock.
Actually now I think of it that's pretty much my hobby in a nutshell. There's almost always one or two bits of a project where I get excited and go the whole hog, and other bits that get a token slice of cheap ham. I take this as a healthy sign of perfictionism's waning grip on me. With all the perfect paint jobs I see on social media comes an acceptance that I can never be a top-tier painter, and this lets me relax a little and just do the details I feel compelled to do.
Who is Galenus Eudemus?
With Apothecaries being so central to the wellbeing of their company, it seems appropriate for this guy to have some sort of character. I normally get some ideas while building and painting the mini, but that didn't happen this time. To get things going, I rolled up some traits on Goonhammer's Random Personality Generator. Yes, the one I wrote. For some reason it feels weird rolling on my own table but that's what's happening.
The table is designed primarily for an army's leader, not the support characters, so when I rolled the Relic Hunter as Eudemus' backstory I thought haaa! Hoisted on my own petard. Particularly when I then rolled that he was doing so against the wishes of his faction. Now obviously an Apothecary doesn't have the freedom to just bugger off and perform their own personal quests, and while I could have just re-rolled, I instead decided to embrace the challenge.
I figured he's obsessed with learning of the fates of some Cobalt Scions who were captured by agents of Fabius Bile, convinced that Bile might somehow unlock the secrets of Cawl's work, and appalled that his brothers could meet a fate other than death in battle. When he's seen to his essential duties, he spends time sending messages off to other Chapters asking if they've had any encounters with Bile, and making ineffective petitions to the Ordo Hereticus for any information they might have. It's a pointless endeavour, of course. He lacks both the knowledge and the resources to find any actionable intelligence, and was instructed to let the matter die when Captain Lucullus found out what he was doing. Indoctrinated to believe the Astartes are the Emperor's wrath made manifest, though, Eudemus is unable to accept that there are targets beyond the Chapter's reach. Folded away in his quarters is a galactic map, with locations on it marking known encounters with Bile's agents as Eudemus, a total amateur in investigation, attempts to divine patterns that simply aren't there to be found.
Despite this insane self-imposed quest, Eudemus is otherwise quite humble about his skill as a physician compared to his fellow Apothecaries. Given his secret obsession he's a little slow to trust. He does, however, buy into the Scions' mission of defending (and possibly somewhat annexing) the Eridani Sector from the depredations of corruption, be it that of the enemy, or that of decadent Imperial nobility, about whom he is perfectly willing to make cynical quips. His secret obsession is at odds with his instinctive gregariousness, and his duties means he knows and is friendly with most of the marines in his own company and other members of the Apothecarion. Unlike most Cobalt Scions, Eudemus has little truck with honour and ceremony, not least of which because he often has to talk brothers out of noble deaths when they may yet be saved. 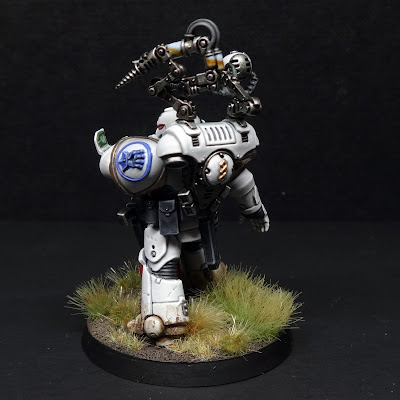 First use in-game
Eudemus' first game served as a good demonstration of how awesome Apothecaries are in the new Codex. He resurrected one of Sergeant Castus' Hellblasters following a plasma-related mishap, and also got several Intercessors back on their feet following some ork bombing runs, not to mention getting rid of a few flesh wounds. Naturally I completely forgot about his 6+++ aura, and even so, it was just great having a medic hanging out in the battle pile. My Trip Advisor review: 5/5 will deploy again.