More additions for my Ikarran Necrons today.  This time around it is the turn of the various flavours of Necron that have succumbed during the long aeons of hibernation.

So, to continue the telling of the origins of the Ikarrans and in order of age of the models: 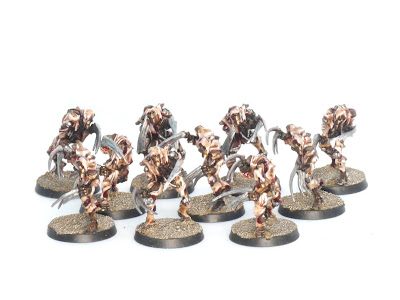 Infected by some virus, these units now seek to recover all they lost through transference, thinking that if they can harvest sufficient biological matter from their victims they will somehow transform back into their previous selves.  A true terror to their foe, they inhabit pockets of a nether dimension and phase onto the battlefield where they are least expected. 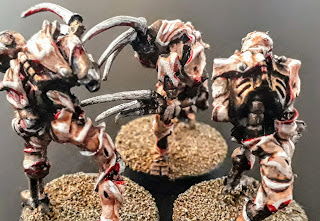 These are the old metal sculpts of the Flayed Ones, and they are absolutely fantastic, if horrifying.  It's not until you get really close that you see how the flesh is sculpted as if stretched over the skeletal frame underneath, and the way it hangs over the faces with the odd eye peering through is deeply disturbing (the close up picture above really doesn't do them justice).
Painting wise, they get the same approach as the standard warriors but then I opted to paint a very pale flesh colour over-top to emphasise the difference to the metals of the rest of the force.  I also applied Blood for the Blood God into the folds of the flesh and on the blades of their hands for a little extra gruesomeness (yes that's definitely a word ;) ) 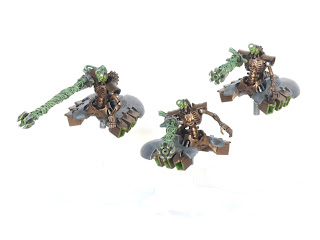 There is no virus to blame for their changes, simply the fact that their mentality has completely degraded.  The destroyer cults seek nothing other than finding the best way to bring destruction to their foes.   To this end they have allowed Canoptek vassal constructs to alter their forms such that they are completely removed from the rest of their race.  For the Lokhust, this involves the subsumption of the lower half of their bodies into hover platforms that allow them to manipulate and power the massive Gauss blasters they now wield.
As with the rest of my forces, I've replaced the old green plastic rods on the Gauss weaponry.  For these I ran a length of coat hanger to form a spine around which I twisted 4 lengths of stripped electrical wiring to represent the channelled energy. 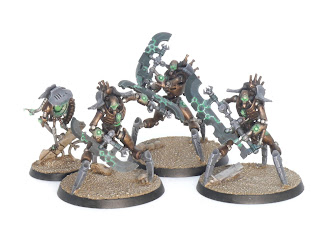 For other destroyer cult, the Skorpekh, they desire to kill their foes up close and personal.  Adding limbs and blades they scuttle forth more like the Canoptek constructs that adulterate their forms than their old selves.  Once close they become whorls of death and destruction.  There are even those amongst their cult who have "elevated" themselves to even greater degradation of form and call themselves the Skorpekh Lords. 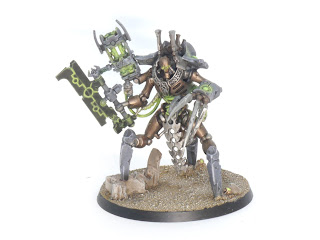 You may notice there's 3 different shades of green-glow amongst these Destroyers, that's because the old destroyers were painted many years ago, the regular Skorpekhs were the first of the Indomitus models I painted and I was just mixing greens at random, and then finally their Lord is done with the VGC Livery Green that I've settled on for the purpose of this effect in the future.  In time I'll try and go back and unify the models but for now it's only in pictures like this you notice, on the table they mix quite happily.
Coming soon will be the final post in a bit, the Nobles, but until then,
We'll Be Back!