By Andrew November 24, 2020
Today's instalment for the growing Ikarran dynasty are the Canoptek constructs, mindless automata whose sole purpose is the maintenance and protection of the "true" Necrontyr and their homeworlds.  By their very definition, these units can be a little dry or bland for the more narrative kind of experience I like, so with my apologies to fiction writers everywhere I plan to include a snippet of colour text that has been knocking around in my head that helps me bring them to life.  If nothing else, it'll give you all an insight into how I imagine these delightfully spooky constructs would act.
First up are the Cryptothralls, or murder-barrels as I like to think of them (left and right, I'll cover the central Cryptek in a later post).  With their backwards angled blades, and extremely hunched poses these are glorious models.  The centralised glowing power orb (not really visible in the image below sadly) is a new feature that seems to be a common theme in the Canoptek range and clearly indicates they are very much constructs as the majority of their torsos are taken up by it.  They also have dinky little sub-beards to tie them to the much more impressive beard on the Cryptek and reinforces the ancient Egyptian vibe of the range. 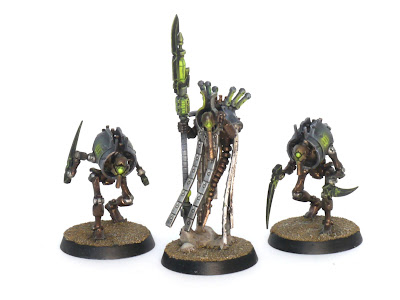 The Thrall steps forward to the next alcove. Its X-ray resonance occulus inspects the Warrior chassis occupying the alcove, identifying and tagging the metallurgical flaws that have developed over the aeons of hibernation. The gestalt presence monitoring its function registering the flaws and assigns scarab units to enact repairs prior to the unit's revivification.

The Thrall steps forward to the next alcove.  The expected Warrior chassis is completely subsumed by biological and organic contaminants of unknown designation. Expanding its sensory perception, thermal and electro-chemical activity is revealed, as well as rythmic, oscillating atmospheric pressure waves originating from the corruption in the alcove. This level of contamination is unacceptable and so the Thrall's occulus switches to eradication mode and a focussed beam of X-ray energies is emitted, corrupting the biological matter and breaking down its molecular bonds. The atmospheric pressure oscillations briefly increase in frequency and amplitude until a significant fraction of the organic matter is disassociated before they cease.

The Thrall is aware of the gestalt's increasing presence in its thought routines, activating additional processing routines to better examine the source of this contamination. Its sensory perception widens significantly to encompass the surrounding crypt volume and quickly detects multiple additional sources of biological contamination all of which are also emitting similar atmospheric pressure oscillations. Ultimately, the Thrall experiences the complete subsumption of its autonomic routines as the gestalt takes full control, the dissembling blades of its arms extending.....

Some indeterminate period later the Thrall's autonomic routines re-establish.  Scarabs are removing large quantities of organic contaminate from the surrounding volume of the crypt.

The Thrall steps forward to the next alcove.

Another of the Indomitus models, and a new and very sinister looking approach to these constructs, the Canoptek Reanimator.  I really love the design aesthetic of these new units, the tall spindly legs, bulbous body, tiny head on a flexible neck.  I can almost imagine them floating over the battlefield, their legs barely touching the ground and their heads scanning back and forward. 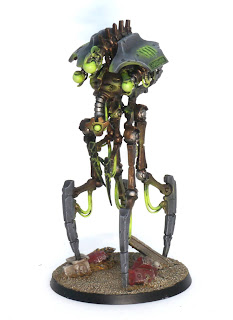 Of course as soon as we saw the Reanimator, and then the Canoptek Doomstalker below, pretty much everyone in our group immediately thought of War of the Worlds.  Now, I can't even look at these models without a little part of my brain going:  "hoooooooooonk!"
The Doomstalker is just about my favourite model in the whole range right now.  The creepy new WotW aesthetic coupled with the absurdity of the Doomsday Cannon just tickles me :D. 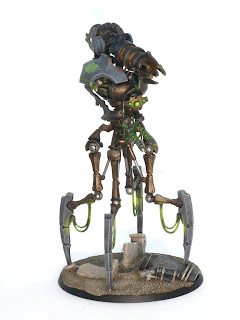 What I wasn't completely expecting was quite how big this unit is.  I thought it would be the same chassis as the Reanimator but it is seriously larger, its legs are almost as tall as the entire Reanimator model.  It has such a commanding presence on the board, but is effectively impossible to hide so of course in its first game (back before the UK went into Lockdown2 - electric boogaloo) it was annihilated before it even got a chance so I have no idea whether it's any good. 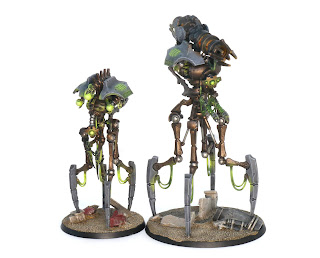 That's probably enough for today, I've got a couple more posts in the offing so keep your eyes peeled for Destroyers and Nobles in the coming weeks.
Cheers
Andy