In Defence of Firestrike Servo-Turrets

By Charlie November 30, 2020
I've seen a few people on social media suggesting that it's thematically inappropriate for Space Marines to have a defensive turret, and that therefore, the Firestrike Servo-Turret shouldn't exist. Since this is obviously the most important debate of our time, I'd better weigh in.
My position is that those people are talking out of their butt trumpets.
In the manner of any rigorous argument I should begin by declaring any biases that might affect my judgement. My biases are twofold. Firstly I like the overall look of the mini even if there are elements I find silly (more on that later). Secondly I like it thematically for my army, since visually it makes me think of a Roman ballista supporting their heavy infantry.

Even with those two factors, I was still on the fence until I saw 40K Badcast host Campbell's paint job of it. Five minutes later I'd smacked the buy button. Which is weird, given that I've been much more minimalist with mine. I was very tempted to emulate Campbell's hazard stripes on the side of the blast shield, but it felt too much like theft, and what's more said stripes are an aesthetic that doesn't show up anywhere else in my Cobalt Scions force. Here's how my much more bland minimalist effort came out:
There's some conversion work in there but I'll cover that later. No one will care about the conversions when I haven't finished informing the internet of my position on the crucial issue of defensive turrets. Without further ado let's look at the assumptions made in the argument that marines shouldn't have defensive turrets:
To the first point, I could just point out that there's an entire chapter (the Imperial Fists) whose schtick is defending stuff and practicing stoic looks in the mirror. But I'll go one further than that and point out that while Astartes excel in shock assaults, they are expected to be gurt hench in all forms of warfare (with the permissible exception of the suicidal human wave). It scarcely needs reiterating that marines defending stuff in static positions have featured among some of the most famous battles in the setting, be it Macragge, the Fang, Baal, the hives of Armageddon... one could go on. Also they seem to have a knack for ending up piled up around a banner surrounded on all sides, but that's by the by.
To the second point, this isn't specifically a defensive turret. It's a support platform that, thanks to anti-grav plates, can comfortably keep pace with an infantry formation. If you combine its move of 3" with an advance roll, it is on average the same speed as regular infantry. To my mind this means it moves up with them, then switches off the anti-grav and settles down to lay covering fire as they complete the final movements of their assault. This means the servo-turret can be used both offensively and defensively. Unless, I suppose, you're doing an all-mechanised army, but that's very much an edge case. You might equally well move it into position to enact an ambush, since it wouldn't generate as much noise and heat as a vehicle. Plus, nothing says 'stealth' like a giant blue blast shield, amiright?
From a purely competitive perspective the servo turret is probably outperformed by other units, but from a lore perspective, I think this thing makes about as much sense as anything else. If you disagree, feel free to come at me in the comments, whereupon I shall take yer nan out to a lovely seafood restaurant and never call her back.* 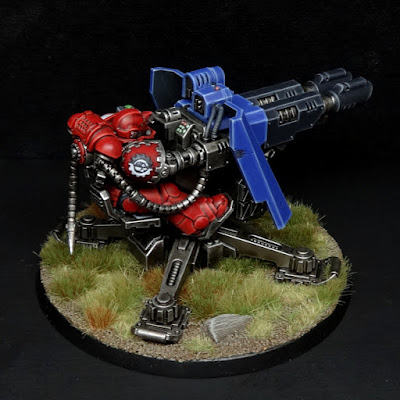 With that case firmly closed, the one other lore question is... can a chapter really afford to waste a techmarine on manning a turret? Now this, and the question of vehicle crews, leaves a lot more room for debate. My headcanon is that there's levels of techmarines ranging from the proper techpriest-level marines to the more low level dudes who know enough about electronics and mechanics to maintain their vehicles. The low-level dudes, who I imagine to be called something like techmarine-adepts/initiates/novitiates/whatever, would of course be working towards becoming full techmarines following their training with the Mechanicus but must first spend some years familiarising themselves with the Chapter's war machines. That would also explain why some official vehicle crews are painted as regular marines, and some as techmarines.
To close out today's post, I did say I'd cover what little conversion work I did on this kit. This was basically limited to removing the various wires connecting to the gunner, since it made no sense to me that if he had his dataspike mechandendrite plugged straight into the thing, he'd need three other cables plugging into his eye and, yes really, his navel and his right nipple. The eye cable in particular is some hench-ass cabling one might use to provide an ethernet connection to half a bloody office block, whereas I assume that once he's plugged into the turret, it'd just wire the footage from the blast shield lens into his HUD.
Having snipped the cables away, the only other thing I had to do was fill in the hole in his eye socket with green stuff to make it look like a bionic eye, at which point, job's a good'un.
If I were to get a second turret I'd also be looking into using biker bits to replace his right arm, because I refuse to believe that there's a sign in the turret section of the armoury saying "you must be this armless to enter."
Finally, it's been a minute since I posted a picture of how the whole force is coming along, so here's my Cobalt Scions force so far:
* Obviously I'll be very polite, since everyone who comments on the blog is very civil. Don't hate me for committing to the bit. If it can be called a bit. Which it can't.