Rubble in the Tubble: adding rubble to city ruins 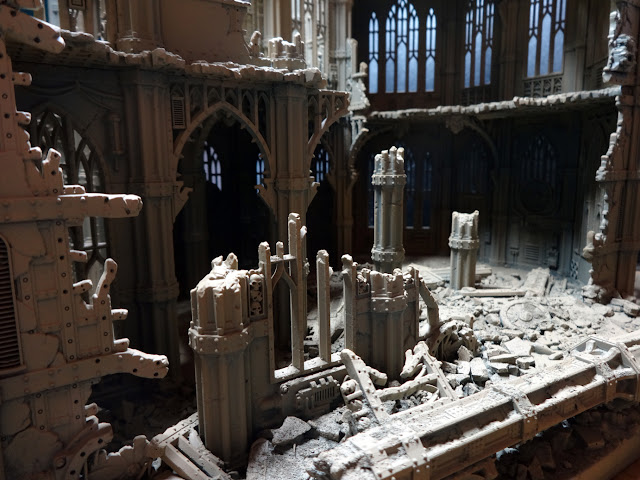 Like most longtime 40K players I have a lot of ruined buildings covered in skulls. But now--at last--I  have a ruined building covered in skulls with actual rubble and a base. Ye God-Emperor, it makes a big difference. Today, then, I'm going to explain how I went about doing that rubble incase you're rubble-curious and want to have a go yourself. I'll also cover making the big honkin' styrene base.
This is part two of my Chapel Project Log, the first part of which covered some tips and tricks for working with the Sector Imperialis kits. At the time of writing the building has been spray primed, but the actual painting hasn't started.

The base is a combination of styrene sheets and rods. The sheet was cut into squares the same size as a Sector Imperialis floor panel to add some visual interest, and these squares were then poly cemented to a grid of square styrene rods. It turned out Revell's contact cement wasn't quite hench enough for this task - the joins came out somewhat brittle - at which point Tamiya's contact cement got deployed and did a much better job. 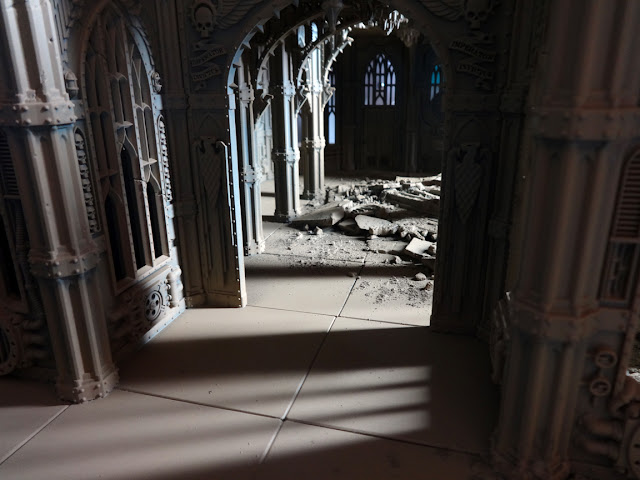 I'm still torn as to whether it would have been better to use a slab of MDF to use as the main structure - it would have been stronger - but at least with this method the chapel can still sit over any raised details on the board itself, and the building is very firmly stuck to its mount.
Anyway, my course set, I glued all the squares and rods together, then reinforced the joins with various offcuts. Here's a photo of the bodge-tastic underside:
Once the base was dry I sanded down the sides, then carved divets in where the individual slabs joined.

A Spruesome Starting Point
This first step could be done with whatever material you like, but feeling bad for the sheer amount of sprue I was about to bin, I chopped down a bunch of sprues and used them to add some height to the crap-pile. While stripping down the sprue into rods, I chucked the offcuts into a pot and then used that for loose rubble, which I flooded with extra thin cement to hold it all together. And also kill half my brain with fumes. 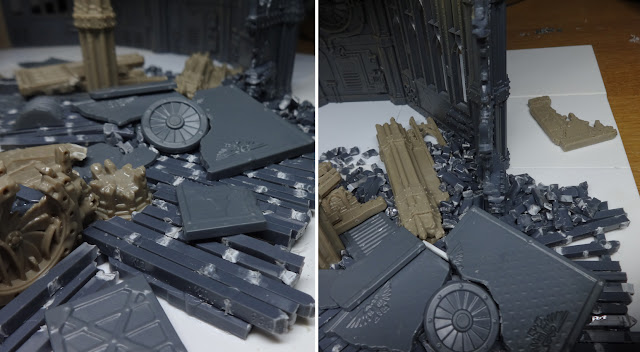 Since hobbyists are trained from birth to recognise sprue at a glance, this sprue gets covered up by other stuff later; this is just to get the rough shapes in. It would definitely be faster to do this with other materials, but this way the rubble is very securely attached to the base, and you're putting less plastic into landfill.
In the photo above you can see the beginnings of some of the surface detail. Some of this is distressed Sector Imperialis components, and the rest is from the extremely useful Sector Imperialis Large Base Detail Kit.
Important Tip: but can anything actually stand on it?
Building a giant pile of rubble is a great way to give your troops a case of Wobbly Model Syndrome. To avoid this problem, I kept an intercessor and a guardsman to hand while assembling the rubble and regularly put them on the pile to check they could still stand up on most of it. This is a process I repeated all throughout the next steps I'm going to describe. I'm not saying you could stand a model up on literally every square inch of this thing, but there's plenty of capacity for squads to stand on it and beat each other to a squishy pulp.
Surface Detailing
To prep the crap-pile for surface texturing, I plugged any offensively big gaps with green stuff. I could've used filler or whatever else, but green stuff is easy to control. 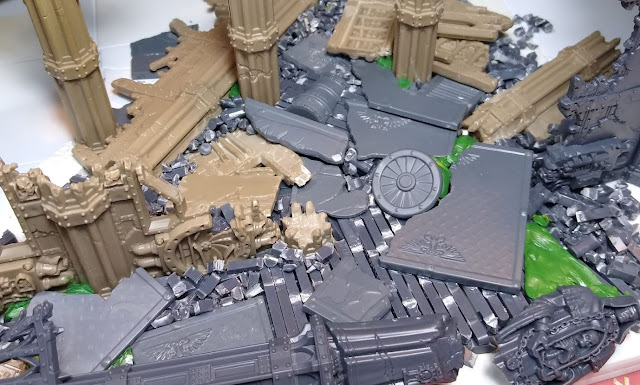 Next came some chunks of plaster. If you cast up some plaster in a thin sheet about 3-4mm deep, you can break it up very easily with your hands and get the look of shattered concrete/plaster walls. I used a hot glue gun to stick down some bigger chunks, with the added bonus of the hot glue working like filler in any particularly big voids.
With the bigger chunks in place, I flooded the area with PVA/white glue and dropped all the smaller chunks of plaster into the glue, after which I sprinkled some extremely fine sand/dirt over the top to look like dust. Finally, to seal it all, I used a trigger spray filled with watered down PVA, which is way easier than painting all that glue on by hand. 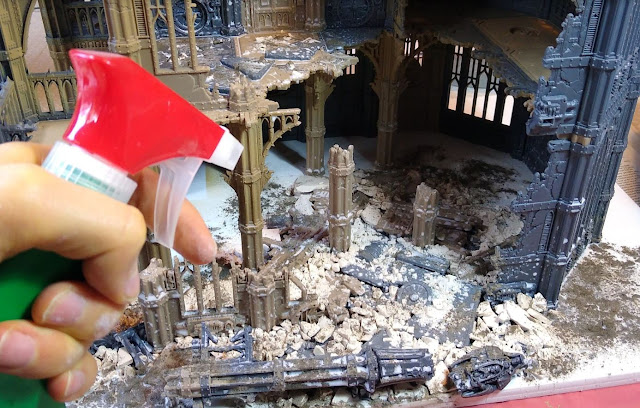 Priming the Model
This was done with an initial coat of Mechanicus Standard Grey, and then a fairly heavy but deliberately inconsistent zenithal spray of Zandri Dust. Here's some photos of where it's at now, all ready for me to take a brush to it: 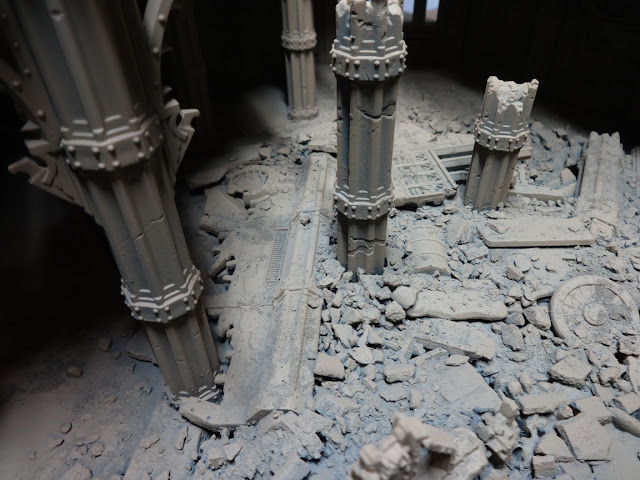 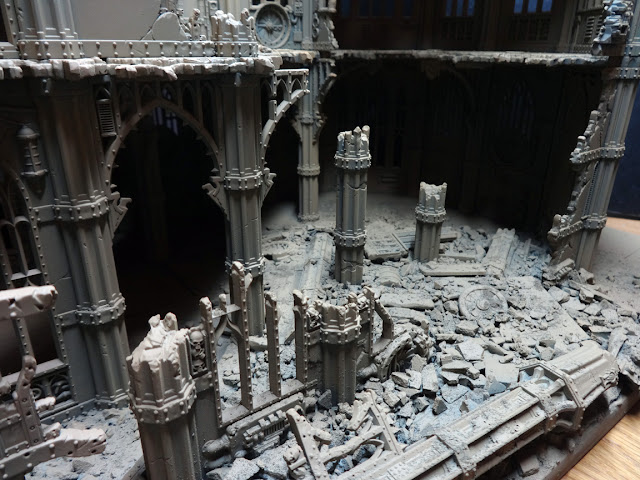 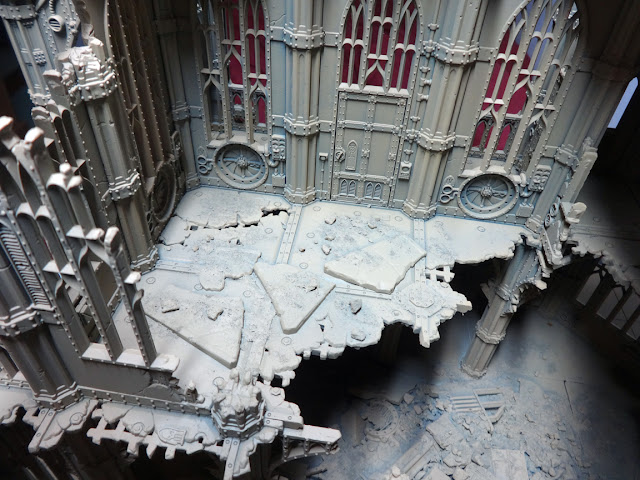 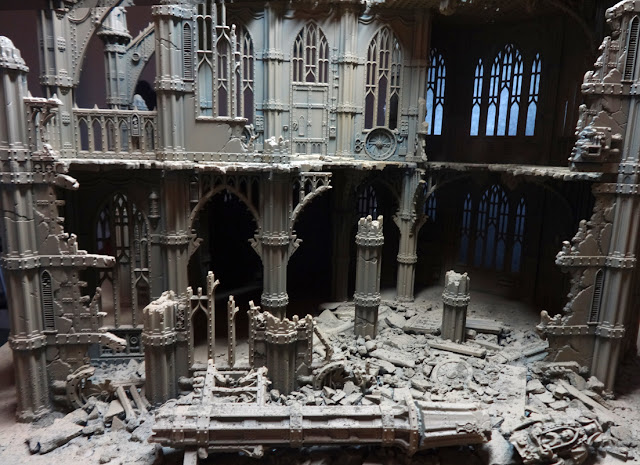 Naturally if you have any suggestions or questions about a particular thing, leave a comment below. Now if you'll excuse me, I'd better go and read my drybrushes their last rites.