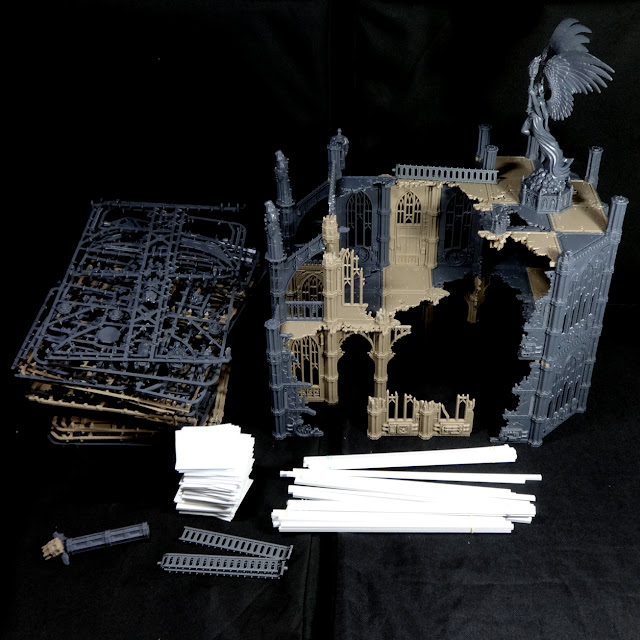 If you've yet to really dig into the Sector Imperialis terrain, today's post will hopefully equip you with some useful knowledge. It will also serve as the start of a project log for my "modestly sized" Imperial chapel.
Step 1: check out Ray Dranfield's Twitter feed.
Like the Sector Mechanicus terrain (see our modular build for that stuff here), these things were created by GW's mad terrain genius Ray Dranfield, and honestly his assembly tweets on his scenery kits were more useful to me than the official instructions.
His main Twitter feed is here, and someone made a helpful compilation of the Sector Imperialis tips here.
Step 2: get inspiration.
I think the thing that finally pushed me over the edge of wanting this terrain in my life was Peachy's Kill Team table. The big thing was seeing how it still looked fine if you didn't go nuts with all the details. That made it a lot less intimidating.
I spent some time imagining different designs in my head. Some of the stuff Ray demonstrated on Twitter fed directly into the designs I went for, particularly the balcony. Image searches and general browsing on social media also showed plenty of other possibilities.
Step 3: plan.
It would be easy to go nuts and just buy a crapload of stuff, but I knew that if I did that I'd get overwhelmed by all the grey sprues. Instead I decided how much money I was willing to spend and looked at how far my money would take me. Luckily I had a big headstart courtesy of Nick, who had kindly donated the Kill Team boxed game terrain to me... months... err, years ago?
The key thing to know is that if you want an appreciable amount of intact elements of your terrain, you're going to need a lot of sprues. This, for me, is one area where I dearly wish GW just allowed you to purchase each frame as a separate thing on the webstore, since terrain is the one area where this really would prevent crucial components such as railings and flooring being locked behind the paywall of "you can only have this if you also want a giant statue."
As it is, I have a lot of ruined wall sections which... I guess I'll make some low-lying scatter terrain out of. Maybe. I'd hate for all this surplus stuff to go to waste, but it had little to do with the big-ass building I wanted to make.
I did use eBay to pick up an extra railing sprue, but really I would've wanted 4x railing sprues in a perfect world, and the going rate for that one quarter-sprue on eBay seems to be about £20, which gets expensive fast.
So, one Battle Sanctum and Sector Imperialis Sanctum later, I was ready to get clipping.
Step 4: figure out what the building looked like before it got blown the fudge up.
This is desperately important and something which I've seen a lot of folks not put any thought into, which results in ruins that instinctively don't make visual sense.
By figuring out exactly what this chapel looked like before it was blown up, I now know where I should stick things like broken columns, shattered flooring, and where the doors should go. I also made a point of using the panels which block line of sight on the ground floor, which I appreciate isn't so necessary with 9th edition's terrain rules, but will be useful in Kill Team and whatever else we play. Of course, I did make it somewhat easy for myself by having the building look intact from one side:
One thing I wanted to do with this building that I'd missed in other city ruin projects was to try and get away from just doing a flat rectangle. Don't get me wrong, it's still a pretty standard shape, but recessing the front entrance and having balconies on either side really helped add visual interest and also provides more in-game hiding places.
I also used the placement of the second floor's walls to inform where I put columns on the ground floor, so that the building looks more structurally feasible.
Step 5: get stuck in!
OK so at this point I'm going to shift from broad brushstrokes of advice to specific things you can do with the kit.
First up, it's important to note that the broken column stumps are designed to fit in either direction, which has allowed me to make this shattered column only just managing to stay in the air: 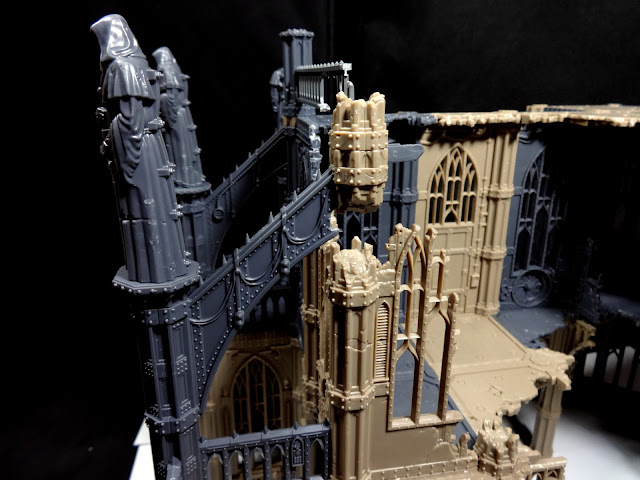 Almost everything in these sprues is designed to fit with everything else. Case in point, you can see how different ruined floor sections can go together to make crumbling panels: 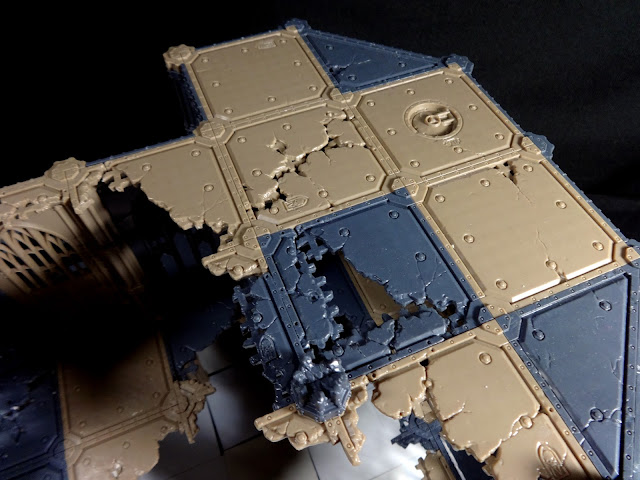 Making custom railings
Given the unfortunate expense of getting sufficient railings to do the roof properly, I was forced to improvise. For this I'm using some spare Sector Mechanicus ladders. You can see a distressed ladder in the image below precariously clinging on to a ruined column: 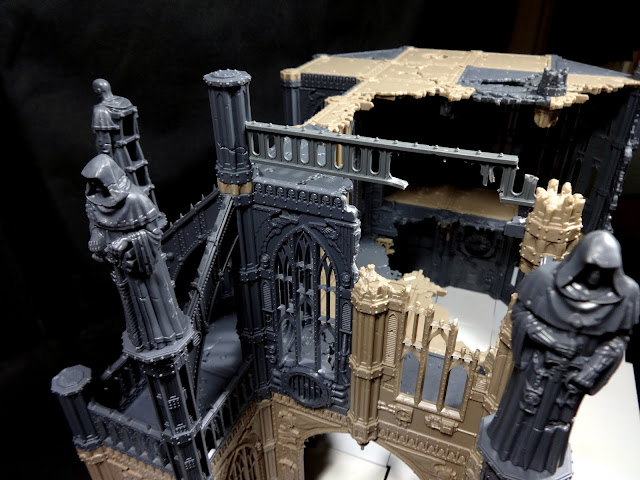 Obviously I still have to add ladders the rest of the way around the roof; it doesn't look nearly as good as the proper railings but the roof just looks weirdly flat without some sort of detailing. Plus this'll help minis gain the benefits of cover in-game.
Making custom flooring
I'll report back on how this goes in my next post, but the issue was that I wanted to make a proper base so that I can do proper rubble, ruined pillars, and so on. The problem? Flat plasticard would look too plain, Zone Mortalis floor tiles don't line up with Sector Imperialis floor dimensions and look too industrial, and flagstone-textured styrene sheets looks insufficiently sci-fi.
The compromise I've settled on is to do plain concrete styrene squares, which I'm going to distress and bevel to add some minimal visual interest. These will then be reinforced and lifted up by 4mm square styrene rods. This will have the added advantage of the base having voids in it that will make it that much easier for the piece to lay flat on the gaming board even if said board has one or two raised details on its surface. With all the floor being styrene, it also means I can use poly cement to stick the building onto its base, which will be a lot stronger than the other options.
It remains to be see how it'll look when it's all carved and stuck properly in place, but here at least you can see the vague idea: 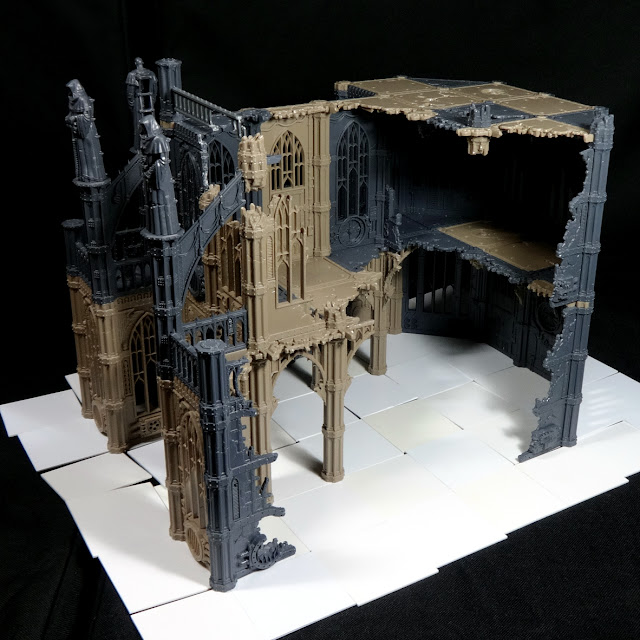 Closing thoughts:
Worryingly, the Sector Imperialis Basilicanum kit has disappeared from the GW webstore, and was the only way of getting the sprue with the extra floor supports (the ones in the beige plastic in the image above). My hope is that they're still making a new run of them with the new 40K box art, because I was 100% going to buy that kit as part of this project, and was forced to downsize my plans. Fingers crossed that it comes back!
That's it from me today. Please link any of your own Sector Imperialis projects or particularly good examples on the wider internet; I can't amass enough ideas for this stuff. Omnomnom. If nothing else, it's been a lot of fun to build.