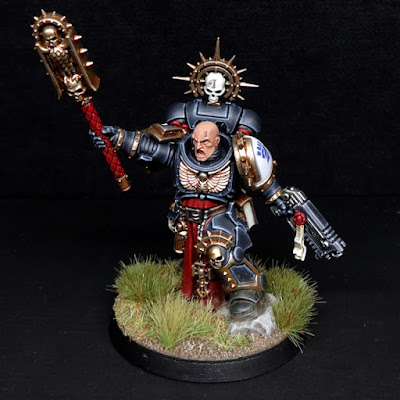 The Indomitus box mostly offered lovely sculpts that were thematically wrong for my army, but the Indomitus Chaplain jumped right into the category of DIS SPACE MAN PRETTY, PUT HIM RIGHT IN MY FACE PLEEZ. One eBay split later, the deed was done. Today's post is therefore a celebration of that most classic of 40K archetypes: a shouty bald man standing on a rock.
It's a small rock, because he is a man of taste. A man of refinement. The sort of man you could take home to your Reclusiarch and who could hold his own in the inevitable bout of competitive xenophobia.
Why a head swap?
The mini's original half-bionic head is great, but I can't be dealing with a character that looks exactly the same as the standard kit because I am a special special snowflake. This, therefore, is my stab at winning the regional semi-final of the "technically different" kitbash also-rans chufty league. 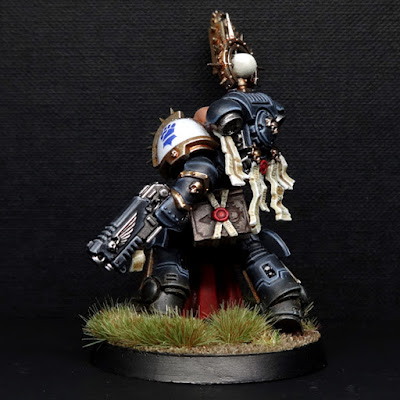 Le painting
There ain't much to say here that I haven't already said in previous Cobalt Scions posts, aside from the fact that I added glazes of Army Painter's Chaotic Red to darken the robes and crozius handle to prevent the red overpowering the rest of the mini. Arguably this resulted in the overall mini having insufficient contrast, but at least I hope it helps the head be more of a focal point.
The black armour was highlighted up with a blue-grey mix to try and differentiate it from the rubber seals, but I didn't push that far enough to be remotely obvious under certain lighting conditions. Fun fact: the final edge highlight is the same colour I use to highlight my regular bright blue marines - Fenrisian Grey.
I usually use moulded Imperial Fist shoulder pads on my dudes, but the giant spiky shoulder pad was too cool not to keep, so I had to freehand the fist icon. It's actually less faffy to freehand the icon rather than paint the moulded version, but in no way could I get anywhere near the consistency from model to model doing freehand. 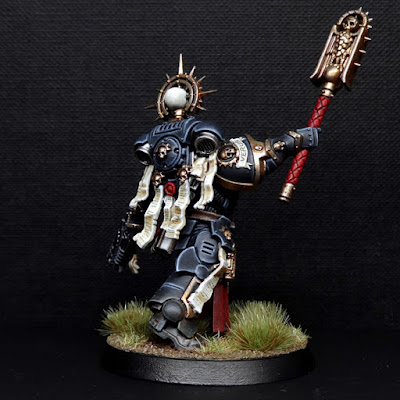 What's his story?
Caius Verus has been the chaplain of the Third Company since he was awakened on Mars at the start of the Indomitus Crusade. When he woke, his experience was similar to his brother-marines; it was hard to trust that this wasn't just another simulation, and harder still to believe that he was now expected to provide rousing rhetoric in the heat of battle. He was far from alone in his uncertainty, and took some comfort from that.
Said comfort evaporated at the start of his first battle, when he was horrified to find himself delivering a speech that he'd neither written nor imagined. He felt as though someone else was operating his larynx. The speech itself lacked flair or context; it sounded to him like the tired platitudes that one might be subjected to by an Ecclesiarchy auto-hailer when passing a temple.
For weeks, every time he opened his mouth to boost morale of nearby allies, these rote speeches poured out of him. To the other Scions, they were the only speeches they'd heard in battle, and seemed perfectly normal. To Verus, the sermons stuffed in his head sounded almost as though they had been written by someone who barely believed in them, and he was determined to do better.
He snatched what time he could to study rhetoric and oratory for himself. Over time, he learned to suppress autonomic catechisms in favour of his own efforts. They lacked flair, and did little to inspire his brothers, but Captain Lucullus encouraged him to persist even if it meant failure in the short term. Progress was slow and demoralising, but with Lucullus' persistence, Verus grew wiser.
After decades of war and study, Verus eclipsed his tutor. Where Lucullus' dry, rational dialectic is useful for dealing with scheming politicians, it has little ability to turn a crowd of citizens to their duty. Verus is almost the opposite, capable of inspiring citizens and Astartes alike, although shrewder minds are less likely to be swayed. Rationally, Lucullus knows their skills are usefully complimentary, but he envies Verus' charisma and popularity. This occasionally seeps out of him in the form of aphorisms warning against using platitudes over substantive points, but Lucullus recognises this as the fruit of jealous vanity and does what he can to suppress the instinct.
Verus, for his part, now relishes his role, and some say is destined to gain rank within the Reclusiam. For now, he intends to remain where he is to show loyalty to Lucullus and the Third Company - a loyalty which, arguably, now holds him back from achieving all that he could. 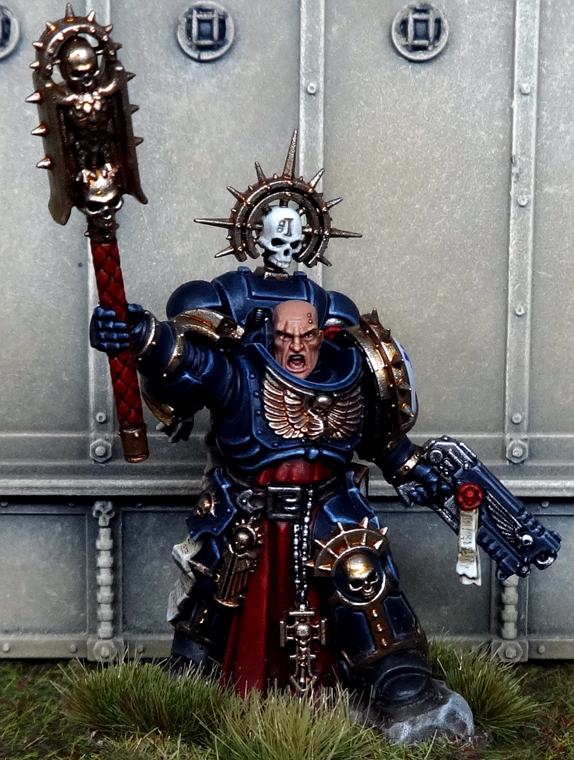 What's next for the Cobalt Scions?
I really, really need a third troops unit, but I want the modular assault intercessors kit to come out so I can kitbash it with the regular intercessors and I've no idea how long it'll be until that kit is out. I have some other stuff to keep busy while I wait, including a new terrain project. Oh, and playing games, that's good too. Not that there are many opportunities to play said games given the current need for social distancing, but mercifully I now have a fellow nerd in my social bubble and am therefore getting a steady supply of mortal wounds delivered right into my face by her ----ing Farseer.
As ever, if you have thoughts on the paint job, Verus' background, or frankly anything about spehs muhreens and the impending codex, collar me in the comments section.