When we think of Chaos, we usually think of them hurtling toward the enemy, eager rend with blade, tooth and claw. But there are those who give praise to the Dark Gods in other ways, those for whom the scream of the lascannon and the roar of the missile launcher are prayers. I speak, of course, of those who band together into the Havoc cults:

Havoc cults y'say? Ah, yes, time to introduce a notion for my Word Bearers head-canon. I figure all the specialist squads are akin to the Roman Mystery Cults, a place to show your devotion in a very particular way. Some will spend only a short while in them, to learn the Mysteries, some will devote their lives to them. It seemed to work well with the way the Word Bearers work. 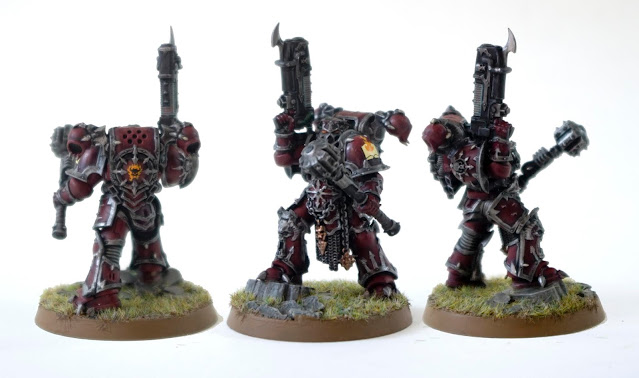 I'm awfully glad I'd waited to build these till the 9th edition came out! I was going to stick a flamer on this chap as an overwatch point-defence system given that it used to be automatic that you could just hose an attacker. Now that it is more of A Thing to pull off I decided to instead arm my Havoc champion with a weapon that he could reach out and touch someone with. A plasma gun seemed the most pleasing option, and if anyone gets close? Well, that power maul is now S7 so bring it on.

The Reaper Chaincannon, an anti-infantry firepoint all by itself. I've not waxed rhapsodic about the sculping of the chaos range for a while so if you'll indulge me... LOOK AT THIS THING! The ammo feed is stunning, you can follow each individual link holding it together and it just falls together. Being long enough in the tooth to remember trying to make metal kits work for devastators this is damn perfection. There's other bits in the range where the digital sculpting really makes itself known, the missile launcher backpack I was talking about last time? The extra missiles have the negative space of the shape of the backpack they are designed for modelled in. They just drop into place in such a satisfying way. 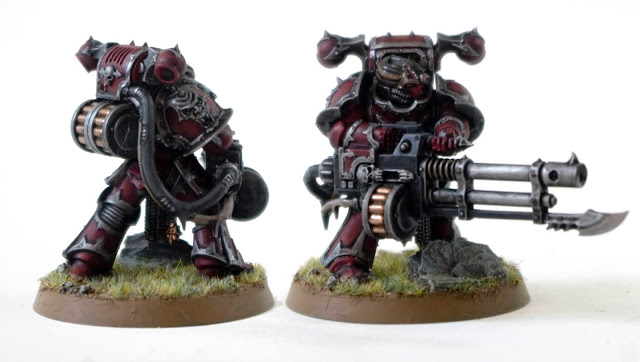 I also love how the havocs are more than just "Dudes With Big Guns", they're plumbed into their weapons. Forests of cables stretching from the helmets to the backpacks to the weapons. The marine and the weapon are one. Plus the bigger bases allow for a nice braced stance that means they look stable and ready to unleash hell. Note how there's a lot of reasons there why they could be better at firing on the move... so why, why in heavens name did you make "they've got claws on their feet" the reason G-dubs? It's so dumb. I mean... even the fact that they could have had up to 10,000 years of practice would have been better. Daemon haunted gunsights, luck of the gods, anything. Nope, claws. Sigh. 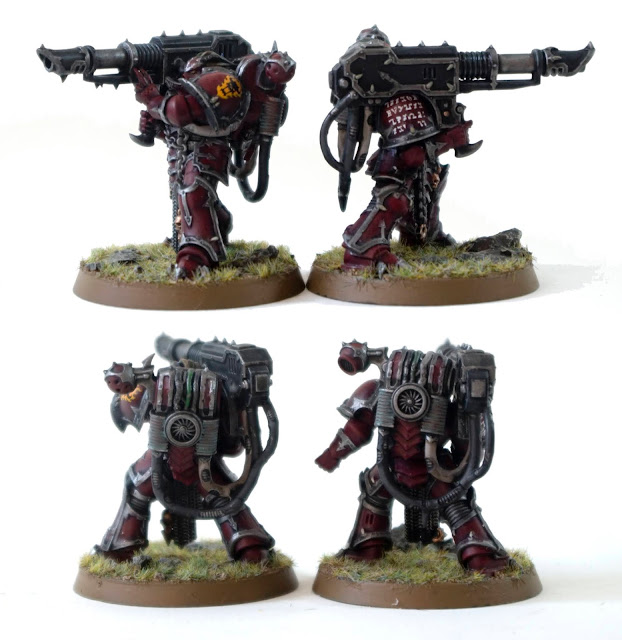 The pait of lascannons are very much my "I would like that tank over there to go away now please" option. Again, stirling sculpting work there, love the sort of lead-acid-battery style stack of metallic plates on the backpack. Nice archaic feel to the lascannons.

And with that, we have unleashed destruction and need to go and have a bit of a sit to get over the excitement. I'll be back on the next Tainted Thursday with another Word Bearer update. I think this one might come from the slightly whiffier bits of the warp... Until then, lovely people,