Welcome, one and all, to a very special Tainted Thursday. For today we reveal the head of the snake, the great minds behind this Word Bearers army, the Lords of the Graven Star: 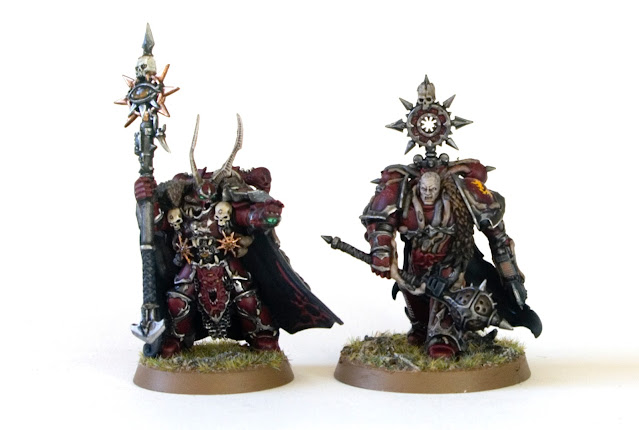 These are the two gents - fine, well balanced chaps I'm sure you'll agree - who will lead the Graven Star from Sicarius and descend upon the Imperium in a tide of blood and hatred. There's two chaps to talk about, but it would be rude not to start with the boss... 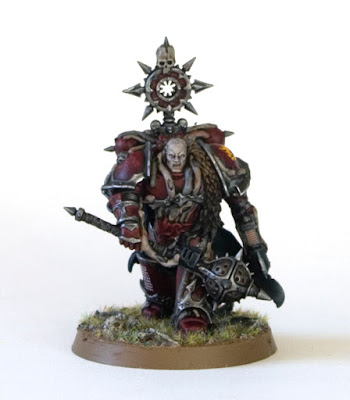 Before I launch into the modelling and painting of my Lord, let's find out a little bit about him from our soon-to-be-not-very-mysterious-at-all narrator:

"Kneel fool! Keep your head bowed until he passes, that is Lord Daroth Khoura; Hopeslayer; Scourge of the 500 Worlds and Chapter Master of the Graven Star. There, you can chance to gaze upon him again, it should be safe now. Hmm? Oh, he has led us for hundreds of years, thousands if you keep sidereal time. He acceeded to the Mastership of the Chapter after Lord Verok Ennat Ascended to his final glorious form. Violent days, those, the 500 worlds in flames, locked in conflict with the hated Sons of Gulliman and just as Lord Ennat ascended we hear the news. Horus is dead. The Imperium won. Those idiots had failed to besiege a single planet.

"In the bitter days that followed, our leaders turned on one another seeking the correct path following their defeat. Let us say that Lord Khoura's vision and might prevailed and he now wields the Cursed Crozius of Ennat.

"Now, we are moving into another of these times. Did you see the flesh melded with his armour? He can no longer remove it and the changes are accellerating. Soon we will lose another Lord, whether to Apotheosis or ruinous fleshchange we cannot say, but we live in interesting times and they always breed opportunity for men of vision." 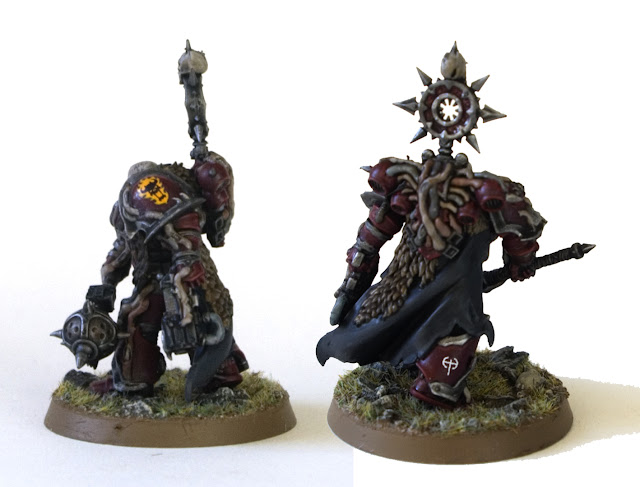 Given how many Blackstone Fortress elements I have used in this army (and there's more to come), it will come as no surprise to see that I have used the Blackstone Lord as the basis for my leader. He's a cracking base model for a word bearer but needed a few quick tweaks. Firstly, I removed the topknot, I wanted to do some fancy runes on his head, and shaved down the Black Legion icon on his shoulder. Secondly I added one of the chaos icons from the marine kit to his backpack to enhance his height and frame his head. Finally, realising something was still missing, I replaced his thunder hammer with the head of one of the Dark Angel Deathwing maces which makes a rather lovely Cursed Crozius. Finally satisfied, I got on with the painting.

It is fair to say I'm a bit chuffed with how he came out. Most of the painting is the same as the rest of the army, just with more careful shading and highlighting and an extra final highlight. The flesh tubes were painted the same as the Venomcrawler - always helps to tie themes together across an army - and the furs became grizzly bear brown. It was always going to be the face where I got excited. Khoura shares the same pallid skin as the rest of the Graven Star, but I pushed the contrast in the eye sockets with purple wash to make him look more disturbed and ill. Then I got really excited.

See, recently I started using some magnifiers - the sort that clip over your glasses - because my aging eyes had started to protest about being forced to see things from a couple of inches away. These have been a life saver. It turns out that I wasn't getting sloppy, I couldn't see! With my vision unimpared I fell to replicating Colchesian runes all over his shiny, shiny bonce and was a happy Jeff. I think he'll make a fabulous leader and am particularly looking forward to unleashing him on Charlie's shiny shiny Scions. But that's not all folks, we have one more leader of the Graven Star to meet: 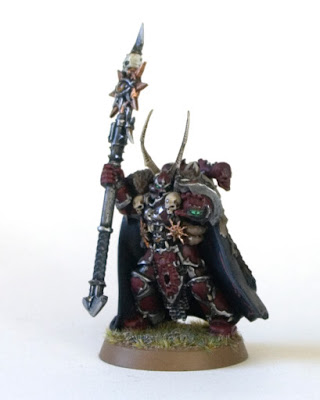 Yep, can't have Chaos without magic and a nice Chaos Sorcerer was a must. I'll talk about his creation in a moment, but first I feel we really need to get to know this chap in particular...

"Ah, I see it in your eyes, the falsehood is failing. Very well, let us dispense with this charade. My name is Orcus Kairon, not my true name of course, don't be so foolish as to think I would allow you to conjure with that. No, Kairon is merely the name by which I go among the Graven Star. Hmm? Why am I revealing myself now? Well, honestly I am sick of extolling the virtues of lesser men while I go anonymous. No longer, because you see, all this is by my design. This plan has been hundreds of years in the making. Ever since I witnessed the elevation of Lord Ennat. I realised as I watched that at the moment of reshaping of a mortal to an immortal then is when the Gods bestow their new Name. You understand the power of Names to a summoning I trust?

"Well, at that moment I was resolved. I would craft the magics and ritual necessary to aid in ushering a newly minted Daemon Prince into the Empyreal Realm and at that same moment learn it's most precious secret. So yes, I have guided and protected Khoura. Yes, I have manipulated events to grant him favour and attention. And yes I have chosen this moment to descend upon the Imperium and light the pyre that will illuminate his path to demigodhood. And then, THEN, I shall be unstoppable. I shall have the ear of the next Lord and the power of a Daemon Prince at my fingertips! I shall RULE...

"Yes, I can see from your expression that you are nervous to have this knowledge. Understandable, my plans are dangerous and secrecy is paramount. No, no, do not look so alarmed. You will not end your life in this moment, my ritual blade piercing your heart. No, simply look at this glyph, see it shine and twist, let it in... Hmm? Who me? Oh I am no-one terribly important, let us continue this way..." 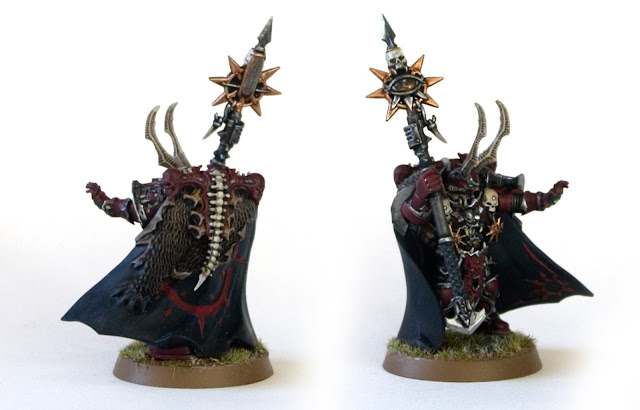 That was fun! Now for the painty bits. This lovely, totes trustworthy chap, started life - as rather a lot of my lads did - as a Dark Vengeance model. This time the lord. He had a rather nice demon weapon which I considered leaving as his force sword for the longest time but honestly? As time went on it fit less and less with the image I had in my mind and in the end a conversion was called for. I replaced the demon sword with a Terminator Sorcerer staff and removed the plasma pistol, replacing it with the hand from a Tzeentch Sorcerer. I really liked the eye in his palm. Given that Hexwraith Flame has been the colour of magic in this army I painted his eye lenses and the eye in his palm that same bright, glowing green. Everything else is pretty much standard word bearer.

And that's all for today! Lots more to come including some extremely choppy cultists. Until then, lovely people...