A Handmaid's Tail - Daemonettes of Slaanesh

Welcome to another Tainted Thursday, fellow devotees of the Great Four. Today, the air in the bunker seems to have taken on a somewhat more perfumed aspect than normal... 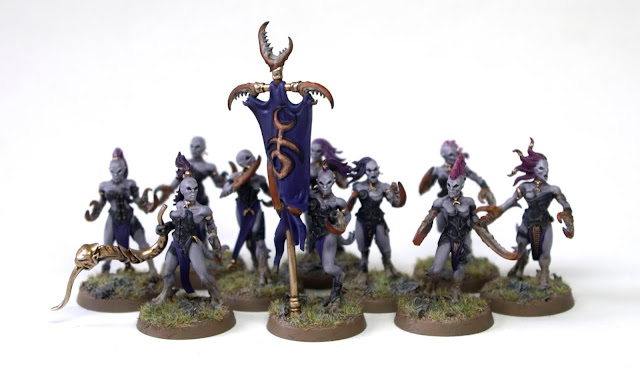 Yep! Through another rift in realspace stride a third unit of daemons. Joining their hated cousins the Bloodletters and their more tolerated but drippy cousins the Plaguebearers, a lithe unit of Daemonettes of Slaanesh join the fray. I have a lot of fondness for Slaanesh, a Chaos god often miscatagorised as just the "Nookie God". Instead He/She is the God of desire, all desires, desire for power, for safety, for physical lust. The sex thing is more like the entry level that people encounter Slaanesh at, fancy orgies in private clubs, that kind of thing. His daemonic servants and warriors are no less deadly than any others, they'll just take their time killing you... and enjoy it.

I made the conscious effort to avoid the madder hair that is available in the Daemonette kit, so the champion is marked out only by a slightly more badass mohawk and massive claws. The kit is hella fiddly to put together but well worth it for the delicacy that the models have as a result. 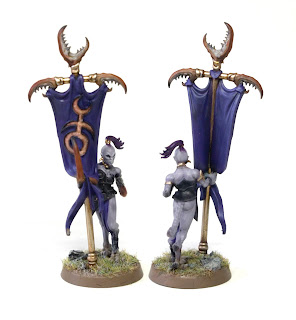 I especially love how the fabric of the banner is tented over the claws of the standard bearer. Normally I wouldn't go for all metal banner poles, weight is an issue for most things. For daemons though? I'm pretty sure they don't care about such considerations. I wasn't sure about the flesh colour for the mark of Slaanesh but it turned out really nicely and had the right disturbing tone. 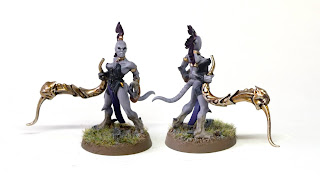 I also took the opportunity to indulge in some excessive gold. The Word Bearers are an austere lot and so excessive ornamentation doesn't suit them. For Daemonettes though? That's their bag baby! My gold method hasn't changed much since I learned it way back in an elderly 'Eavy Metal masterclass article. A basecoat of Army Painter Greedy Gold is shaded with Agrax Earthshade, then Druchii Violet is run into the deep recesses. This gives a real richness to the shadows. I then rebase the metal with Greedy Gold and start adding Silver to the mix for highlighting. Final highlights are almost pure silver.

As for the rest of the model, the majority colour - as with every daemon - is the skin. I did a lot of colour agonising with these. In the end I went with a mix of Daemonette Hide and Rakarth Flesh highlighted with increasing amounts of Rakarth Flesh and Pallid Wych Flesh. The leather I wanted as black, tooled leather. So I mixed German Camo Black-Brown and Black as a basecoat and then added bone for highlights. 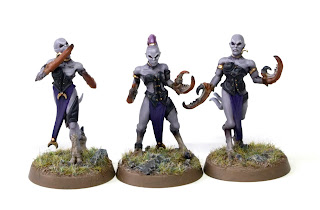 The claws I agonised about. I could not figure what colour to do them. Then, while googling crab claws I hit upon hermit crab. A lovely orange fading to black tips. I painted them Rakarth Flesh to mix with the rest of the model and then did a feathered wash of Fuegan Orange over them. Finally I applied a couple of thin layers of black to the ends feathering them out until they blended with the orange. Really happy with how they turned out in the end. Makes me want more daemons. Maybe work up to a small pure daemon army some day.