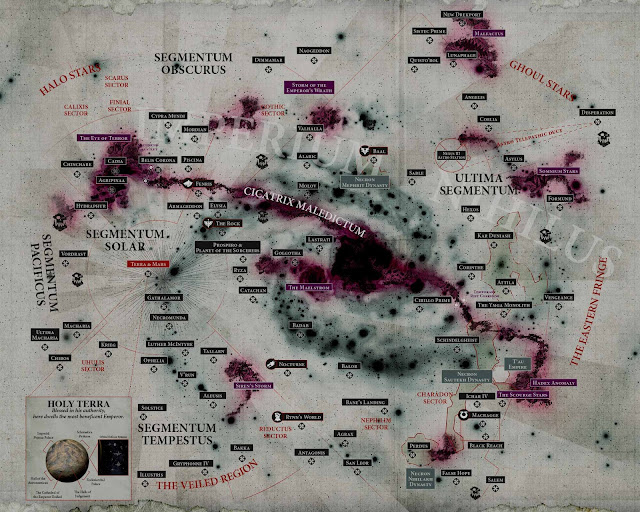 One Peter Atkinson recently left a comment regarding a throwaway line in my recent interview with 40K newbie Drew. Quoth he:

Could I please request a long tangent about how the sprawling, contradictory nature of 40K is both its biggest weakness but also one of its great strengths, maybe as a standalone article?

Ask and you shall receive, Mr Atkinson.

After thirty-some years of development from many different authors, the 41st Millennium is almost as rich and overwhelming as the reality we all came to escape. This makes it an intimidating setting for those trying to get a grip on it.

Even huge and well-known settings like Middle Earth, Star Trek and Star Wars are arguably simpler and, undeniably, less bonkers. Ask almost any question about those settings and there's usually a canonical answer, even if it's some half-formed nonsense about reversing the polarity on the surprisingly multi-purpose deflector dish.

Ask the same question of 40K and you could get three different canonical answers, or none at all. How do lowly Imperial citizens eat so much corpse starch without getting prion disease? No idea. Why don’t most Space Marines use camo? Actually they do. And they don’t.

(If you’re thinking “wait what?” about the Astartes camo thing, the long answer is that they don’t because they’re shock troops, and the very sight of them is meant to intimidate. But also they do use camo according to earlier lore; we’re just seeing them in parade colours so they show up on the table. I don’t think that was ever explicitly retconned, but feel free to tell me I'm wrong in the comments. Oh and the new sniper dudes in the Phobos armour wear camo cloaks but still paint their armour in bright colours for the worst of both worlds.)

Surely for a product aimed at obsessive nerds, contradictions like this are a bad idea? And yet it’s one of the things that makes 40K a setting I actually want to engage with.

One of the main reasons for this is that it feels much truer to life. Historically, different political figures and cultures have had their own versions about what is true and argue about it ad nauseam. For a setting as vast as the galaxy itself, it would be strange indeed if this had not remained the case. This also ties into the fragmented nature of history itself; our view of the past is imperfect, and the 40K mythos is so vast and sprawling that these contradictions start to feel like the sort of mutually exclusive arguments put forth by the ancient historians of antiquity, leaving us in the present to try and figure out who, if anyone, was actually telling the truth - and who they got that “truth” from.

These inconsistencies also offer a sense of mystery. Not having a single definitive answer to something makes it feel more like myth than if we had a single monolithic set of facts. The reason religious scholars have spent millennia shouting at each other is because mythology is almost always ambiguous, or contradictory, or obviously bananas. With 40K being a science-fantasy setting full of religious fervour and paranoia, it’d be a bit weird if everything was nailed down.

At this point I should concede that for people coming to 40K for some light entertainment, all this wurbling about mythology isn’t exactly what they signed up for. Light entertainment is all about providing something clearer and therefore more comforting than reality. Art, conversely, often seeks to challenge us to think about difficult, ambiguous stuff. I’m not casting aspersions; both of those objectives are Good Things. The point is that like many IPs, 40K’s mythos sits somewhere between those two poles. It has lots of horrifying themes about the fundamental impracticality of controlling a galaxy-spanning empire, and of the regressive power of dogma, but also it’s very much pew pew pew lasers, check out my skull-covered chainsaw, boom. Perhaps that’s a good thing; it stops us from taking it too seriously. Or at least, it stops most of us taking it too seriously.

It should also be remembered that there are two types of ambiguity: deliberate and accidental. Games Workshop does both. Sometimes I suspect they say it to jokingly explain the accidents, and frankly that’s fine too. The accidents are inevitable given the length of time 40K’s been a thing, and the sheer volume of content the company have churned out in that time. I doubt there's any one person who knows all the 40K lore, even at GW HQ. There’s no point getting worked up about that; one might as well argue with the moon for waxing gibbous.

To sum up my take on 40K’s contradictory nature: those contradictions are immersive to me because our own real historical record is riddled with the same issues, and it offers room for personal interpretation. And the accidental contradictions? I’m not overly bothered. Where two bits of official canon contradict each other, I feel GW have given us creative licence to personally choose which one to disregard.

Now onwards to the sprawling thing. Ironically my answer to this is much shorter.

First, the bad. For someone coming at this setting for the first time, us established fans will often struggle to summarise the setting; we get so caught up in its chronological, physical and canonical vastness that we can’t articulate an elevator pitch. So many details feel vital.

Indeed, even if we do manage to give a solid elevator pitch, the new hobbyist soon finds the rabbit hole is not a rabbit hole at all, but a fractal warren crafted by Francis Bacon and all his screaming popes. This is, to put it mildly, intimidating. They saw the big super-soldiers getting sliced up by aliens and thought: this looks fun. A few late night wiki-holes later and they’re getting a bad case of agoraphobia, and a feeling that they’d better stay creatively constrained for fear of being told they’re doing it wrong.

This is a shame, because the advantage of the ludicrous immensity is the freedom to make stuff up. There’s room in the 40K galaxy for whole empires to be awaiting discovery, and for me this is the best bit. The freedom to make stuff up is the keystone of my hobby. If a new hobbyist wants to do this but isn’t sure how, it seems to me that the solution is to encourage and collaborate with them; let them use you as a sounding board. Just be wary of being so prescriptive that they don't find their own way.

Of course it’s easy to say that, but harder to strike that balance in reality. If they’ve written their successor chapter as the gentle stewards of a liberal democracy, should you suggest that’s too much of a stretch for the setting? I’d say so, just like if someone asked if I’d like my orks to go up against their My Little Pony themed primaris marines, I’d turn them down harder than the members of TLC being presented with an ill-kempt scrub. Sure, it’s just that person’s interpretation, but the subjective interpretation defence only goes so far; just like when adapting a book into a film, you have to be at least somewhat receptive to the spirit of the thing you’re adapting. It’d be nice to be able to say “everything is subjective” or “nothing is subjective,” and life would indeed be easier if either of those things were true, it just ain’t so. Of course if both players want to brony it up (ugh) then that’s their business I guess. As with finding sexual partners, the thing is to find people with compatible preferences. I've seen armies that are deliberately pure, un-immersive comedy or are copying from another IP wholesale, and while people are absolutely entitled to make such projects - it's their hobby - they may find the majority of hobbyists are unenthused about playing opposite their Vault-Tec space marines or whatever. TLDR: I'm suggesting that established hobbyists shouldn't be too anal, and new hobbyists should seek to understand the spirit of the setting before going so far off-piste that they break their opponent's immersion.

So how to introduce someone to the grimdark future without overwhelming them? I know it sounds obvious, but I actually think the current (9th edition) 40K core book does a great job of introducing people to the tone and broad brushstrokes of the setting. Perhaps rather than telling people to watch one’s favourite Youtube video or read such-and-such a wiki, one should initially refer them to the book literally written to introduce people to the mythos. All that artwork and farcical strife will seep into them until it starts making the same weird, satirical sense to them that it does to us.