Throw horns Chaos fans! It's time for the second best* battlefield band in the 41st millenium. They come, heralded by the screaming of infernal chords, the Noise Marines of Slaanesh! 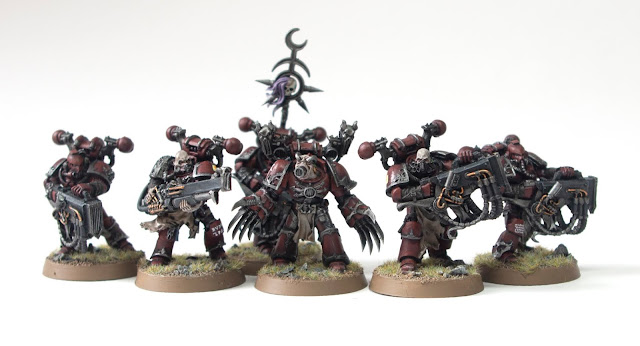 Yep! I wanted some "god squads" among my pantheistic Word Bearers. More about that later. For now, lets talk about the models. These are the Forgeworld Kakaphoni from the Heresy line. They've been a bit modified with chaos backpacks and the occasional shoulder pad but essentially "as sold". I just love the look of their sonic blasters much more than the old metal upgrade set. That having been said... you'll notice a metal blastmaster (unnacountably absent from the Forgeworld set) among the weapons. Mercifully it fits very nicely on to the new marines and makes a lovely companion to the sonic blaster design. I knew I wanted to use the disturbing doom siren head and backpack on the champion (makes up a nice Slaaneshi six see) and was perusing the wargear options and saw that they could have lightning claws. "Oh hello" said I and that was job done! I like the notion that he is blind and fights purely on echo location so you can't even hide from this nutter in the dark. Lacking spare arms to hold an icon, I jury rigged a daemonette standard top into a backpack-mounted icon. Quite happy with how they all turned out. 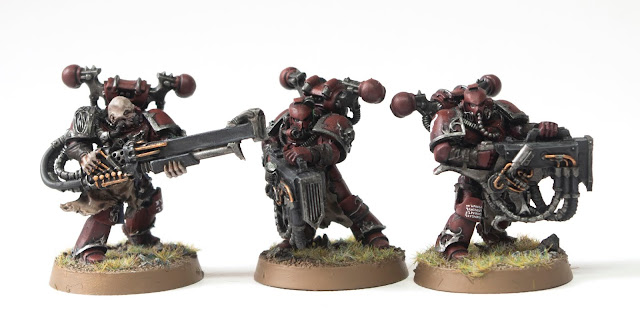 But now lets learn a little more about the oddness of a Noise Marine squad in the Word Bearers and how my head canon for them works, enter stage left Orcus Kairon:

"Empty night that noise, urgh, they're practising again aren't they. Who? Oh, yes, you haven't met them yet, Sor Gorlem's Beloved of Slaanesh. Of all the 'innovations' that snake Erebus came up with the Lodge exchange program was the worst. Oh sure, we illuminated our brothers, but they also taught us. Some of those embedded with the Emperor's Children returned with some of their prototype Kakaphoni weaponry. This then became popular with those living under The Rule of Slaanesh and thus we have the ear-splitting reality we have now. Hmm? Oh, yes, The Rules. As you know, most of us are pantheists. We give worship and praise to all the aspects of the Primordial Annihilator in equal measure according to our needs. For some, however, this does not adequately salve their religeous needs. Some of our Bretheren prefer to walk a stricter, narrower path, achieving a purity of worship in one of the aspects. We refer to it as Living By The Rule. A reference to ancient monastic practices on Old Earth. You'll find pockets of devotees of all of the dark gods, living by their various Rules spread throughout the Graven Star. I consider it to be either a little self indulgent or even destructive, but who am I to question the piety of a brother? If only they could be pious a little quieter, or in tune..." 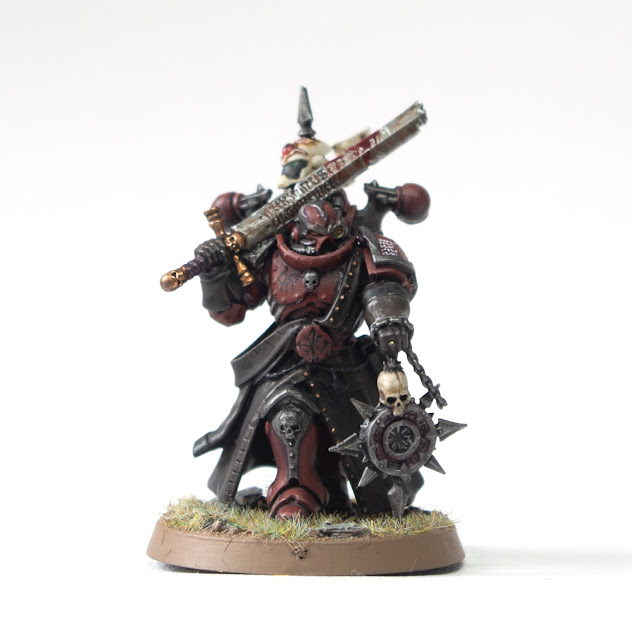 A Master of Executions! I'm on record with the Beard Bunker as thinking the current Master of Executions model as being... a bit derpy at best. I'm sure it works for some armies but it just was not working for Word Bearers in my head. Then the Indomitus box was released and with it the Judicar. Now I don't really like him as a Space Marine, but as a Chaos Space Marine... oh hello. Obviously some changes were needed. I wasn't a fan of the massive hourglass (why?) so replaced that with a nice chaos icon. The head needed to go and be replaced with a chaos marine helmet. Really helps the transformation. Finally a chaos backpack and some strategic shaving down of details (including roughing up the blade, more on that later) finished him off. 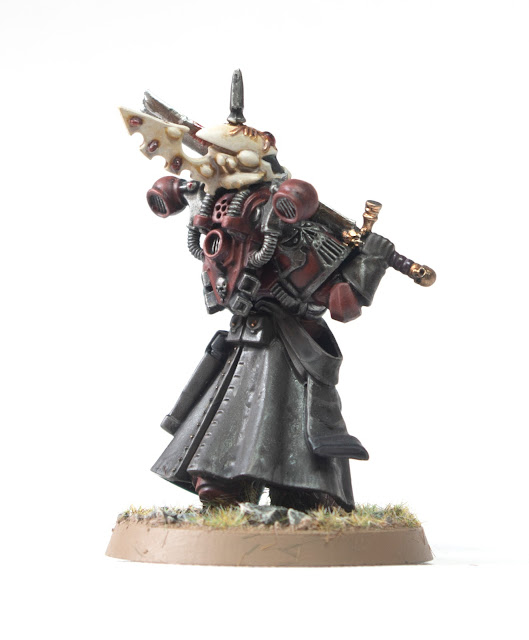 Well, almost finished. One more detail really finished the model nicely. My friend Harvey - who plays Ulthwé - wanted to assist in the trolling of another friend Drew (see her Eldar here) and sent me a spare farseer head to hollow out and slap on a trophy spike. So we kept it quiet until I was done painting him and then let her know that I had clearly run in to some from Craftworld Iybraesil before [eeeeeevil chuckle]. She was appropriately scandalised. But enough of these real world considerations, let's meet him and turn once more to Orcus Kairon: 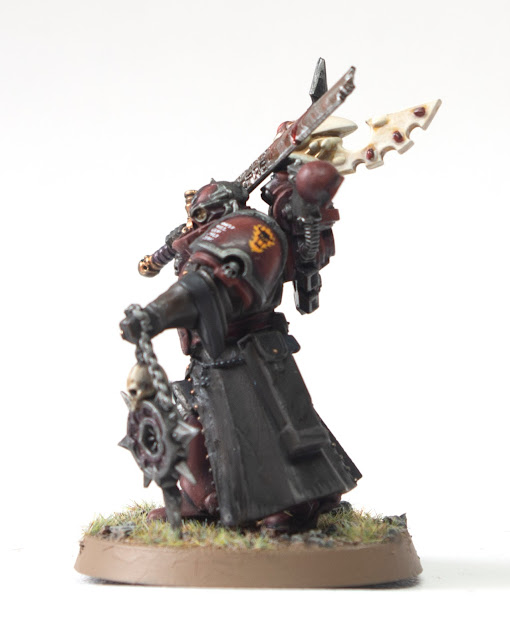 "Ah, there, see that giant of a man striding through the camp? Never, never get on his bad side. That is Arthul Layak, right hand of Lord Khoura and Instrument of His Will. Essentially he acts as Lord Khoura's champion and bodyguard. Oh, no, Lord Khoura is more than capable of taking care of himself but why take the risk? Under the silent gaze of that monster he is safer than any in the Chapter. Indeed, Layak might be a fly in the ointment of my plans... I cannot gauge his state of mind. He hasn't uttered a word for six centuries. A vow of silence in penance for some long forgotten sin. All he does is train with that massive blade of his. Hmm? Oh it's actually a loyalist weapon, captured during the campaign in the 500 Worlds. He seems to delight in profaning one of their relic weapons by using it to slaughter Imperials in the name of chaos. The gods alone know how I could take him if I needed to. Probably simplest to boil his brain in his sleep. Ah hells, now you've got that 'I know too much' look again, here, stare at the glyph, look at it shine..."

So there we have it, a Master of Executions that fits with my army and two friends trolled, one with his backstory (stolen Ultramarines blade) and one with modelling. Job done. Happily as the Primaris are a smidge bigger than the chaos and he's on a 40mm base he does actually look bigger than the rest so fits the monsterous combatant vibe. That's all for today folks, more god squads coming down the pike so look forward to them! Until then, lovely people,

*Clearly the best band in the 41st millenium are the Goff Rokkers.