In the Garage of the Mountain Mek


Many years ago, as a spotty teenage gamer, I felt blessed to be able to play games on my parents’ ping pong table in the garage. Ping pong was fun, but what was even more fun was fighting my friend Ali’s Orks for dominance over a battlefield of empty food tins, stacks of CDs, and rubbish bunkers made out of the polystyrene packing in which Citadel Miniatures used to come. I didn’t even paint the polystyrene; I just stuck cocktail sticks into it because I thought that sharp wooden sticks would look EXACTLY like the exposed bars in broken reinforced concrete. Particularly when they weren’t painted. Man, I could’ve entered that bunker into Golden Damon, which is like Golden Daemon, but for people who can’t be bothered to paint.*

I used to look in the pages of White Dwarf and practically dribble over the GW studio's scenery. The very concept of having a decent board, never mind stuff to go on it, was very much a pipe dream. I could’ve done something about it, of course, and actually applied myself to making some decent scenery, but like a lot of other gamers, I just focussed on my army instead.

It took the onset of adulthood for me to realise how much good scenery improves the experience of gaming. In a way, I’m almost glad I spent all those years gaming on lame scenery, because it means that I really, really, really, REALLY appreciate what I have now, which is a metric butt-ton of reasonably well-painted scenery. That, and the ability to buy scenery kits even the GW studio hadn’t dared to dream of in the 90s.

Of all the scenery we’ve got at the Beard Bunker, I think our Ork shanties are my favourite, not least of which because I have happy memories of building it.

Take five geeks, one stompa, several Manufactorum sets, plasticard, an epic bitz box, about a pint of poly cement, a long weekend full of inane conversation in a room that was in no way full of solvent fumes and emphatically required ventilation, and you have this: 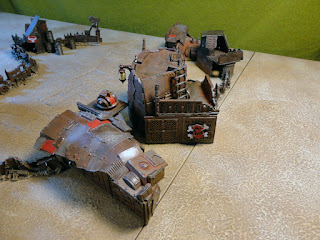 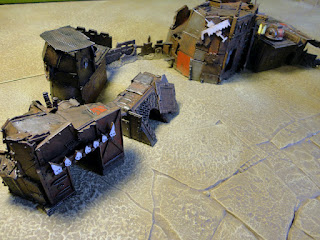 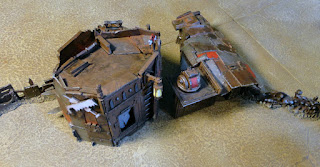 It has to be said: if you want to build Ork scenery, the Stompa kit is delicious.

We wanted all the buildings to be giant piles of rust, but didn’t want to spend three years painting them. As such, we tankbrushed the whole lot with Calthan Brown (but seriously, use an airbrush if you’ve got one). After that, a drybrush of Boltgun Metal was followed by a wash made from watered down Chaos Black (sorry, not familiar with the names of the current paint range yet – give me time!). We watered down paint because using pre-diluted wash over such a large area would’ve required us to purchase a prohibitive amount of Nuln Oil/Badab Black.

Once the wash was dry, we went over the edges with chainmail, and also gave some of the plates of metal an all-over chainmail drybrush to give the impression of the building materials being of varying age.

The finishing touches were to apply some of the Forgeworld weathering powders to intensify some of the rust, and to drybrush the same sandy colours around the bottom of the buildings to blend them into the board, said board having been painted with emulsion paints mixed to resemble Khemri Brown (basecoat), Desert Yellow (1st drybrush), and Bleached Bone (2nd drybrush).

Anyway, I hope my cack-handed photography hasn’t rendered this post useless. Should ye have any questions, thoughts, or feedback, leave a comment!