Last Christmas (I think) Jen enhanced my festiveness by buying me this dude:

Ohmygod, pretty. He’s one of the Empire duellists. It’s an absolutely beautiful sculpt. I mean seriously.

Now technically, you can’t use this guy as an Empire captain, because captains can’t take a brace of pistols, but I loved the idea of a young, smug prettyboy as the obvious counterfoil to my general, Erhard von Rüdiger – a grizzled Templar Grand Master. Moreover, most Empire captains, like Captain Stefan Rainer, who I painted for my Nordlanders, are big, barrel-chested bastards. This guy would be a refreshing change.

So, what to do with the rules? Other members of the Beard Bunker probably would’ve been cool with me just paying more points for the extra pistol, but I thought, screw it, why not go one step further? 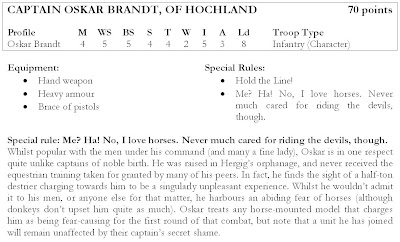 There was just one fly in the ointment. Apparently, Oskar wears tights:

Ok, it’s not that I’d feel self-conscious spending time lavishly painting a dude’s posterior, but seriously, why tights? No-one else in the Empire seems to wear them. I very nearly ending up letting the tights stay, because nothing says angry Skavenslayer like a permanent wedgie, but in the end, I had to take action. Drastic action.

Yep, I’ll be freehand painting the seams onto the back of what are now his britches. Whilst I’m here, I may as well take the opportunity – for those of you who find Green Stuff tricky to work with – to share a couple of hints.

The most important thing is to lubricate the sculpting tool, and your fingertips. Green Stuff will merrily stick to anything that isn’t the model, given half a chance. People swear by different lubricants (yes, I’m childish enough that I can’t write this paragraph without smirking). Some like water, but personally I find it’s not all that effective, and requires large quantities. Personally, I prefer dabbing a drop of olive/sunflower oil onto some kitchen towel, and wiping the tool (and my fingertips) on said oily patch. It’s rather less messy, and seems to work better than water, for me at least.

One of the tricky parts when adding putty to a model is that it can be a bit obvious, even after priming, where the putty stops and the model’s original surface starts (unless the sculpted area is meant to have a clearly defined boundary). The best advice I can give you is to use the flat of the sculpting tool’s main blade and spread out the edges until the putty is so thin as to be transparent – see the above pic – using a sort of buffing or polishing motion. So long as you stick with the flat of the blade, you should be able to maintain a smooth surface to the putty whilst keeping any visible joins to a minimum.

Finally, a quick note on Oskar’s rules: I worked out the (un-playtested) points value by paying for the pistol twice, and ignored the two points for heavy armour (to counterbalance the chance that he might have a quiet freakout if a pony comes a-charging). Does this seem reasonable? Over-priced? Under-priced? Do leave your thoughts in the comments.

Equally, if you would like a more in-depth post on working with green stuff, say so! It may convince me to write one in the future.