Back on the Hobby Horse

By Charlie October 04, 2012
Although I posted my last update on the Hochland army a month ago, I actually painted those models back in January. And then I thought: wait, when was the last time I actually painted something? Can’t’ve been that long; I write a hobby blog. People who write hobby blogs are doing hobby, like, all the time. Although, hmm, getting older subjectively speeds time right the fudge up. So, when was it? Three weeks ago? Something like that.

Turns out I haven’t done any painting since Nerd Thunder III, which was in... June. Dear sweet Vishnu on a Fisher Price pogo stick.

Now, okay, I was working hard on a novel, and I haven’t been entirely idle hobby-wise. Things have been built. A board was painted. But still... Jayyyyzuz. This needed to be rectified. Thus, over the last few days, I finally splurged paint all over Oskar. Now he looks like this: 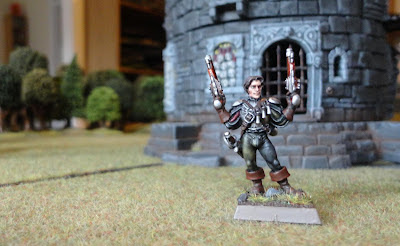 Oh god did I ever struggle with the colour scheme. Parts of him ended up getting re-painted three or four times. He started off looking like he was from Nuln, with red insets in both sleeves, but it wasn’t Hochlandy enough, so then I painted his trousers green, but he started looking like one of Santa’s elves, so I broke it up with multiple shades of green, but then it just looked like one of Santa’s elves had upped sticks and moved to Athel Loren. It’d all gone wrong.

In the end, this weird pseudo-quartered situation was the best thing I could come up with. Does it work? Feel free to say yay or nay in the comments beneath, but damn it all, the paint job does at least project the right vibe for young Captain Brandt: smug, practical... and a slight hint of grit. 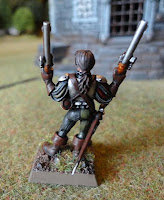 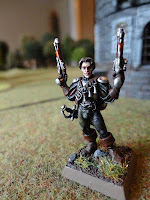 A great rule to follow when painting a character is to occasionally look at the model from a few feet away. Does it still work? Does the structure/shape remain clear? Often, doing this will reveal flaws in your composition, or the need for stronger highlights. Looking good only from six inches away means it’ll never look inspiring on the tabletop. I generally make a point of doing this with all my character paint jobs.

Did I do it with Oskar here? Even once? Pff, whoops. And does he still work from two to three feet?  Um... errr... probably should’ve practised what I preached there.

Anyway, I now have a (technically) legal army – three little core units and a hero to lead them. 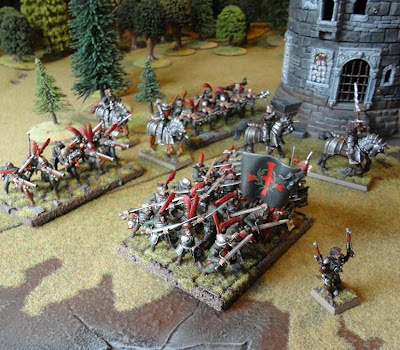 In no way can I rest on these puny laurels, though. Here’s where the whole army’s at: 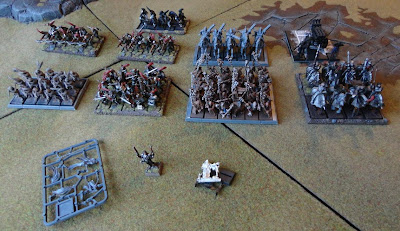 Eek. And that’s missing another twenty state troops I haven’t even bought yet. At least the vast bulk of it’s assembled, and some of it’s even basecoated. Glorious. The thing is, there are some big-ass pitfalls. See that plastic Dark Elf Sorceress on the bottom right? She’s going to provide the armature for a female Empire wizard. Up to about 50% of the surface will eventually be covered in green stuff, and I haven’t sculpted properly for a while. And then there’s the banners. I’ve no idea what I’m going to do for the knights’ banner, and of course the unit of 20 handgunners I have planned will need a big slab of freehand on their flappy flag of love too.

Will I get all this done in the next three months? Who can say. All I know is this: