By Charlie October 30, 2012
When Jeff announced the Beard Bunker’s Campaign back in January, we promised we'd keep you updated with our progress. Well, over the last few weeks I’ve begun to build some momentum. Now that I’ve put some finishing touches on ten archers, twelve flagellants, and a fifth member of the Silver Drakes’Inner Circle, I’m sitting pretty on an 800-point army. Behold: 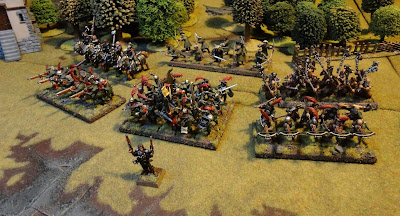 Ha! In your face, looming deadline. I can beat you.

It comes to my attention, however, that we've not heard anything from my fellow Beard Bunkerettes for some time. Emma? How’s your army looking?

EMMA: After a very enthusiastic start on my Tzeentchian Chaos Warrior army back in the Spring when two units of malicious-looking meaty warriors and ten gangrenous warhounds came into being, my new-found hobby proceeded to take a back seat for the entire summer. Charlie and Maisey are entirely to blame for this as they are the ones who waved the Mass Effect game series in my face and said 'this is awesome you have to play it.' Roll on hundreds of game hours over the last four months and Commander Shepard and I have finally rid the galaxy of those pesky robot squids (albeit by accidentally running the right way when it came to the final big decision of how to end the war). It took a little bit of self-discipline but now I'm totally back in the painting zone and have five ultra-bling Chaos Knights to show off as well. Next step... a character!

CHARLIE: Bum grapes, that’s, like, easily the same number of points as me. Probably more. And it's your first ever army. What's the point of having a noob around if you aren't going to make me look good by contrast?* Oh well, Maisey can’t be that far ahead of us.

They say a picture says a thousand words. If that's so, then the picture below is just Emma and I saying "I'm scared" five hundred times. That's almost three thousand points of Vampire Counts. I think Maisey might be a robot. A painting robot, with laser nipples and the power of time travel. He painted this army in the future, and sent it back in time to do battle with my hobby pride.

Man, I need to paint me more lil' plastic dudes.

*If I ever use the word 'noob' without irony, or imply that beginners are unwelcome in the Beard Bunker, I hope that each and every author of this blog will take it in turns to stab me with my own sculpting tool.