By Jeff November 14, 2012
Junk food! Filthy humour! Headache-inducing bouts of laughter! Geek Week is here, and we've got the pretty pictures to prove it. As I type this, the Beard Bunker's painting table looks like a cross between a sweatshop and the zombie apocalypse. I'll let Maisey explain why later on.

The experience is as enjoyable and as humiliating as I expected it to be. So far, Maisey's painted 25 skeletons, based 20 zombies, and painted another thirty. Jeff's produced a unit of sixteen deeply charming Thunderers. And what have I got to show for myself? A finished volley gun that was already half-done when the week started.

In my (limp) defence, I've also mostly painted five handgunners and done some sculpting on Amelia (more on that project later in the week), but for now, here's a picture of the army's Helblaster: 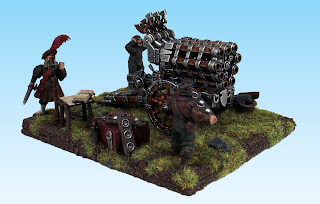 As with much of my stuff, I've tried to model the crew in such a way that you get a sense of their character. The chief gunner (the chap with the telescope) is an academic from Nuln more than a soldier of Hochland, and generally stands about fussing over ballistics equations rather than just eyeballing the target with an expert eye and kicking the boom lever. To his left is a simpleton crewman who hasn't worked out that it isn't worth covering your ears until the one competent member of the gun's crew has finished loading the damn thing.

As with most of my kustom artillery bases, they're made with a movement tray filled up with bases of varying sizes gap-filled with Polyfilla. The engineer's table was a fairly comedy conversion; I took one of the books-strapped-to-planks from the Flagellants kit and used a razor saw to slice the book right down to its cover, creating a piece of paper on some planks. Add some legs, you've got a table. The addition of an open book from the Battle Wizards box completed the thing, after which some time was spent gawping at Da Vinci's notebook for freehanding inspiration.

And now, here are Jeff's Thunderers, standing behind the shield fence he modelled a while ago. Take the mic, Mr Jeff!

Jeff: Greetings Beardlings, my lord, it has been some while since I posted anything on the Bunker! Thankfully, the Geek Week is upon us and the intention is to break the back of the army in one glorious week of painting glee masquerading as a holiday. Given that I would like to get some games in with these short bearded blokes at the end of the week I split the monster 3k list into a more manageable 1000 point chunk to prioritise. The Thunderers - Dafnir's Deadeyes - are the first fruits of that labour. 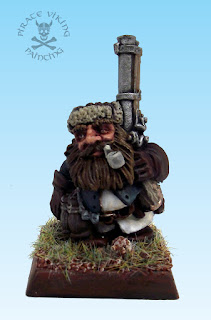 This little chap is one of my favourite Dwarfs ever, he is just wonderful, oozes character and so I'll use him to talk about the painting. The overall scheme for the army is a green-blue-grey and white that - hopefully -brings the sea to mind, these chaps coming from the great Dwarven sea port of Barak Varr after all. The blue-green-grey is Incubi Darkness highlighted with the addition of Russ Grey. Originally I had a dark storm-cloud grey as the alternate colour but decided that this was far to similar in tone to the primary. Instead I went insane and decided on White. Yep, I voluntarily chose one of the hardest colours to paint! It did also create a wonderful conversation between Charlie and I where I asked "should it be a greyer white or a boner white?" There was a long beat before Charlie asked whether "boner" was really the word I wanted... In the end a Bonier white was the consensus. This is achieved by a clean coat of Ceramite White with a thin skim of Seraphim Sepia and a re-highlight with the white. I'll talk about other aspects of painting Dwarfs later in the week as otherwise all of my posts will be the same: "so yup. Painted more Dwarfs..." and with that I shall hand off to Maisey:

Maisey: BRRAAAAAAIIINNNSSS... Well, not brains actually but BOOOONNNNEESS (Clackity Clack Clack). The Bonier chaps below are the third unit of skeleton warriors out of four that will form the backboner [really Maisey, really? -Charlie] of the army. They have been split into two units of spears and two of hand weapons and shields, hopefully creating holding units so my killy units can get into the side of things and make a wonderful mess of things. In smaller games, the skeletons can do this on their own, using the HW&S guys to hold at the front (with their parry saves to keep a few more of them from being re-deaded) while the spears get into the side with the higher number of attacks to do the damage. 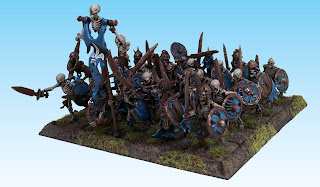 As with all of my skeleton-based units they have the fleur de lys as their banner icon but with a slight variance in the design. 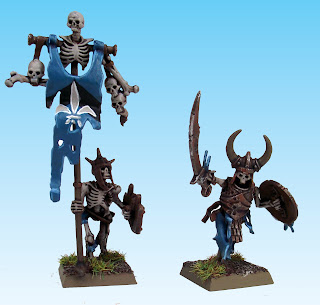 Right this moment I'm waiting for the wash to dry on the current batch of 30 zombies. The aim for the next couple of days to expand the zombies from a respectable horde of fifty into, what we agree is the correct number of zombies, which is to say, three hordes of 50. I'm rather close. Just a bit more basing and the second horde is complete, while the third horde is 2/5ths of the way done. In order to break up the George A Romero filmset that my corner of the table has become I'm going to chunk through the fourth and final unit of skeletons. I might treat myself to a character to reward myself later.

Right, back to the brains... BRAAAAIIIINNNNSSSS.

Charlie: Yeah, um, thanks Maisey. Next on BBC2, here's Shirley with the weather.