By Jeff November 18, 2012
Well folks, that is it, the Geek Week is over and time to inspect the spoils of the final days, first, I'll take a squint at my Dwarfs:

As mentioned last time, I was rewarding myself with a Bolt Thrower. I'm really chuffed with figuring out a new wood method: Steel Legion Drab with Rakarth Flesh woodgrain all bound together with Agrax Earthshade wash. I don't hold with this new idea of Dwarfs only using metal. Kinda daft.

Also in the vein of rewarding myself for a week of solid painting I thought I would add another rank of Slayers to the unit. These five are the pirate slayers to give them their nautical feel. Long Drong the pirate slayer captain will be the Giant Slayer of the unit and deserves a slightly closer look. 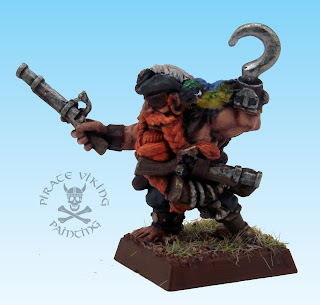 Gotta love that Macaw on the shoulder, all the colours just balance the beard so, so nicely. Check real world references when painting animals as you will always, always forget important details. 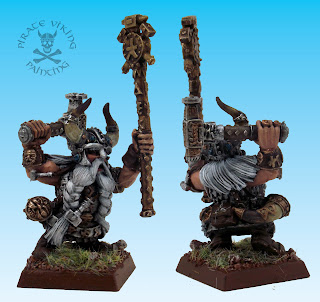 And finally, the first hero for the Dwarfs! Runesmith Dwalin Gravenrune is finished. He was surprisingly swift to complete being mostly made of shiny metals. I went with adding plenty of gold to him rather than the brass that the more common Dwarfs are festooned with. This was for two reasons; the Runesmith is supposed to be rich and more importantly he is stuck in the Longbeards. A long bearded, armoured, grey haired bloke among 20-odd other long bearded, armoured, grey haired blokes needs something to help him stand out.

So what has Geek Week done for me? Well, the Dwarfs are looking a hell of a lot of more like an army than it did at the start. Everything in that picture above was bare metal at the start of this thing. It has taught me that a week of solid, focussed painting with a bunch of mates around to keep you motivated and entertained can achieve some quite astonishing results. Speaking of astonishing results...


Charlie: OK, so I only have eleven finished state troops to my name, but I'm really happy to have finished sculpting Amelia. The results make me reasonably happy, even if there are scrappy patches and imperfect surfaces. Whilst I have a lot left to learn about sculpting, there are a few useful bits of advice I'll share in a later post that'll show the step-by-step process of the sculpt. Now I just have to decide how to paint her...

Jeff: Now unfortunately poor old Emma has had to work this week but because the camera was here we decided to do a Previously on Geek Week for her too. Take it away, Emma.


Emma: CHARGE! Thanks to the wonderful Jeff I now have some close ups of my Chaos Warriors so far! Unfortunately, high quality photography serves to highlight the flaws in my painting (as opposed to the other guys where it reveals lots of insanely minute clever details) but meh, I'm still pretty happy with this first stab at an army.


I had lots of fun painting the grumpy expressions on the bareheaded warriors.


So now they are alllll finished. Just about. *hides the handful of unbased warriors in the middle of the unit* Thanks be to Maisey and Charlie for your tips and painting advisory service :)

Speaking of Maisey... Maisey: I've got nuffink mate. Xbox ate me. Maisey has been bashing away at a few things but has churned most of his progress early on. 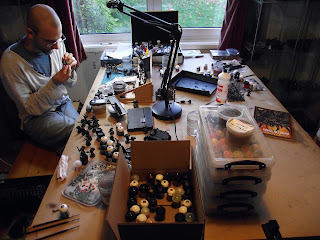 Jeff: And this is what a table looks like after a week of insane painting. I've actually tidied up (bottom right) so it was even more extreme before this shot was taken. Lunacy. Anyway, we are all returning to our real lives now - ironically for me that means more painting - so normal service will be resumed!