Jeff’s last post gave me multiple hobbygasms. The Inquisition is cool, the Cetus sub-sector is cool, the concept of skirmish games is cool. The whole state of play is pretty boss sausage. That being the case, it seemed appropriate to introduce one of the warbands that will be taking part: 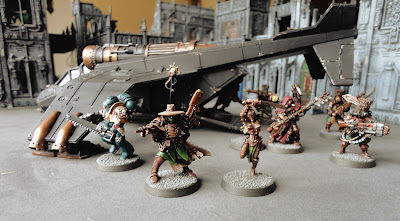 I painted Inquisitor Drake some time ago and haven’t had many chances to use him, but with the advent of our Inq28 campaign, that’s set to change. That being the case, it seems appropriate to flesh him out and give him more than just a name.

Inquisitor Aidan Drake was one of the acolytes of the famously intrepid (i.e. reckless) Inquisitor Aerdon of the Ordo Hereticus. Drake had two qualities Aerdon lacked: patience and subtlety, attributes that made Drake an excellent deep cover agent. Over time, Drake was given more responsibility, until he came to co-ordinate Aerdon’s intelligence network.

For all his achievements, though, Drake felt that he was forever in the shadow of Aerdon’s other acolyte, Benedikt Hirscht. Like Aerdon, Hirscht was more of a warrior than a detective. Once Drake had gathered all the information, pinpointed a target’s location and provided Aerdon with the enemy’s weak points, Hirscht would be dispatched to make the kill and enjoy the recognition.

Unsurprisingly to all who knew him, Aerdon died in the field. His final act as an Imperial Inquisitor was to give Hirscht a field promotion so that he might have the authority to bring Aerdon’s killers to justice. Hirscht, who had worked under Aerdon for only a fraction of the time Drake had done. Hirscht, whose idea of investigation involved a power axe. Drake understood why Aerdon had made such a choice – they needed a war leader, not a spy – but the implicit rejection bit deep. It was years before Drake finally received his Inquisitorial Rosette, but as far as Hirscht ever knew, theirs remained an ever-friendly rivalry; Drake knew better than to sour any professional relationships with his pride, and concealed his feelings behind a famously dry sense of humour.

Drake has since grown older and wiser, although he’s still prone to holding a grudge. After a brief phase of trying to operate more like Hirscht, he’s since learnt that his greatest strengths are, and always have been, infiltration and unobtrusive investigation. Most Imperial authorities never even know when he’s visited them. That said, there are times when Drake and his team have to ‘go loud,’ and when that happens, he feels it’s best to do it like you mean it. That’s where his warband come in.

Sera Jentiva was once a death cultist who tried to assassinate Inquisitor Aerdon. Always one keen to turn enemies into useable assets, Aerdon hit her until she stopped trying to stab him, locked her up, and spent a good few months giving her an existential crisis by way of pointing out the idiocy of her fundamentalist beliefs, after which she helped him track down the cult that dispatched her in the first place.

An expert at climbing or sneaking into places she isn’t supposed to be, she was soon assigned to Drake’s infiltration team, and has continued to follow him since Aerdon’s death. She’s somewhat more hot-headed than Drake (most people are), although he finds it useful having someone around to tell him when he’s being over-cautious.

He has since been invited back to the now renamed Templars Errant by a Chapter Master who has seen the error of his ways, but Elias has no interest in returning to his brothers any more, fearing that his return might re-open old wounds the chapter needs to forget.

Instead, he continues to work with Inquisitor Drake, and slowly, in the presence of such a cerebral mentor, he is becoming less the indoctrinated killing machine, and more a man of reason and thought. Quite how dangerous it might be for an Astartes to contemplate his own beliefs is, of course, not without worrying historical precedent, and Drake keeps a close eye on the grizzled sergeant, knowing that the inflexible mind of an indoctrinated soldier is prone to growing pains in the first few steps down the path of greater knowledge.

Inquisitor Drake uses Stohlbard Dragoons as marines on board the Trojan, his Cobra-class destroyer. If and when Drake needs to go into a situation guns blazing, the heavily armed and armoured Dragoons make an ideal bodyguard.

The Trojan carries an Atlas-class drop ship, an unusual vessel only just small enough to fit inside the destroyer’s cramped launch bay. Atlases are, in effect, a flying landing pad with space for up to four Valkyrie-sized atmospheric flyers clamped to its roof. The Atlas, with its heat-shields and space-worthy engines, will relay Valkyries from orbit into a planet’s atmosphere, at which point the gunships can take off and fly Drake and his team down to the surface. Unsurprisingly, Drake’s black Valkyries have no markings or insignia on them whatsoever.

There you have it, folks. I hope that made for entertaining reading and/or inspiration for your own characters. If you have feedback or thoughts, I’d love to hear ’em!