Be thee a sporting gentleperson?


Jeff dropped some truth bombs in his last post. They concerned sporting conduct, and I’d like to elaborate on the theme, not least of which because he wasn’t the only one to have an uncomfortable moment of self-realisation during campaign week. 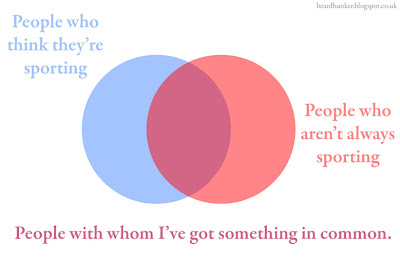 We wargamers all like to think of ourselves as sporting players. No-one wants to be remembered as a game-spoiling spoontard, be they competitive or non-competitive. But if I’m honest, sometimes my enthusiasm ebbs when everything’s going wrong, or I bitch about the unbalanced rules for that thing Jeremy Vetock wrote that one time, or (and this is a particularly embarrassing one) I get more lively when I’m winning the game.

I’ve spent years honing my painting and modelling skills. God knows how many conversations I’ve had about tactics, and army lists, and all that jazz. One would have thought that somewhere amidst all those years, I would’ve sat down and thought, really thought, about the skill of being a fun opponent. Well, now that I’ve done so, it turns out I’m not quite as stridently awesome as I thought I was.

Keen to fix this, I have assembled a bunch of guidelines. Hopefully they’ll prove helpful for others as well. I’m actually quite excited about this; if I stick at it, gaming is going to get even more delicious.

Also, sorry if some of these seem obvious or patronising. They’re all inspired by real-life failures I’ve either seen or actively participated in, so clearly all of these are fresh news to someone.

- Make sure you and your opponent know what kind of game you’re playing before you start. Are the army lists competitive or story-based? Will you be using the rules as written, or the rules as intended?

- The appropriate response to an abysmal dice roll is "nooooooooooo!"

- Laugh at your misfortunes. Chapter Master just blown his own hand off with an overheating plasma pistol? Laugh. Regiment failed its charge by an inch? Laugh. Battle cannon missed a barn door only two inches away? It’s actually pretty funny, and your opponent probably thinks so too. They just need your permission to laugh with you. If you can’t laugh, because the pain of gaming with little toy soldiers just cuts so deep, then be comically angry instead. Or comically something.

- Avoid being a starch-arse and be forgiving if your opponent forgot to do something in the right sub-phase or whatever.

- Commiserate with your opponent when something goes wrong for them. Unless they’re laughing, in which case, laugh along with them.

- Are the rules for one of your opponent’s units totally broken? Maybe, but don’t bitch about it to them – they didn’t write the rules. Much better to come up with a cunning way of dealing with said scary unit next time.

- Compliment your opponent when they do something you didn’t anticipate. Preferably in the form of smack talk. I.E. “You sneaky bastard,” or “clever girl.”

- Don’t give up as soon as you think you’ve lost; make a last stand, or start a fighting withdrawal. Better to be Leonidas in Hades than a wet fart in the night.

- To quote Jeff, "Allow your opponent to win without feeling bad for God's sake! I always thought I did this but on the retrospective evidence of my memory I did not. That is not cool."

- Conversely, enjoy your successes. If your opponent’s going to lose a game, they’d probably like to feel that they have at least succeeded in making you happy. Just be sure not to cross over into smug or gloaty territory.

- Friendly trash-talk and claims of “I’ll get you next time, Gadget!” are of course obligatory.

There’s probably a lot more things that could go in this list. What can y’all think of?