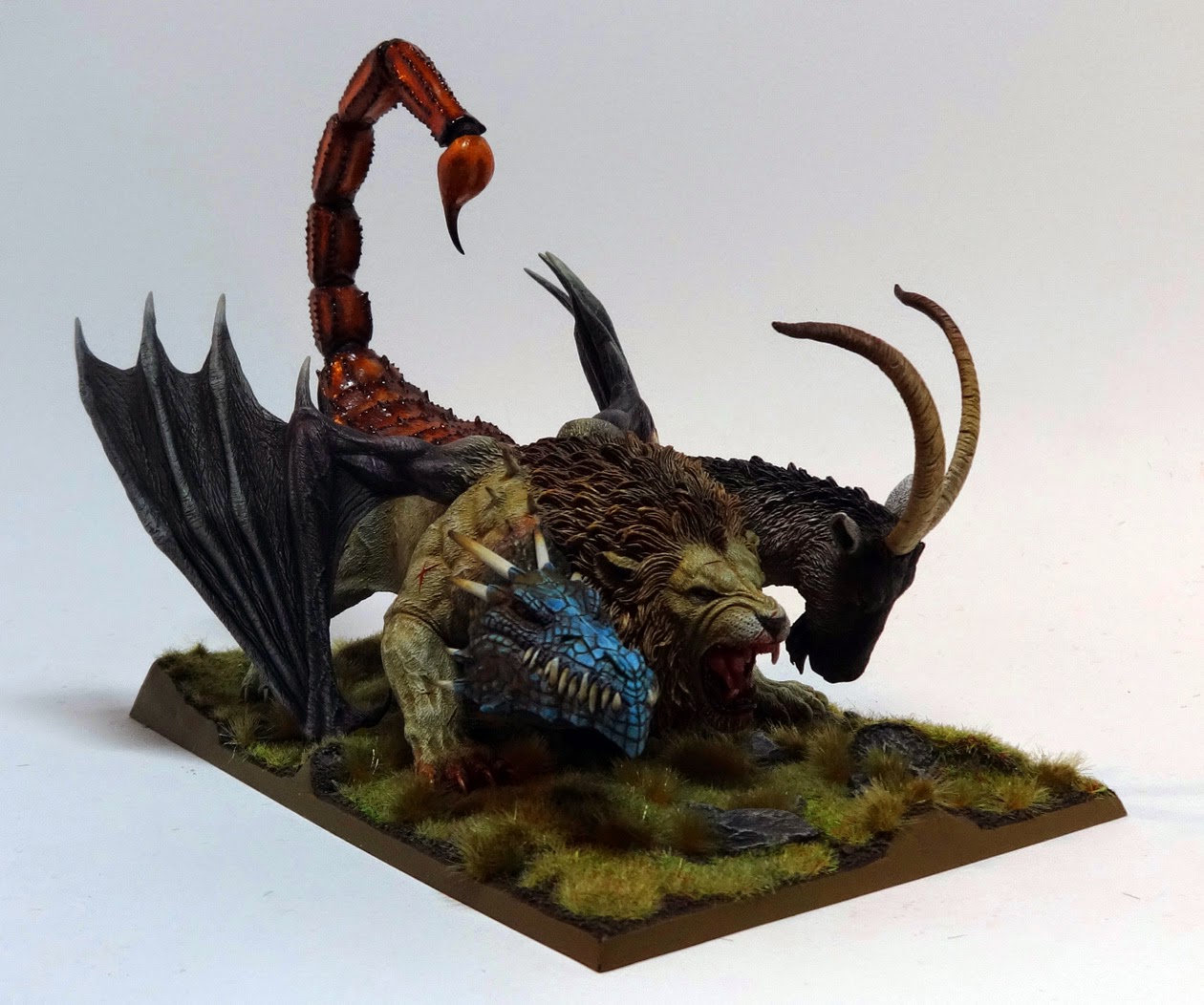 Hello and welcome to my first and last commission job. Approximately ages ago, my mate Nick decided he wanted the Banebeasts "Chimaera". He really, really wanted it. And then he asked if I’d be willing to paint it. For money.

Me: And you want me to paint it, like, nicely?
Nick: That’s kindof the point, yes.
Me: Judging by the photo on the website, it looks quite big.
Nick: Yep.
Me: It might take me a while.
Nick: Sure.
Me: A long while.
Nick: OK.
Me: Which means commissioning it might cost a fair bit.

I quoted Nick a big number that would have me working for over 70 hours at a low wage. I figured at this point Nick would give up and let me go back to having no money ever.

Nick: Can I pay in instalments?

Clearly I hadn’t appreciated quite how much Nick wanted this model. 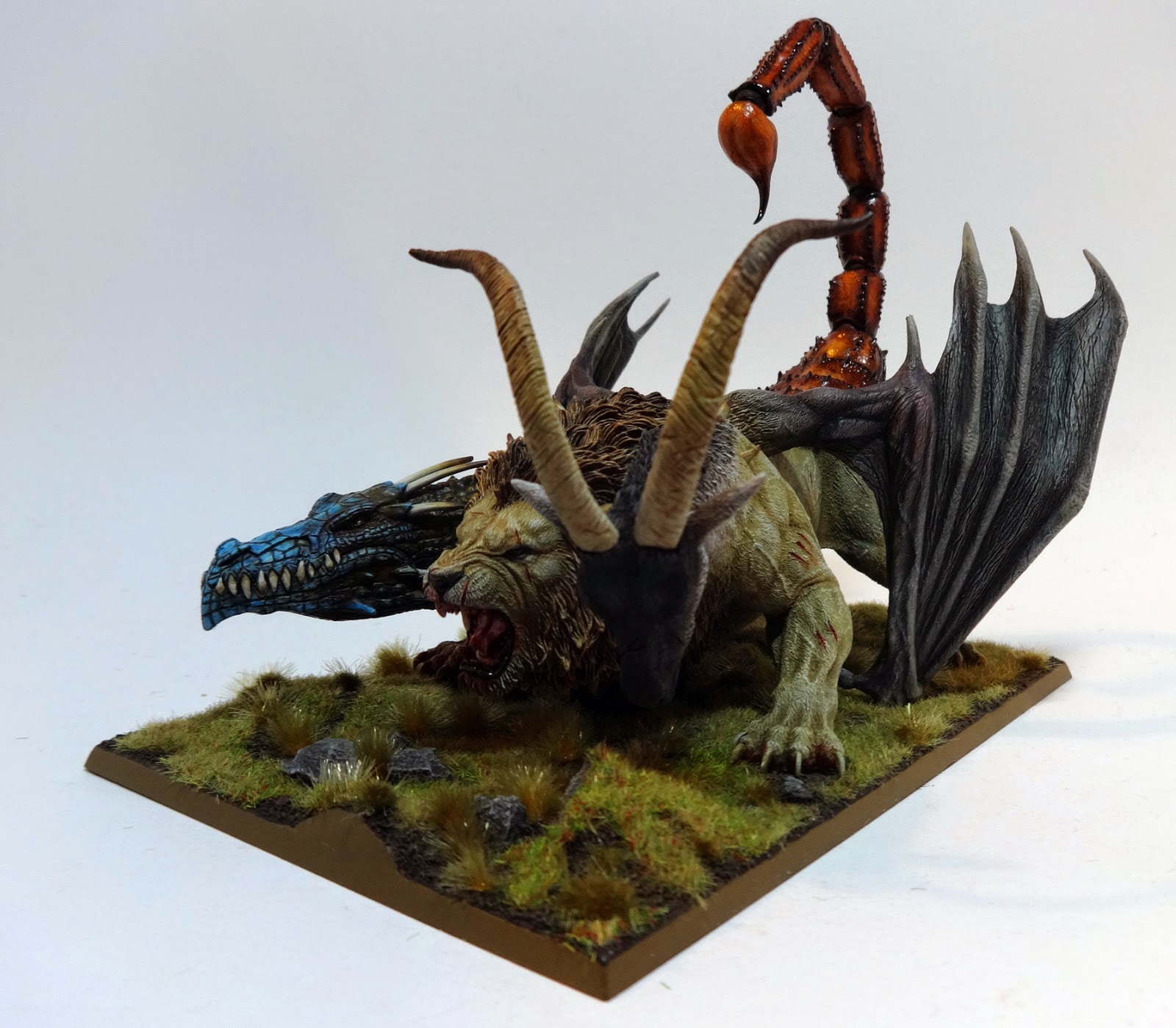 Also, I suspect Nick didn’t realise quite how long it’d take me to finish. Admittedly this is more because I’m a dreadful person to hire as a painter, since my brain was challenged to the absolute limit of endurance by this model. It’s more like painting five big and completely different models and then blending them all together. Several of these elements required me to make up techniques previously unknown to me. There was also a lot of research. 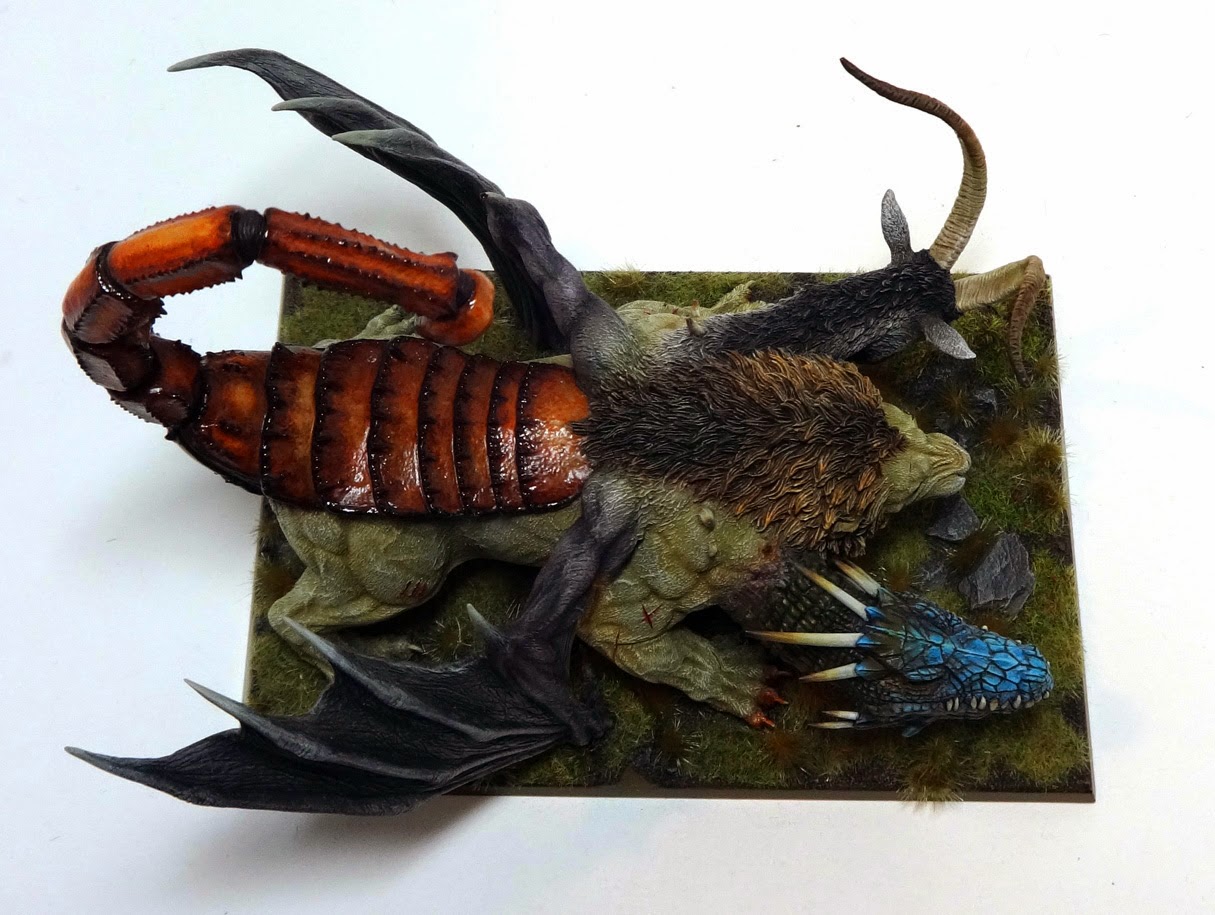 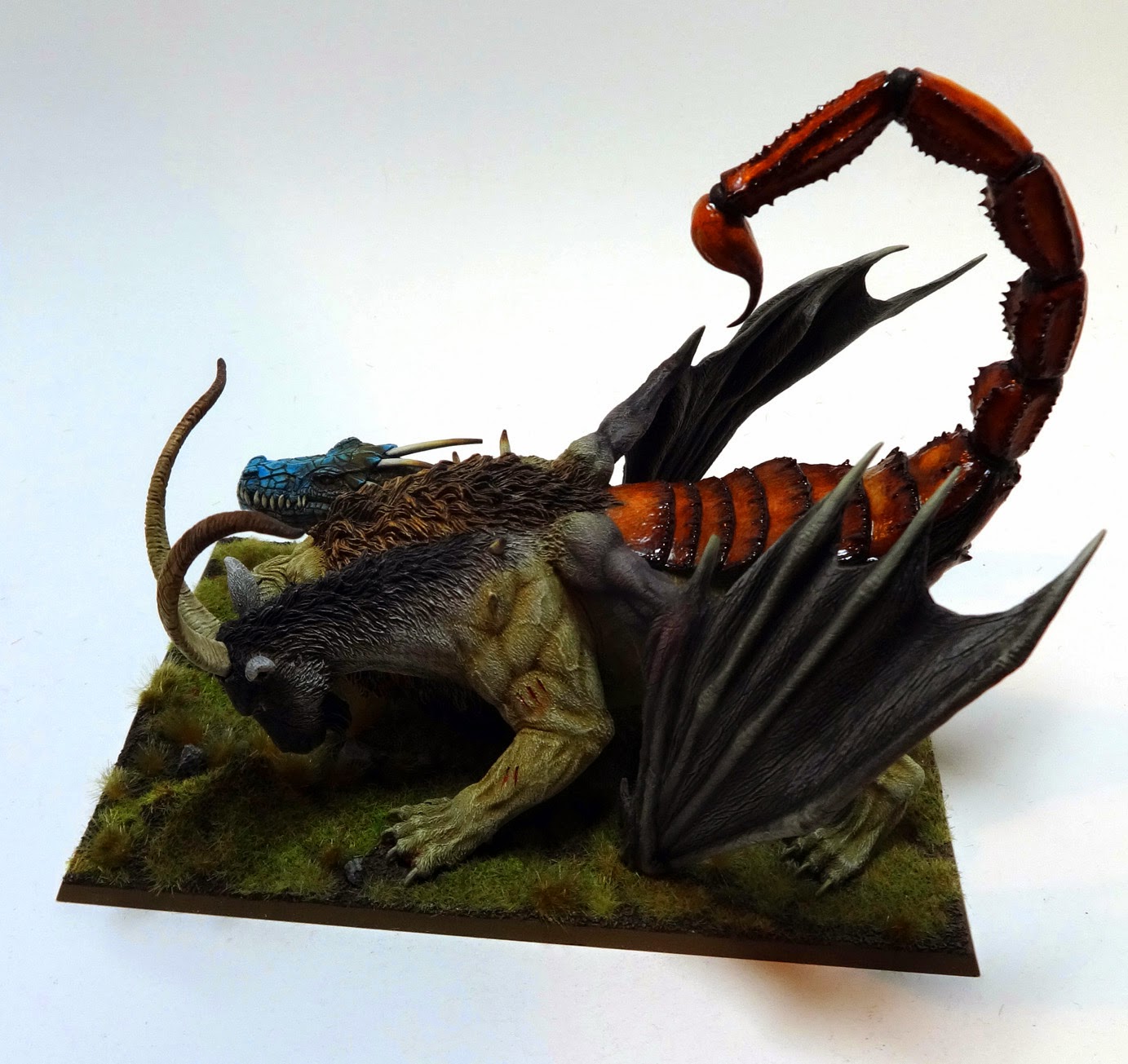 I have never, for instance, needed to blend two different types of varnish into each other to create a fade from satin to gloss (hallo, scorpion tail).

Other demanding things included the request that I paint the dragon head blue. Blue? BLUE? BLUE LIZARD HEAD? SCREW YOU, COMMISIONER MAN PERSON. I didn’t even know blue was a thing lizards could be.

Toot toot, Google image search to the rescue. Blue iguanas all up in this shizznit. 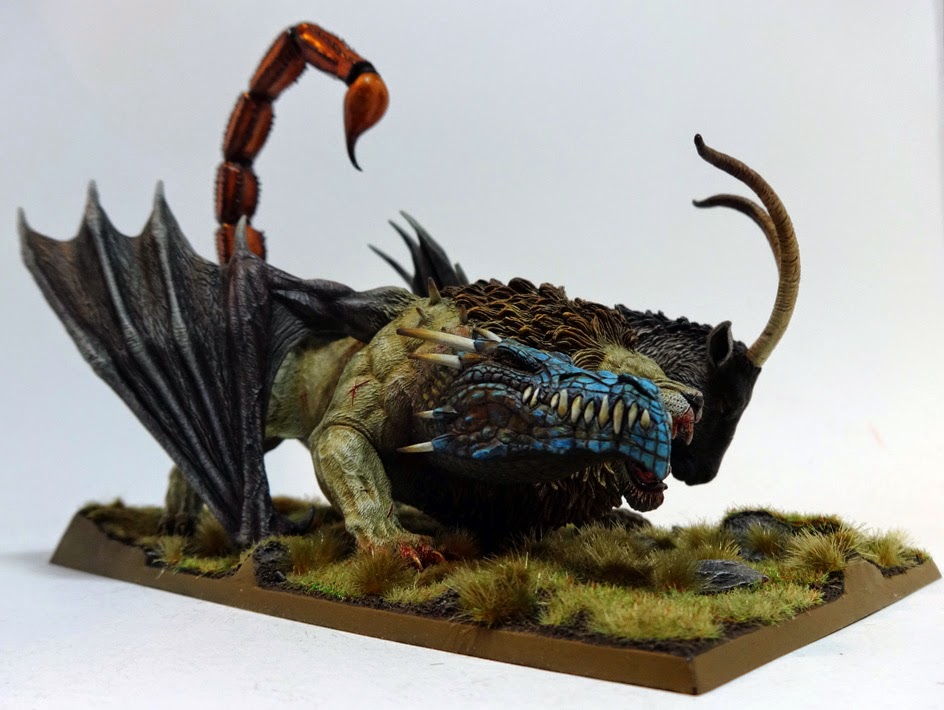 With the rest of the model, Nick gave me total freedom. Being a masochist, I decided to blend all the way from amber to jet black, rather than just going for ye classic big black scorpion o’ doom. I really am my own worst enemy.

The goat head was a much simpler affair; I tried to emulate the look of an ibex. Definitely the easiest part of the model. 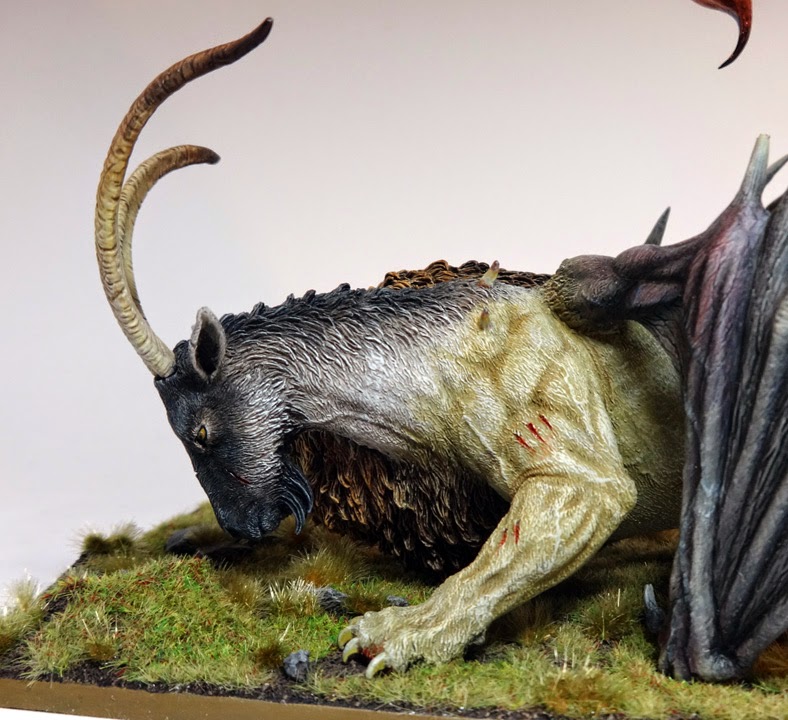 On the subject of the model itself, as much as it might take an age to paint, the sculpt itself is pretty boss sausage in almost every respect. Every respect except its danglies. If you sculpt a lion’s junk, I have to know how to paint a lion’s junk, which means I have to image search a lion’s junk, which means a) oh god the search history, and b) I now know that balls are balls, but the sausage looks nothing like that in real life. In fact, it’s more of a... actually you probably don’t need to know that. You aren’t painting a little resin lion’s little resin bits. 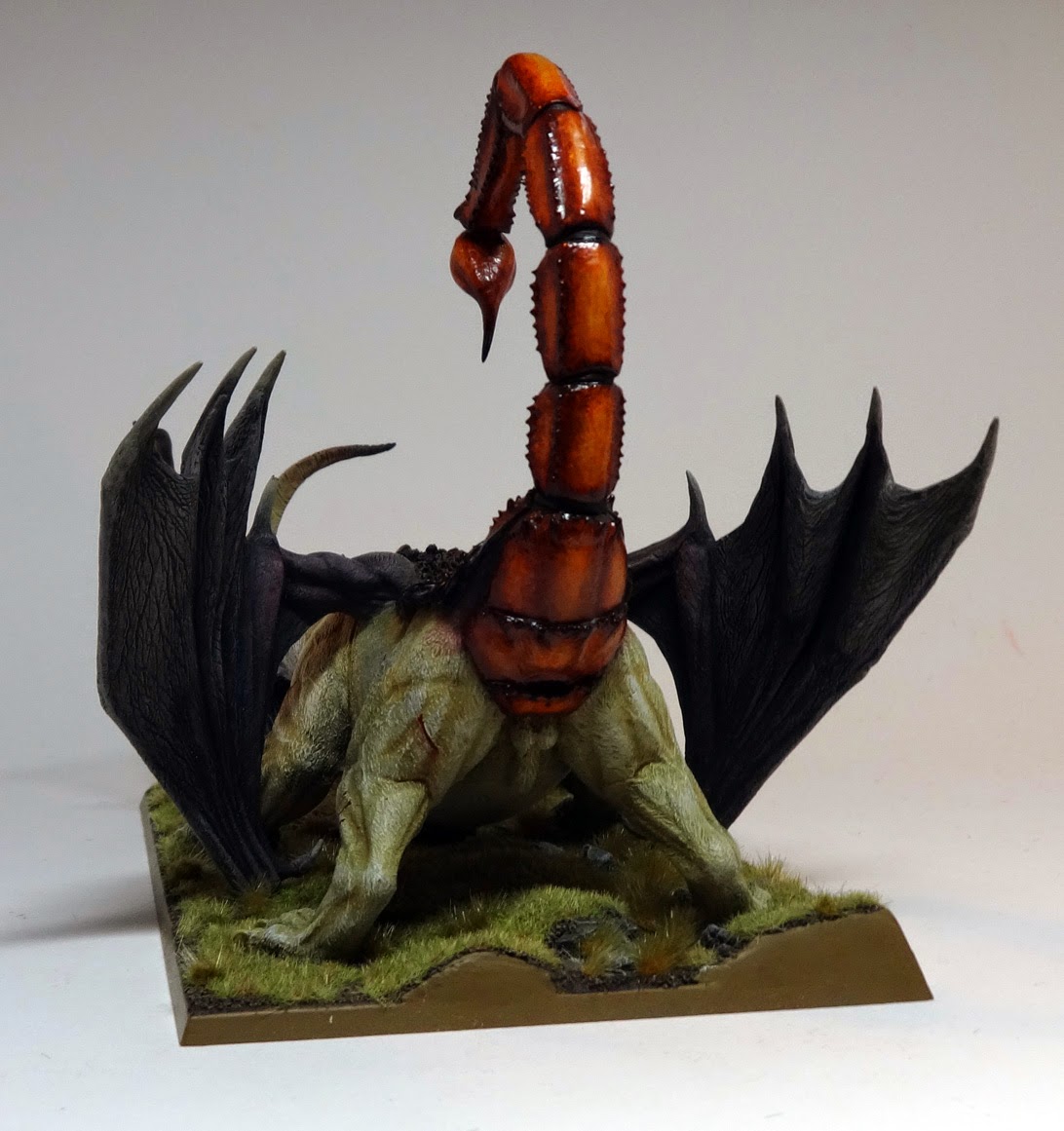 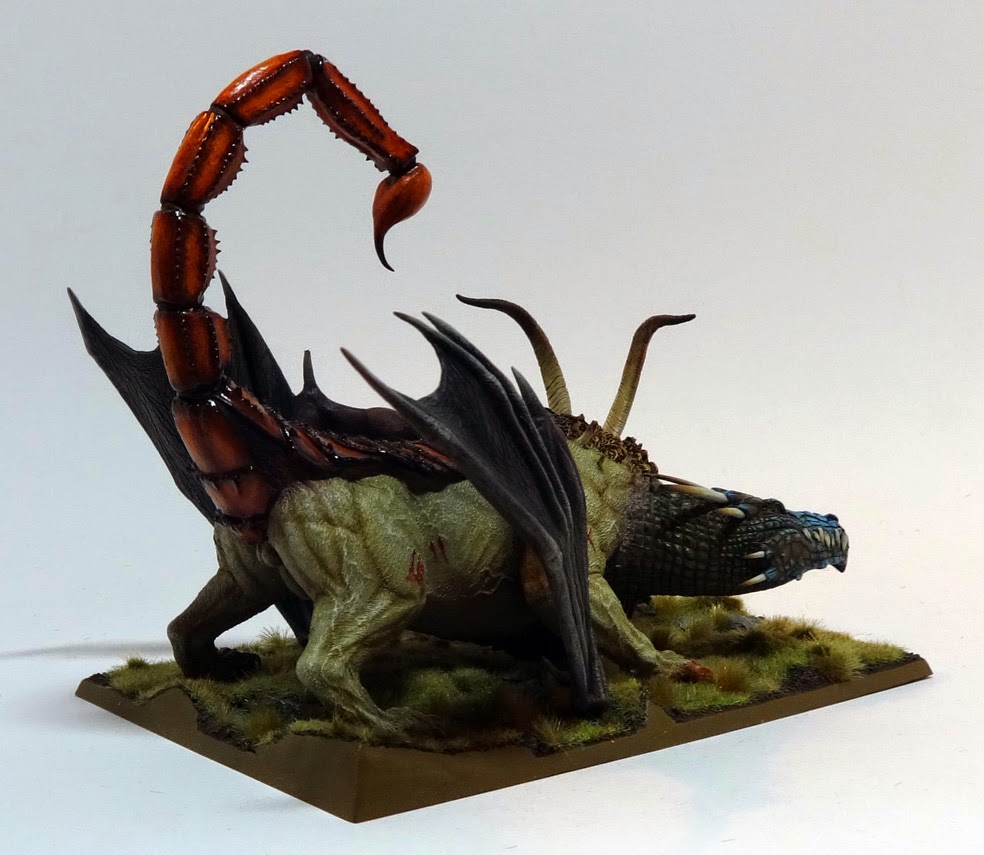 Assembly was fairly simple; the individual lion claws were fiddly, and other than that, some sculpting was needed to mask the joins. 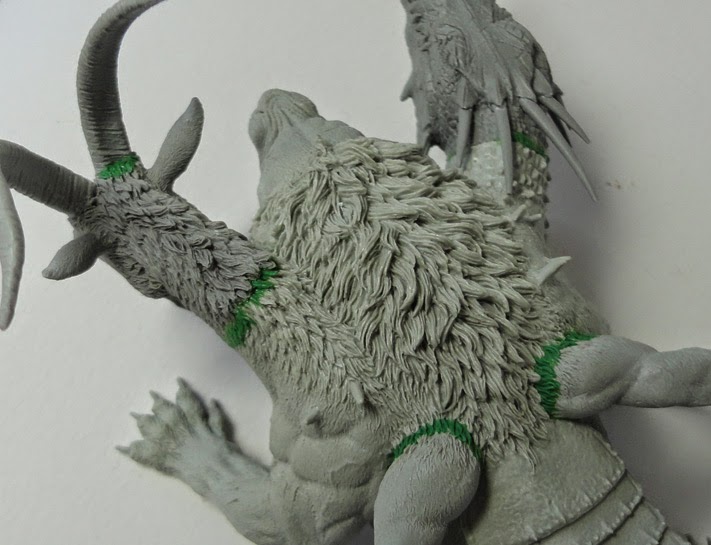 Technique wise, my main take-home point was painting fur. For me it’s all about starting with a light white or off-white and using glazes to punt it towards the colour you want. The mane, for instance, began as a mid brown overbrushed Dheneb Stone and then drybrushed up to white, followed by five or six successive glazes, each applied before the other had dried, to effectively wet-blend the shades into each other. This made it easy to vary the hue of the fur, and kept the colours vibrant. 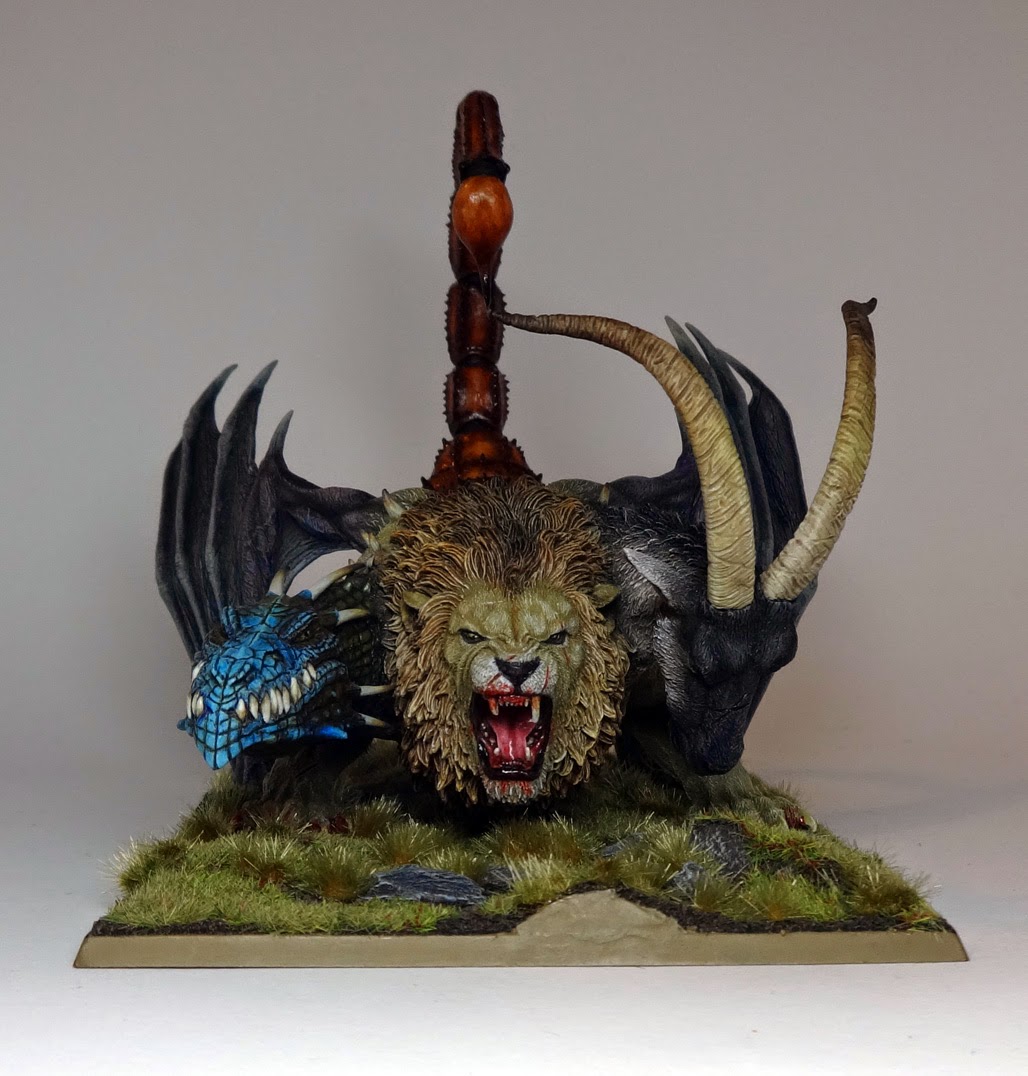 The base was something of a project in and of itself. I didn’t want it to distract attention from the model (not that too many things could draw attention away from that thing) but at the same time, couldn’t just have the thing standing on a patch of perfectly flat ground. Would’ve looked weird. Besides, I needed to build parts of the base up a little so that all six of its limbs were connecting fully with the ground. Hence: 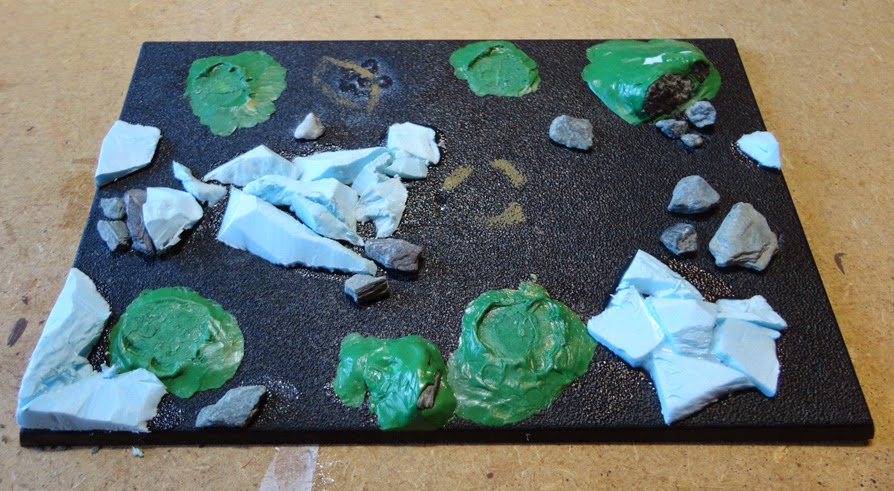 I smoothed it all over with filler, and tried to make the finished product look something like semi-boggy moorland. Here it is from the model’s-eye-view:

And now, finally, it is finished. Dear sweet Jeebus. To conclude, here are some photos to put things into scale (beyond the fact that it’s on a base generally reserved for an Arachnarok). 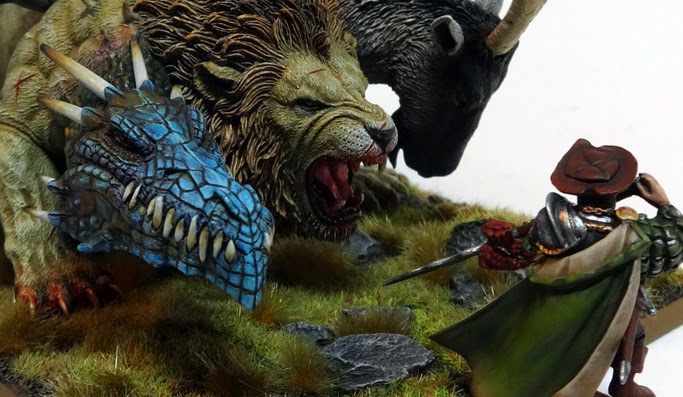 When confronted with his new pet, Nick described it as “bang tidy.” Urban Dictionary has subsequently informed me that this is a good thing.