By Charlie January 22, 2018
Charlie: Despite Dungeons & Dragons being the most famousest of the RPGs, I haven't actually played it that much. Thus, when Tom offered to run an old-school D20 adventure, I duly signed up in the interests of broadening my nerd palette.

We decided to play a group of total misfits, and thus there was Hadras the polite yet horrifyingly shooty warforged scout, Krog the existentialist barbarian, and Nozz the goblin shaman, who was neither polite nor an existentialist. 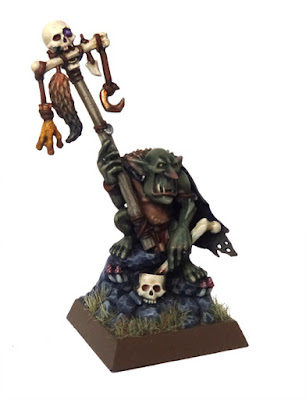 Playing as a goblin isn't exactly an obvious choice, but it was deeply enjoyable. I spent the day expressing myself via the medium of cockney viciousness and bodily functions. Let the record state that I did at least make myself useful. Most of the time.

The model I used is GW's grot shaman, and he went on a square base because I fully intend to use Nozz Brewsnik in Skazzwuzzle's goblins.

I've had my eye on this little chap since he came out. The hanging animal bits, the skully bowl, the stirring bone... he's just so classy. 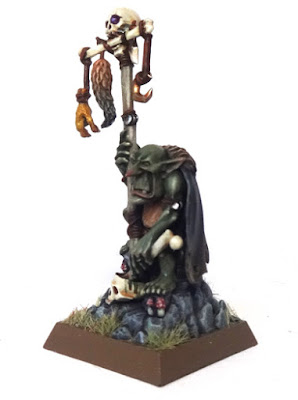 As with Skazzwuzzle I went for more naturalistic skin tones compared to GW's iconic look, and furthermore I avoided any intense colours on Nozz as I imagine he's the power behind the throne type. Does this approach make for a good display model? Possibly not.

I made two little modifications: removing the topknot and softening the eye sockets. The cheekbones are very harshly sculpted, which I found at odds with the softer lines elsewhere on the model, so I did what I could during painting to offset that. Finally, for comparison, here's the studio's more stylised version next to my own murkier effort: 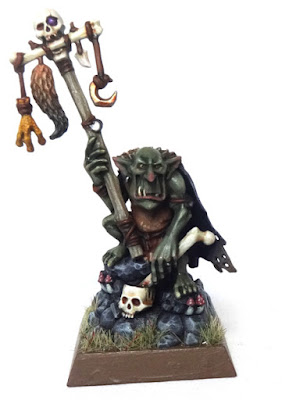