By Jeff January 11, 2018
It never fails does it. You do something "clever" like gluing your Land Raider together leaving the tracks off to paint separately. Then, the hobby butterfly wanders off, gets wasted on Buckfast in a alley behind an off-licence and starts painting Orks or something. Then, years later it sobers up, looks in it's boxes and goes "ooh, a Land Raider!" only to discover... 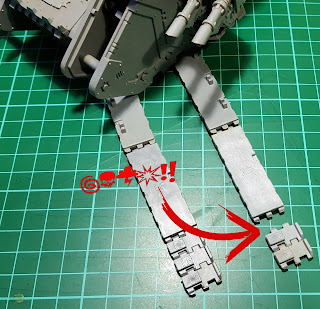 Yeah, I was missing a section of track. Now I contemplated a range of options for solving this ranging from the impractical (fairy godmother) to the expensive (bits sites will sell you a whole track run for about £8). I certainly didn't want to leave an ugly gap or not use my (how much are Land Raiders these days... good lord) £45 kit. So... solutions: well I could fabricate one from plasticard. But that's a hell of a lot of time and engineering to pull off. My scratch building fabrication skills are "neophyte" at best so probably not that. Then I remembered an old dodge we used to use back when moulded shoulder pads were a lot rarer than they are now: Green Stuff Moulds. 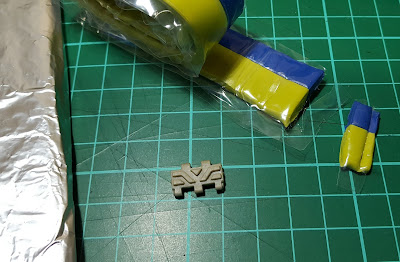 Now I am not an expert on this in any way, so we're learning by doing here. You can learn from my mistakes. For starters I wrapped a painting tile in tin foil to give me an easily removed surface to work on. I busted out my ribbon of green stuff, chopped off a lump a bit bigger than the part and set to mixing. Once it was nicely mixed, I smooshed it out onto the tin foil. 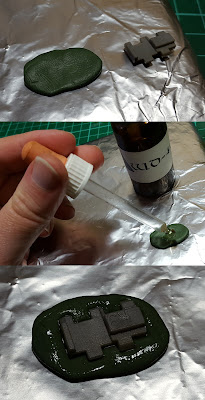 Next, I have to stop it sticking to the part. You could use a bunch of things here, olive oil for example, but I tend to use WD-40. Because it isn't a proper lubricant (it disperses water, that's what the WD stands for apparantly) it cleans off fairly easily but puts a layer of "sticky-be-gone" for just long enough. I squirted a bunch into a dropper bottle ages ago and use it when I need slightly more precise application than "those four square inches over there". Finally I summoned up the bravery and pressed the part into the blank. 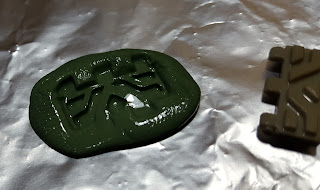 And here is the result, and my first mistake. Wait a little longer before removing the part from the mould, see how it has dented a little on the left? That'll cause problems later but not too many. I'd also like to note that I learned this lesson on day one. Why? Because we'll be in day two later and I'll forget it already... sheesh. Anyway, speaking of "day two", I now left it overnight to cure and harden and we'll be back to check it out.

Above: a possibly unnessecary picture... illustrating my mixing up a nice pad of green stuff roughly the thickness of the finished part and then jamming a WD-40 re-lubed (few things are made worse by lube) mould down on the top and giving it a firm press. I peeled off the mould to reveal:

Not too bad. That left side screwed me but that was easily fixed by pressing down with the knife to redefine the edges. The result is pretty good. Here's where I make my next mistake. The same mistake I made yesterday. Sheesh once more. 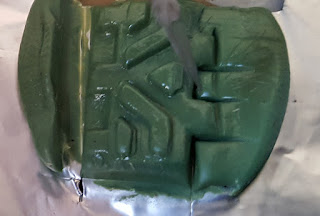 I was worried about the green stuff curing hard before I'd cut it out so got on with cutting out the outside edge to release the cast. Had I stopped there then there probably wouldn't have been a problem. But oh no, I had to go ahead and start pulling away the excess from the still soft cast. Head-desk. So cue a bit of reshaping and re-squaring. Learn my lesson better than me. Cut out to be sure, but wait for it to mostly cure before you remove the excess. It'll be fine. Oh, and remember lessons from a mere 24 hours previously. 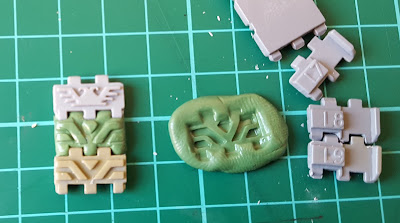 But even with those problems, the results are good enough that I don't mind at all. It'll disappear into the track links and won't stand out enough to cause a problem. This link is the one at the back that disappears into the track guard so it'll never really stand out. So there you go! We're Learning With Jeff and figuring out how to replace lost bits. Doubtless, the minute that I superglue this into place on the tank I'll find the errant link. Hope this was helpful/inspirational, more shinies soon.