This is a post of two halves orbiting around the theme of “I PAINTED THIS.” Over the last year, I’ve made the shocking discovery that having deadlines results in getting stuff done. Conversely, anything without a deadline was either done slowly or not at all. Fancy that.

Annual hobby progress log & plans for 2018
Lately I’ve been doing the hobby equivalent of spring cleaning: finishing off the last little bits of various projects. Last year was billed as the Year of Finishing, and I’d call it a moderate success. In 2017 I…

Things I didn’t cross off the list included finishing the Cadians I got a while back. Whilst I painted the platoon, I still needed to paint the kasrkin/storm troopers I got off ebay. Well now they’re done, with a head swap to boot. There’s a few things I’d like to add to that army, but they can wait. For now, I’ve painted everything I bought. 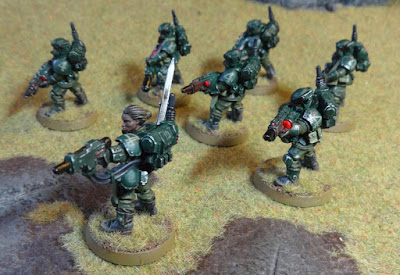 2018 is looking like a mixture of backlog clearance and new stuff:

1. Finish Inquisition & Deathwatch stuff (partially done, as per 2nd half of this post).
2. Complete all half-done Empire bits in time for a huge battle with Maisey in early June, including:
- General on griffon
- 20x greatswords
- 5x outriders
- 10x crossbowmen
- 20-30x free company
- 2-4x knights (so that I no longer have a useless unit of 8!)
- Engineer
3. Renovate & expand Skazzwuzzle’s Bloo Moons with more goblins and… gasp… orcs! The greenskin stuff is for something I’m running for Jeff & Maisey in late November 2018, and is a pretty huge project. I’ve already got the models, many of them half-painted… but they'll need a lot of love before they get anywhere near my gaming table. Should keep me busy for the second half of the year.

Hopefully with all that I’ll find the time for one or two tiny side-projects. I really want to paint a few primaris marines, because they’re so goddamn pretty, and it would also be nice to finish the Sisyphean task that is the wizard’s tower, which has been on the workbench for… a while.

New acolytes for Inquisitor Drake
Inquisitor Drake is one of those characters where I wrote him as an NPC about a decade ago, and he sort of pootled his way into becoming my player-character in Inq28. I’m OK with his characterisation, but his major failing, for me, is that he has a name which I pulled out of my ass at short notice and am now stuck with. Does he change it by deed poll? Do I retcon it? Or do I just accept Drake’s name even though it suffers from coming off like it’s trying to say “I’m a badass and totes named after some famous British dude with a boat”?

Either way, Inquisitor Badass Name now has some new acolytes. Or rather, he has one new acolyte, and two acolytes who were painted years ago but for some reason never properly based.

This is Nadiya Zelenko. She was an unsanctioned psyker living in seclusion atop a derelict hab stack in Hive Sejanus. Drake’s team got a tip-off and brought her in (why yes, that was an actual mission that we played through, and I told myself if the players did a great job I’d make Nadiya a recurring character).

Drake pulled strings to ensure that following her basic training in the Scholastika Psykana, she was released to his service, as he wanted someone who knew the area, and furthermore was feeling increasingly exposed given the total lack of psykers on his team. Since she’s new, she’s got basic equipment: the ubiquitous body glove, a sidearm, and a battle rifle that means she can stay back from the horror of close quarter combat whilst she hones her martial skills. Having been effectively rescued from a potentially very short life of terror and solitude by Drake’s team, she’s inexperienced but dedicated. Behind her back, others in the team refer to her as an idealist with a rosy view of the Inquisition’s purpose. Drake sees this as a quality more than a flaw, but then, those same people think Drake is an idealist too. 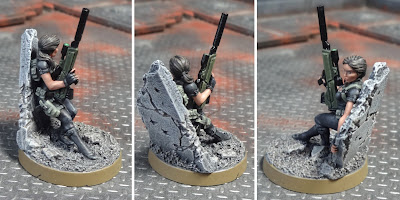 Next up is Acolyte Ashar Lear, which is Alex’s player character in Inq28. Agent Lear is a pariah who has all the indoctrination and enthusiasm the Schola Progenium had to offer, and all the charisma and intelligence of a sea cucumber. She looks forward to the day she becomes a full Inquisitor, but in Alex’s words, “that day will never come, because she’s just not that smart.” She dresses the part, though, and has become lethal in a fight.

The miniature is from Hasslefree. Her melee weapon is sculpted as a chainsword, although Alex was keener on the notion of having a power sword (clearly she hasn’t got on board with the 40K brand of ultraviolence…). Thus, I shaved the resin weapon down until it had an edge.

With Inquisitor Badass Name’s warband complete, at least for the time being, here’s a family photo. Yes, I know, the base rims are inconsistent. Charadon Granite doesn’t exist any more and I’m waiting for something similarly off-grey to turn up in the post. That said, putting mid-brown on the others might be a good shout given how much it'll help them blend into a bigger variety of gaming boards. 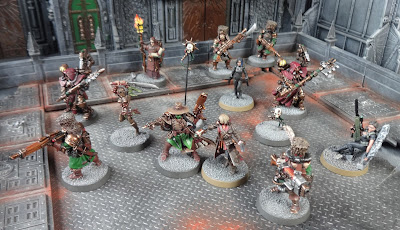 In terms of how to use these guys in 40K, it’s imperfect, but breaks down like this:


Is all that worth 20PL? Maybe in conjunction with an actual army. The enginseers will certainly help keep my mechanised guard afloat! The only future plans I have with these Inquisition chaps is the possibility of adding a second Valkyrie and a squad of Inquisition storm troopers. I already have an old metal unit of them painted, but it occurs to me that the overly-ornate tempestus scion models might actually look kind of OK in Drake’s antiquarian colour scheme.

Right. Onwards! To the Deathwatch! There’s nothing like finishing things to get me excited to finish even more things.