Excuse me while I have a little dizzy moment as I realise that was FOUR YEARS AGO!!

Right back in the room. Back in 2014 I introduced a little side project as a break from my endless undead army. This was a band of Ogres named the One Finger Tribe: The Protecterors of Ostland and their back story can be found Here- Blood, Sweat, and Flab.

Since then I actually finished the rest of the tribe but had rudely neglected to share them with you. So without further ado I give you, The One Finger Tribe: 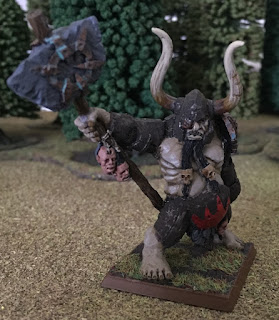 Leader of the tribe. Lost 4 fingers on one hand after winning a bet over who could catch a spinning dagger out of the air. Nargutt isn’t the greatest leader, but he is the biggest and strongest, which is enough to keep him in power for now. 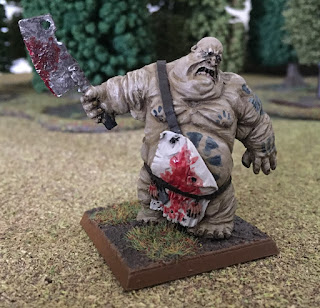 Short of brain power, big on chickens. What he lacks in intelligence he makes up for in violence, an affinity with gut magic, and his now infamous offal and rock stew. 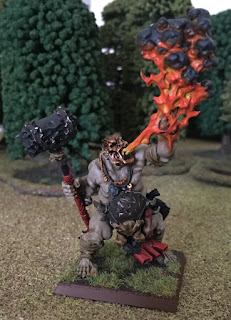 The tribes current Firebelly. Rhone is plagued by chronic gas after his initiation ritual. He’s the friendly sort but finds that no one will sit near him after meals, especially if Comeback has made a beastman vindaloo that night. 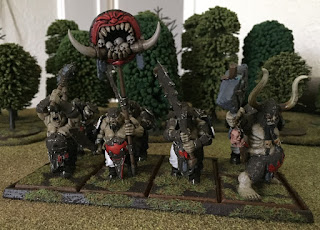 Vargol Iron face is the right hand man of Nargutt. When he isn’t helping Nargutt with counting all the way up to 16  he is commanding the Ironfaces. These are the biggest and toughest boys from the tribe and act as Nargutt’s bodyguard. Due to this status they have access to the biggest weapons and first dibs on any armour that they can scrounge up. Vargol only trusts Zorg with is standard depicting the great maw, painted red to be extra angry. Pothead is the Ironfaces bellower, named such for the pot he bent onto his head so he wouldn’t lose it. 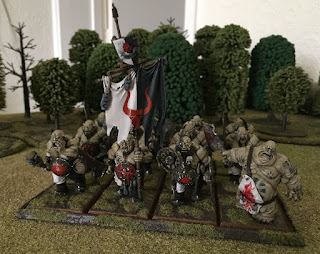 Yarg first rose to take over as the Crusher of the Bulls after he accidentally got involved in a Empire led mission to stop a necromancer from bringing back a potent Vampire. Yarg had gotten lost after chasing a Gor herd away from Salkalten. He was sitting down minding his own business when an Empire Captain approached him. Impressed by the shiny armour and very tall feathered helmet he (vaguely) remembered that he was under contract with the Empire and decided to be good and help out the Captain. He smashed a lot of green things. Then smashed a lot of dead things. The captain said that Yarg did good, which made him happy, even after he lost his favourite cow carcass, which had made him sad. Yarg keeps Flappy close by to carry the standard bearing the colours of Ostland, of which Yarg is so very proud. Colin, Yarg’s Bellower, is the cousin (on his mothers side) of Comehere Chickenchaser and tries to keep the simple minded Comehere as close to him as possible. During battle Comehere is normally found in the protective cover of the Raging Bulls.

Deaf Mungo is in charge of the tribes various black powder weapons. No two are the same, mostly because they have been stolen from different sources at different times. The Boomsticks tend to keep to themselves within the tribe. Seeing themselves as somewhat superior to the other Ogres, partly because they have figured out how to use guns, but mostly they are usually the first to kill something on the battlefield. Most of the other Ogres claim that they are cheating, but Mungo doesn’t really care what the others say because he just can’t hear them. 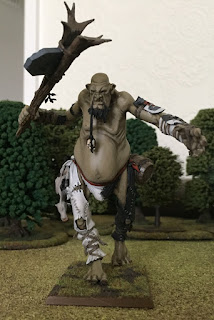 A Giant that Nargutt had wrestled to the ground in the Middle Mountains just to prove he could. Little Karl has taken to simply following the tribe around and eating Gnoblars. 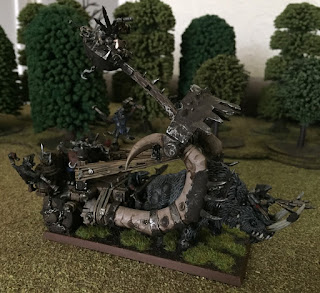 This precarious contraption was built from parts stolen from the local area by the small number of Gnoblars that have survived the hunger pangs of Little Karl. The Flingy Fing was inspired by watching Vargol throw a handful of cutlery at Deaf Mungo for not listening to Nargutt during one of his ‘Strategy’ meetings. These meetings normally start out with trying to plan where to raid next, then pass through the eating, drinking, and brawling stages before everyone has forgotten what the plan was and just goes back to eating.

And there we have the tribe as it stands. Although, as the threat from chaos in the north has started to subside, Nargutt is thinking about taking a holiday. Somewhere warm down south maybe?