By Charlie August 27, 2018
Having recently written the Astartes Librarian rules for our in-house (or in-bunker) Deathwatch ruleset, I was so taken with space wizards and Dewey decimals that I picked up a brush and painted the last of the unpainted dudes in the Deathwatch cabinet shelf. 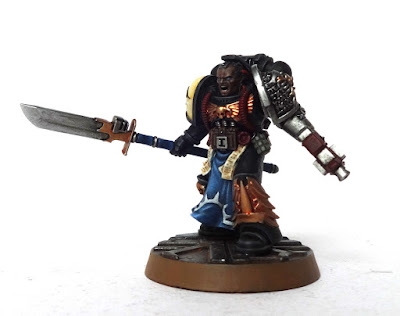 With the exception of the halberd this is the Jensus Natorian model as it comes (I've never been a fan of the swirly designs on librarians' force weapons, so swapped it out). If the weapon and ethnicity swap wasn't a giveaway, he won't be Jensus Natorian in our own games of Deathwatch. Jon heard about how librarians work in our rules and was immediately down for playing him in November for our third mission (read about the last one here if you want a random spurt of space marines wrecking face). 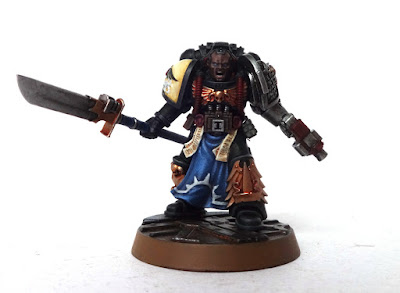 Jon named him Tymon (pronounced Tay-mon) Ausonius. That's all there is of his character so far; Tymon Ausonius, Blood Ravens Codicier.

The painting process was fun. Dark skin helped offset his beefsome face, and glowing blue eyes contrasted nicely with the darker skin, although that doesn't come out too well in the photos. 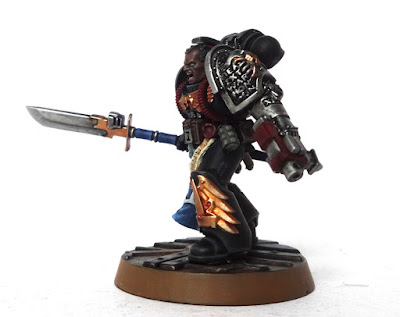 As an aside, I find it ironic that I'll spend eight hours painting a model but can't be arsed to invest much time or money in refining my miniature photography skills. To look at the photo you really wouldn't believe there's four layers of relatively high-contrast highlighting on that red bolt pistol, would you? Turns out laziness doth not yield great results.

Back to the painting. One thing I struggled with was the scrollwork on the chapter icon shoulder. A scroll sculpted onto a background I'm canonically obliged to paint beige? Thanks, sculptor. A grey tone for the scroll helped differentiate it, but I did a lackluster job of making it pop. Never mind, I'm happy with the rest of the model. Being a ponce, I used pointillism to get the effect on the tabard/power-pinny/loincloth. 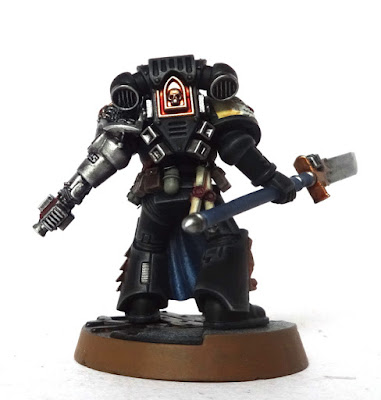 If these models were being painted for display, I'd definitely have used a different basing scheme that offered better contrast against black armour. These bases do a great job of blending into the scenery we use for Deathwatch but are an awful choice from a composition perspective, and would be much better suited to brightly coloured minis.

I'll try and post something non-Deathwatch next time, but only as a palette cleanser. If I want to use Deathwatch dudes in Kill Team (and I really, really do) then I need more squaddies, and each squaddy takes time.