By Charlie August 06, 2018
Being a suggestible person, particularly where Photoshop projects are concerned, I was recently goaded into making a map of the Beard Bunker's own fictional playpen, the Achernar Sector. Today's post is about why and how I made it. If nothing else, it's a visual summing up of the crazy amounts of detail we've put into our little corner of the 41st Millennium.

You what mate? Interactive?
Indeed. Once my Photoshop fugue dissipated, I sent the map to Tom (who suggested it in the first place because he needs to visualise something to think clearly about it... like me, but moreso).

He dove into the noosphere with wild abandon and stuffed his mechandendrites in all the fun places.

When he emerged, he had assigned links to coordinates on the map, such that if you click any of the names in the image, they'll take you to the relevant page on the campaign wiki, and because at this point Tom was entirely out of control and squinting with obsessive glee, he then put little map symbols on each of those wiki pages so you can click on those to bounce back to the map and keep exploring. He then went completely nuts and starting doing all sorts of helpful things on the wiki, which is largely irrelevant to this story.*

Now in case the image caption above hasn't laboured the point sufficiently...

Why do you even need a map of the whole sector?
Jeff created the Cetus sub-sector five years ago (five?!) as a setting for our Inq28 adventures. We've ended up playing all sorts of stories, from 28mm Inquisitor to 40K to Deathwatch to Battlefleet gothic. Neighbouring sub-sectors got added when we wanted games to be set nearby to justify the inclusion of certain characters, and thus, the Achernar Sector was born. Once we had a whole sector, I suppose it was inevitable that there'd be a map at some point. Tom just gave me the nudge I needed.

Reconciling the old maps with the new one
Jeff made the first map for the setting: a nice antiquarian navigator's chart of the Cetus sub. The next sub-sector to get a map was the Scyrian Expanse, which was an utterly insane project in which my friend Mike helped me procedurally generate 105 star systems (on the basis that all sub-sectors must have a great many star systems, but only a tiny minority contain anything of note).

As a point of nerd pride, I wanted to make sure the new map didn't invalidate the old ones. When making the map, I put the original navigator's chart into the Photoshop file as an extra layer, rotated it so that its bearings were aligned with the other sub-sectors, then used it as a template to place the Cetus stars. Similarly, all 105 stars in the Scyrian Expanse are faded into the background image for that section of the map, taken directly from the original PSD file.

Future-proofing
Keen observers will note that the map's title reads 'key planets and major warp routes'. One of the downsides of making a map for a sector that hasn't yet been fully explored is that things might change, and you might want new locations. Hell, you might even change the warp routes. If this happens, I'll be able to just add said star in the Photoshop file, and Tom can just add coordinates for a new URL. That way, having a map shouldn't be constraining for people with good ideas for a new star system.

Unexpected bonus fluff
I often find the process of making maps naturally produces more story concepts. After I laid out the sub-sectors, I noted there was a big gap between the Cetus sub and the Handrothian Cluster. I could have rejigged things, but it seemed more fun for there to be a reason for that gap, and thus, the Vascoda Confluence was born, opening the way for some interesting dilemmas for players in a rush to get between those two regions of space. 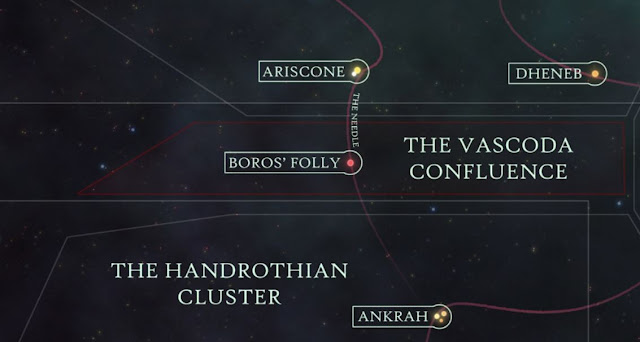 How I done it
There are plenty of Photoshop tutorials online, and to do a complete set of instructions to make this thing I'd need to make a YouTube video. That's a lot of effort, but I can at least provide the broad brushstrokes of the process.

Essentially, I started out by opening my Photoshop file for the Scyrian Expanse and then quadrupled the canvas size - at least that'd save me some work porting in stuff I'd need from that file. I then blocked out roughly where I wanted the other sectors to be with basic text layers, then created a template for a basic star system: just a folder of layers containing a generic star (i.e. a coloured dot, then a copy of that dot with some gaussian blur to give it a glow, plus some minor tweaks) a text layer for the star's name, and the outline, which was just a case of using the selection tool to create a circle, then holding shift and adding a rectangle to that selection, then using 'stroke' to create a coloured line. Then, whenever I needed a new star, I'd just duplicate that layer folder and move the new star to wherever I wanted. Obviously stars come in many flavours, so I'd resize the star and recolour it.

The more technical elements are the warp routes and the background colours.

The Warp Routes were made by drawing paths to ensure smooth lines, then setting the brush tool to the colour and texture I wanted, then right clicking the path and using stroke so that your brush settings are then applied to a line on the currently selected layer, after which... delete the path. Job's a good'un.

The background nebula-ish stuff (SO MUCH SCIENCE) was done by getting a new layer and randomly adding big areas of colour using the gradient tool in transparent and radial modes. I'd do a bunch of these layers, setting the layer opacity super low, then going to the filters menu, selecting render clouds, then using a big soft eraser brush to add more definition. I didn't render clouds on all the layers; some are just big smooth areas of colour set to 5% opacity. In all there are only 12 layers in the background colours, ranging in opacity from 5-35%.

Finally, I added in stars, but quickly realised I'd have to mute them a little so that the image didn't become so busy it was hard to read. I considered leaving them out entirely, but the image needed texture.

As to the coding needed for the interactive part... er... well if you're curious maybe Tom will leave some helpful pointers in the comments section since I have no idea about that stuff.

Et finalement
Sometimes I wonder if someone will ever stumble upon our increasingly hefty wiki and decide to use our campaign setting for their own games, or at least as inspiration. It seems unlikely, not least of which because we have such a small (but discerning) readership. Even if we've only ever given a handful of hobbyists the seed of an idea they like, which they went on to use for themselves, then that's gratifying.

* Suffice to say I had been tending a large wiki garden alone for years, and a second gardener turned up with some power tools and a hungry look in his eyes. I sat back and watched from a distance with a pleased smile on my face as raggedy hedges became precise geometric shapes, new paths were cut in untended ground, weeds were uprooted, and metaphors extended past the point of necessity.