By Maisey August 13, 2018
We here at the Beard Bunker have a habit of getting a little carried away sometimes. None more so than myself. During one of our role play sessions we ended up creating a town militia in order to fight off some gribbles and to protect the good people of Ferlangen. I got it in to my head to then go on a create an Empire army based on that session. So I hear by present the Ostland State Militia.

The force was mostly made up of bunch of models from my first abortive attempts to get into the Empire plus a couple of extra characters I picked based roughly on our role play characters. The exception is the captain, who was an existing model I picked up because I liked the feathers. 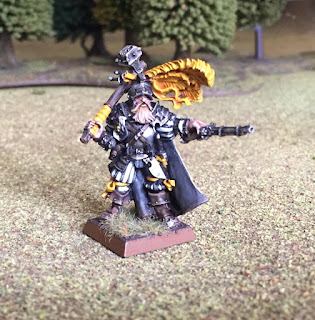 Captain Wilhelm Holtz. A man of much beard and even more feathers. He is straight forward honest type. A little too fond of Dwaven ale but he's pretty handy with a hammer. 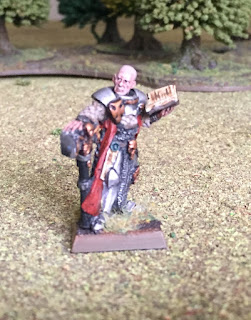 The rest of the characters in the army are analogues of our role play characters. Our band consisted of a warrior priest, a fire wizard, a little sneaky thief assassin scary girl, and an engineer. What I didn't want to do is to try and replicate our characters exactly in 28mm, partly because I wanted this army to be based on our role play adventure but to be free to do things that aren't related. Also I have such a strong image in my head of who our role play characters are, what they look like, their behaviours, how they dressed I knew it would be impossible to try and find miniatures that truly reflected my mental image of them. So what I have is the budget non-copyright infringing versions of them. 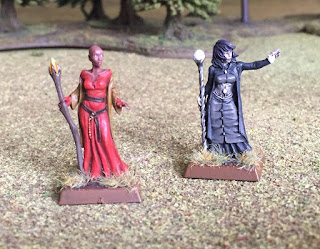 The warrior priest above is from Scibor miniatures and the two wizards are from Hasslefree. The Scibor miniature is a little bit too big compared to the GW and Hasslefree models. Both the wizards are lovely little sculpts. The left one is my fire wizard and the other is a grey wizard. I know the role play character is supposed to be a sneaky assassin type but the grey college suits her. 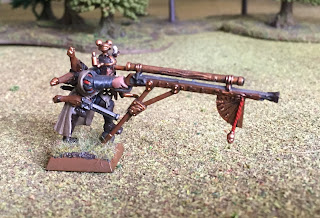 When painting this lot I stuck to the black and white of Ostland for all of the state troops and the characters linked to the military. What I have done however is vary the trim colour for each unit. So the Ferlangen town watch below, I've given them a rather nice blue trim and feathers etc. 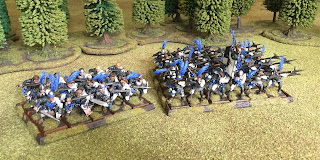 I wanted to have each unit visually distinct, which makes sense to me, as these units are from different parts of the state and would have their own identities. Also in the confusion of battle being able to tell who was who quickly and easily would be very handy to a commander and to the troops. 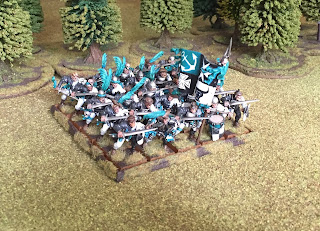 The other main line unit I have is the Salkalten Swashbucklers, who a unit of swordsmen from the coastal town of Salkalten in the north of Ostland. As with most of our fantasy armies the banners are where we get to inject some character into the units. Also have a little fun with some free hand. So both line units have banners showing both their own identities as well as their state heraldry. In this case having the bull for Ostland. 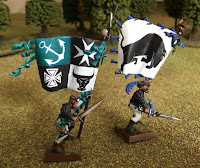 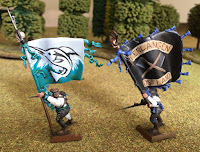 No Empire army would be complete without a little bit of ranged support from black powder weapons. I did pull on the existing history and include the Fireloques of Ferlangen. Show here in a lovely bright red trim.

Also to accompany the engineer a few artillery pieces to really add some punch. I call the cannon Winona, as she's the most reliable cannon in the uncharted territories. 3 bonus points to anyone who gets that reference (Charlie excluded, as he already knows it). 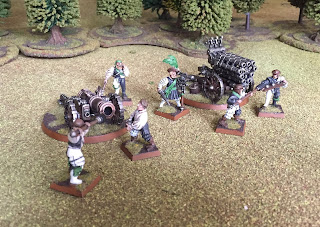 I do have a unit of knights, however when pulling all of this lot out of their case I realised that I hadn't actually finished them. I got them to the point where they would be acceptable on a table, but not nearly good enough to share. So they are going back on the shelf of shame along side all my other unfinished things. As soon as I finished the slowly shrinking undead pile then I'll revisit them and get them properly finished.