By Jeff September 24, 2018
Everyone has those elements of the hobby that are a refreshing favourite. Some bits - no matter how much you want to do them - feel like a chore. Others are just a delight. For me, small warband type things where I can really focus on every individual model as an individual and still play a game at the end. So when I need a bit of a hobby-refresh I tend to reach for this end of the hobby. Inq28 is just perfect for this so despite the fact that I already have an Inq28 warband I just had to plan another. This time it is the warband of one Edythe Hinzer, Ordo Xenos Inquisitor and a bit of a renegade.

I'm going to build the warband up gradually and share them as I finish them each time I need a little pallete cleanser. For each of these I'll talk a little bit about the painting and then introduce the characters as Edythe, her backstory will build up and fill in over these posts. So lets meet these fine folks, starting with the ultra heretical companion, the Saim-Hann ranger:

It's been a while since I'd worked with any of the old metals and gosh, am I spoiled by the new well-cut plastics creating lovely undercuts and delicate cloth. I don't know how clearly you can see this but that right leg beneath the cloak just isn't there. It's a flat plane of metal. So I freehanded in the leg disappearing into the shadow of the cloak. Saim-Hann is the nearest craftworld to our little Achernar playground so having the armour a nice bright red provided some welcome pops of colour. I wanted the camoline cloak to closely match the ambiant basing without disappearing into it. So I used the same Stone Grey and mixed it with some neutral grey and some German Camo Black-Brown. A combination of broad stripes and dots of these three tones led to a pleasing camo effect and a couple of thin washes of black and brown washes mixed together gave nice shading and thin skims of Stone Grey led to a suggestion of highlighting. 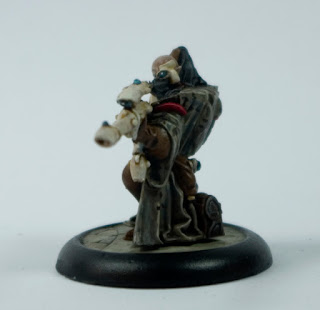 For his skin I wanted a slightly inhuman effect so started from Rakarth Flesh, with Reikland Fleshtone over the top this makes a nice pale base to start from. With the wraithbone - Silver Grey mixed with Bone with a sepia wash over the top and highlighting - finished he was complete, and very, very pretty. So lets meet him:

"I generally prefer to choose my agents, it's fair to say that Darahithon [Dara-hi-thon] more adopted us. Somewhat like a felid that decides that your house will do to live in. While I was patrolling the Halo Zone I ran into Dara on Ultred's World and my curiosity got the better of me. I had wanted to try the Eldar language primer for a while and here was a lone, relaxed specimen to try it out. It turns out my Asuryanii is useless, but mercifully he speaks Gothic with a heavy accent and an annoying tendency to use a word and expect all meanings of that world to apply at once. Over drinks we got talking about why we were there and figured out that we were both essentially in the Emergent Threats game. The next day, we set off and he came with us, natural as anything, as if we'd invited him. I asked him what he was up to and all I got was "Emergent Threats, efficiency". He's followed us ever since and seems to have 'joined' us as much as can be said.

"Now though, I'm returning to Imperial Space and have no idea what to do with him. He cannot be seen if he doesn't want to be. He wears bright scarlet armour but disappears into the sparsest cover. but even this won't be enough in Imperial society. For now he can stay at the temporary base on Erydimae and we'll see from there. I have a nasty feeling that despite his saving my life half a dozen times and much companionship, ours is an alliance of convenience and mutual use. Once he isn't free to wander and learn, I fear boredom will drive him away and I am ashamed to say it would solve a lot of future problems for me." 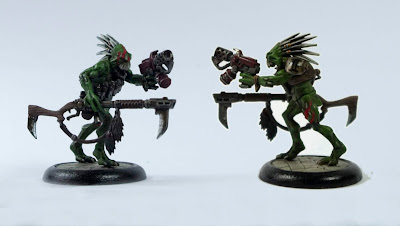 I've wanted to paint a Kroot for ages, they're a nice natural canvas to use some of the animal painting techniques I like to do. I also wanted to do quite a saturated colour for him as most of the Kroot I had seen are quite desaturated and camo-toned. I added some scarlet warpaint to give him another splash of colour - and actually red has become a unifying colour for the warband. Add some woodgrain on the rifle and get a grim, clotted-blood look to the scalps hanging from his sling and he's all done. 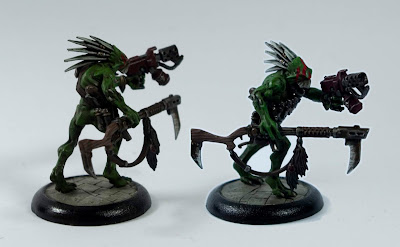 "I divide my followers into bands of trustworthiness, there are my agents; who have served me for years and do so for ideological and loyalty reasons. Then there are temporary hires who are for a particular job and are strictly need to know. Finally there are long-term hires who are more embedded but have little motivation above finanacial recompense. Khee'hak Torrk is definately in the third catagory. I've worked with... him, her, it... for years and yet Torrk has never shown any loyalty beyond pay. One month when I was running short on hard currency Torrk was literally packing to leave once the pay period was up despite the fact that we were literally in hot pursuit of a suspect. I had to give... oh let's just say him, I've never seen him lay an egg, a hand flamer that I had used for years just to keep him engaged. Nonetheless, he fights like an Astartes to defend us and tracks like a bloodhound. While I pay him.

"Then there's the language barrier, he simply cannot speak Gothic. I believe the Tau use some sort of translation device or other means of communication. He understands me just fine but can only respond in the clicks and hoots of his kind. Only Doctor Adler has the gift of speaking his tongue. In Imperial space I'm going to have to make a hard choice, do I give up his considerable strength and resourcefulness or do I continue an expensive relationship of limited use in civilised society. Maybe I should just check in and then get back out into the Zone again."

Finally we have the Squat. We're working on a better name for the abhuman sub-species, Squat feels like a slur. At the moment we're using the Hasslefree name: Grymn, 'cos this is one of Hasslefree's wonderful range of counts-as-Squats. I realised that as she wasn't going to be part of an army I could go for a more colourful scheme than I would normally. So I decided that her normal fatigues would be a nice strong red and her armour would be an urban grey. There's not much to talk about with her painting. The amazing laptop - I have no idea how they cast her - was given some "telemetry" looking stuff in white with a smidge of green mixed in and then glazed in green ink to give it that 80's glowing green text look. 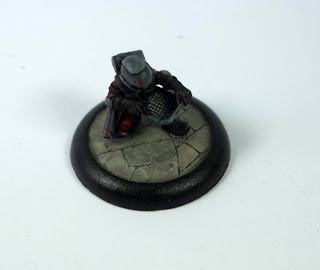 The basing is simple, Model Display Products resin bases painted with Stone Grey, a bit of tonal variation (ding*) supplied with adding small amounts of different browns to the basecoat. A thin wash of black was applied to line in the gaps and cracks and then the whole thing was drybrushed with Deck Tan. She's going to have another element to her as she is a recon expert with a whole pigeon loft of servo skulls at her command on a mechanised carriage.

"Skokhilda Randrocsdottir is my longest serving agent. We met when I was a senior Interrogator assigned by my master to advise Golgothan Imperial forces on the Ork menace. Skokhilda was a recon specialist for Grymn forces in the regiment I was embedded in. She caught my eye, I admired her professionalism, her calmness under fire, and of an evening we were thick as thieves around the campfire. She has good humour, unusual for her people, and is an optimistic soul. I like her a great deal. When the Ork filth were cleansed I invited her to come and meet my master. She never quite fitted in to his retinue and asked to come with me when I achieved my Rosette.

"She is astonishingly good at remote piloting drone craft and servo skulls in particular. She's also - in common with all her people - mechanically minded and less concerned about the, ahem, spiritual aspects of mechanisms than the practicalities. She is thus a vital ally in keeping my equipement and vehicles running perfectly."

That's it for now! More coming just as soon as I get the urge to paint the next batch, 'till then

*a long running joke counting how many times I said tonal variation in a particular post.