By Jeff September 17, 2018
It's Blood Angel o'clock again baby yeah! One of the major learning points of Operation Orbital Death Fridge (better known as the Salamut IX campaign) was that while power armour is just plain awesome, it does rather want for something in the sneaking front. Especially when bright red... Also, with the way power levels and troop choice requirements work these days, having some cheap troop choices available would be for the win.

Enter stage right some scouts! These are the first of 30 scouts I've got planned in order to have lotsa options - and heck, an entire scout army if I want. They're split into ten snipers, ten boltgun chaps and an assault unit composed of five close combat scouts and these lads and lasses above. These days, the Astartes shotgun is a tasty option and they look kinda badass too. 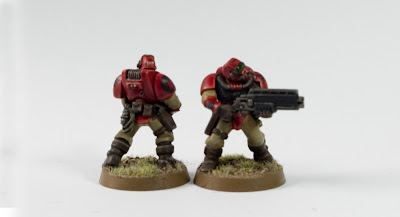 Painting wise, I had a few choices to make. First of all, lets be honest, red is not a terribly stealthy colour so it makes little sense to worry too much about camouflage (although the snipers will have their drapable camo cloaks). Instead, I went for a "fatigue" looking sand colour that I thought made sense for Baal and would complement the red nicely. For the curious, the actual colour is Vallejo Khaki Grey highlighted by adding Deck Tan. The red is something of a triumph of searching for new colours to replace old. Y'see, my Bangles were painted with the old range and the new ones just did not look right. Mercifully Army Painter Pure Red is a nice replacement for Blood Red, Doombull still works for Dark Flesh and mercy of all mercies I've found a Baal Red replacement wash! Vallejo Game Colour Red Wash is essentially the same colour so I can finally paint reinforcements. 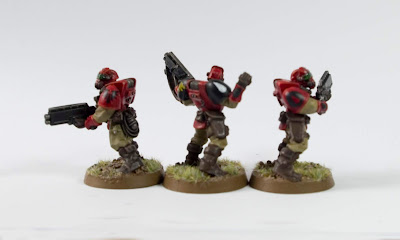 For the final picture we're taking a nerdy deep dive into my personal Blood Angels head-canon. I tweak things in the fluff like most gamers - it's why my land speeders are crewed by devastators and the bikers count as tactical marines for markings - and these guys are no exception. Obviously, all of them need Blood Angel markings on the left shoulder. I need to take a moment and be grateful that moulded shoulder pads exist. Oh gods have I been spoiled by them. Putting transfers on these was an absolute sod. I had to trim the top edge right to the transfer and snip out a triangle of backing film in between the wings to even get them to slightly lie flat. Even with MicroSol snuggling them down nicely they were godsawful to get on. On the right pad, most scouts have the red drop in black circle of the Xth company. But I was thinking about how they could attached to active companies and be trained, after all, how many veterans are there available to lead scout squads anyway?

Given that the Blood Angels are kind of screwed at the moment, I figured lots of scouts are being recruited and the veterans are really needed in power armour. So I came up with the notion of the scout sergeants being the marines of the 3rd company up for consideration as sergeants proving their worth and passing on their experiance by taking on training duties for scout squads. Hence the white blood drop of the third company on the sergeants. I figure each cohort of scouts comes with a senior training officer to continue the between-warzone training and "lead" the cohort and the squad leaders would be supplied by the company they're embedded in. The senior sergeant is going to be Telion with his Chapter Traits swopped for Blood Angels (why, why G-dubs is there not a scout character as standard?).

So that's the plan! I've got a ton of other Bangles stuff to do, it's one of those projects that kinda never finishes, but for now, we're focussing on the sneaky ones. Until next time and the sneakiest scouts (i.e. the snipers)...