Good day Beard Bunkerers. Winter is a great time to get some hobby done. The outside is either filled with rain or cold enough to make your face hurt. It's best stay inside and build little plastic models. Where the heating makes your basing dry faster and there is always tea available. My January has been filled with just a single model, but it's a biggie. The mighty Flying Fortress. 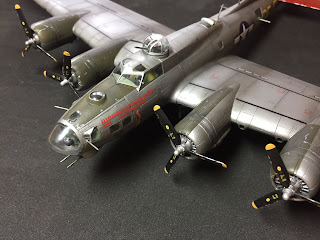 Amazingly I actually managed to remember to take some in progress photos. Some of which were to share, some of which was just I would have proof that I have fully painted the interior. 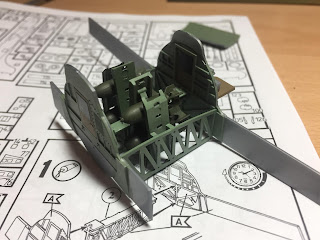 It started with the bomb bay. This part is actually visible from the outside if you have the bay doors open. Each section was built up and painted separately, then joined up to form the completed interior. 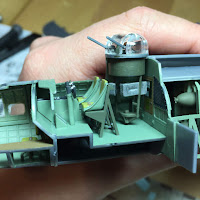 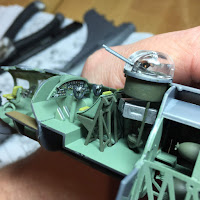 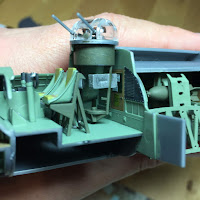 The cockpit has a lot of details. Full control panel decals, included where even flight log and warnings on the door. All of which are more or less totally invisible from the outside. You have see the seats, the tops of the control columns, and just a bit of the turret workings behind. 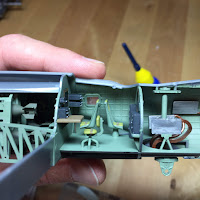 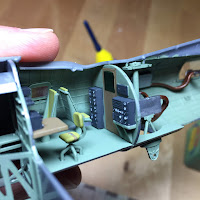 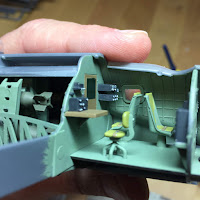 We also have a reasonably detail radio/engineering station as well. This can sorted be seen through some of the windows. I've kept the painting clean and simple. Mostly because I knew a lot of it wouldn't been seen and what can been seen isn't really seen in detail. 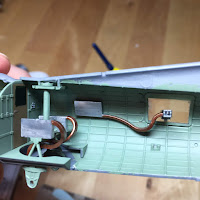 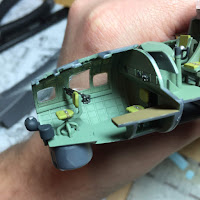 The waist gunner and nose section. A few simple details here. I could have done a bit of work here as the kit left these two sections pretty sparse however they are the two area's that could have been seen. There are plenty of after market parts that could have gone into detailing but I'm cheap and still learning so want to keep the first big kit as simple of possible. 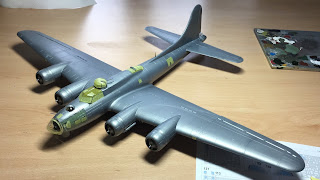 Once the interior build was done I could get on with building the rest of the aircraft. It mostly fell together pretty well with minimal filler needed to get it smooth. I did splash out on a masking set, a sheet of pre-cut masking tape shapes to fit the windows. These protect the glass work when painting the exterior. 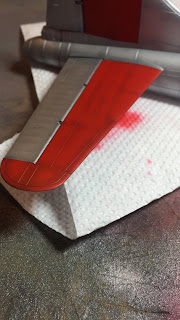 You can see on the red patches above the pre-shading showing through really nicely. This works on most large areas and looks good on tanks and things. in fact I can see it working really well on the smooth panels of T'au or Aeldari skimmers (still getting used to the new copyrightable names). It's a great way of getting mottled finish on panels. 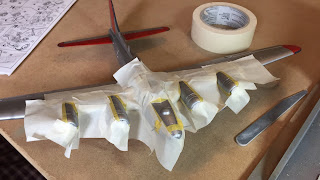 The red and green patches were added after the main silver finish. This required yet more masking. The yellow tape is a fine, flexible tape from Tamiya which is great for getting good clean edges between the colours. The rest is super cheap masking tape from a diy store, where you just need to protect the paint underneath. Tip, always de-tack it first. I normally just stick it to my jeans and then onto the model. It doesn't need much stick and you don't want it pulling the paint off from underneath. 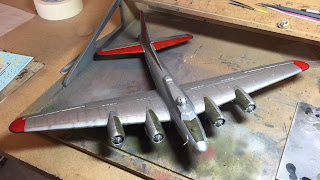 The main painting is done. This was mostly airbrush, but I went in with a hairy stick to do the little details where it would be too much of a chore to mask it all up for a tiny area. I gave it a couple of coats of gloss varnish (I actually use floor polish, it's cheaper and air brushes really well). Then on to the decals. 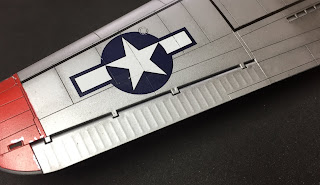 The decals are done using my (now) standard method, gloss coat followed by Microset then the decal, microsol over the top, then sealed in using more gloss coat. I didn't bother with the matte coat on this one as it's supposed to be shiny metal. 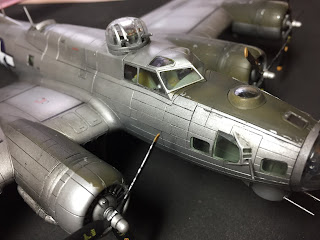 The matte green panels where there to protect the pilots from sunlight reflective off the nose/engines and blinding them. 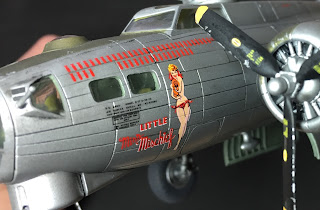 What American bomber would be complete without some form of half naked woman painted on the nose? 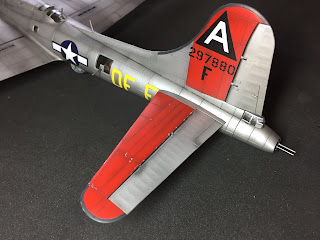 By the later stages of the war the Americans had given up completely on painting camouflage on their heavy bombers. They didn't really need to worry about raids against their own airfields as by that point the Luftwaffe was fighting a purely defensive war. It was also futile to try and hide the massive bomber formations that these aircraft flew in. It was far more advantageous to have them clearly marked up so they could easily maintain the defensive formations that they flew in. 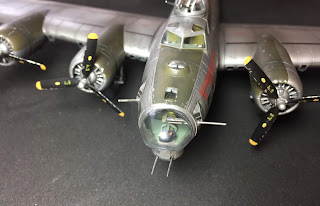 The paint was also heavy, so heavy that stripping off the paint made the planes lighter, meaning they could fly further and faster. As the paint was a matte drab it caused more air friction, slowing the plane down further still. So taking the paint off simply outweighed the benefit of having it. 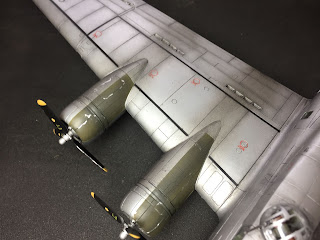 Once the decals had had a few days to properly dry. I set about the model with some oil paints to weather it up. First was a thinned wash that got applied to more or less every surface and left to dry off for a few hours. After that it got buffed off with some kitchen tissue, this just left the recessed panel lines more defined as well as helping pick out details. The heavier exhaust stains where done with more oil paint, unthinned, and blended in using a large soft brush. The joy of oil paint that is actually takes days for it dry properly, even once it's been thinned. So you always have lots of time to come back and work it some more. It's very forgiving, much for forgiving than trying to airbrush on those stains. 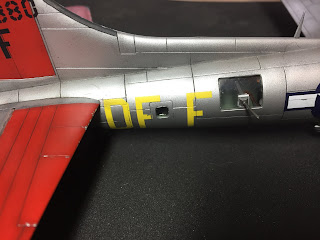 The final step was just some light chipping using some silver paint. It just adds a little something. 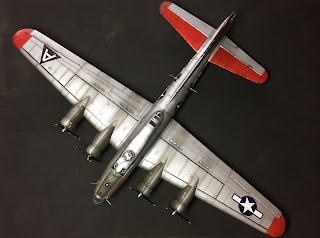 As with each model I do I learnt something new, got a little better, and found a few techniques that I would like to try on the next model. I will be using some of these techniques on whatever 40K project I end of up on next. As I said above the pre-shading/mottling would look great on T'au or Aeldari and the oil weathering/chipping would look really good on anything Imperial really.