By Charlie February 25, 2019
Jeff announced he was planning a small Necromunda campaign, and so I took it as an excuse to buy a pile of Sector Mechanicus scenery. For reference, the images that follow were built from the following kits:

Jeff will also be donating his walkways, as he has no use for them. Here's everything laid out: 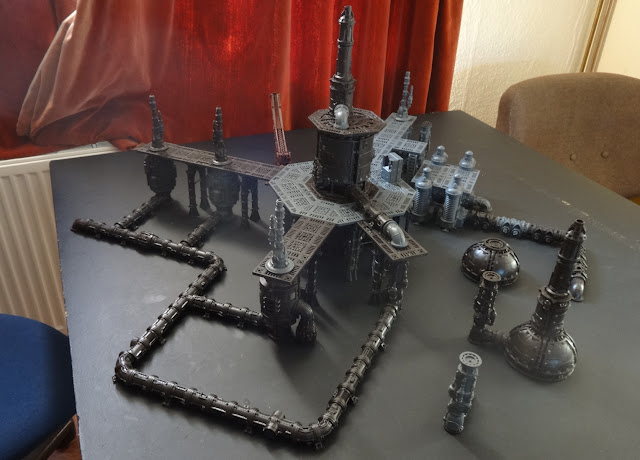 When Tom and I assembled this, we focused on flexibility. See, everything there comes apart. The kits, designed by Ray Dranfield, are astonishingly modular. Tom and I kept finding new combinations of parts that worked together during construction and were pretty much blown away as a result. The level of detail is similarly nuts. That's not to say they're perfect; I'm not wild about the design of the railings, which look more like a sci-fi picket fence, and there's also the question of cost. I've spent about £200, but saved a chunk of money with the killzone boxes. Had I not done so, it would have cost me at another £80. Even with this much stuff, it'd take a lot more to have a vertiginous 4x4 Necromunda table, so I'll be supplementing it with more cost-effective buildings and suchlike.

I think the main reason for the added expense is that cylinders, when broken up, take a lot of space on a sprue. It's why walls are such an efficient form of scenery. Clearly it's a price I was willing to pay, but now that the Sector Mechanicus Killzone has been taken off the GW webstore I don't know if this lot would be worth £280 to me. Of course, these things are all subjective... from my partner's perspective it's probably not worth one crisp fiver. (Don't worry, she accepts my love of plastic crack.)

Behold, it all comes apart: 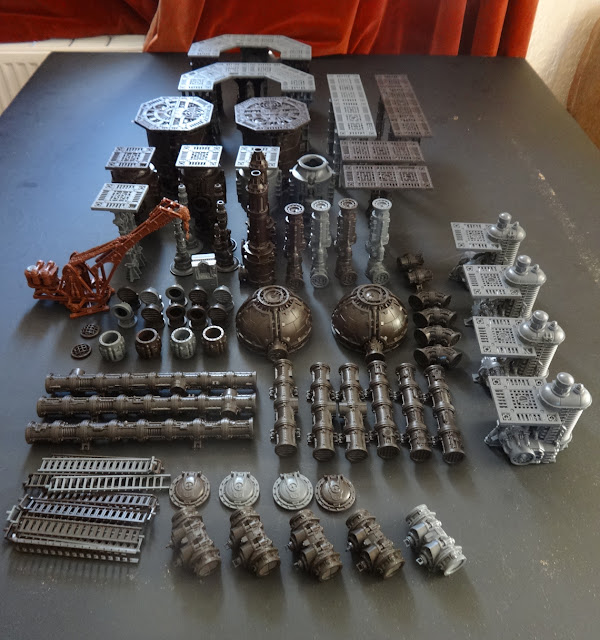 By way of demonstration, here's another quick layout: 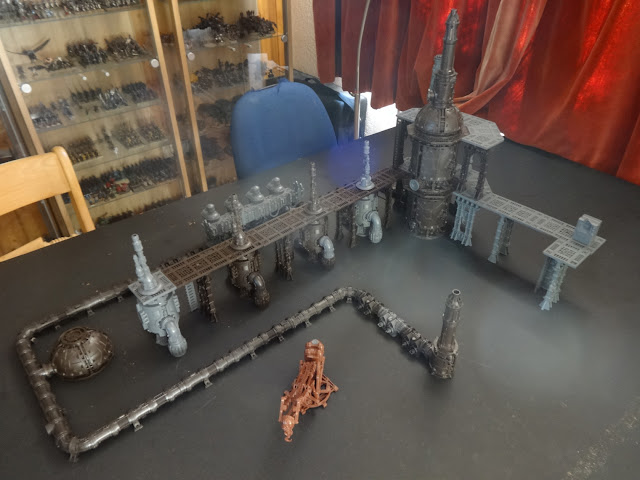 It turns out there are raised rivets atop the walkways which are specifically spaced to help locate parts placed on top, which means you can stack the terrain without having to glue it - perfect for changing up layouts from game to game, and for tidying it all away when not in use. So yes, it's pretty expensive per square foot of board covered relative to other GW kits, but it is delicious. Just... try not to think to hard about what any of these things actually are. They're clearly designed to be "generic industrial MacGuffin" rather than a particular thing. That does make their use more flexible, so I get it.

These days I don't tend to post much WIP stuff... the painting effort begins tonight. Rather than painting the whole thing as one big job lot and driving myself insane, I'll probably try and complete little chunks. Honestly this much unpainted terrain is kind of intimidating... wish me luck!