By Jeff September 03, 2019
I've waxed rhapsodic about the Genestealer Cults range a lot in my posts on the subject. I think they're wonderful. But they were just going to be NPC antagonists for roleplay scenarios until the latest models were released, and a massive determiner in pushing me to having a whole army was these guys:

The Atalan Jackels grabbed me by the throat. Realistic bikes, lovely weight distribution, fantastic quads, narrative driving stowage. They're wonderful. Oh, and I could immediately see their fighting style as it was featured in one of my favourite films of recent years: Mad Max: Fury Road (link 15+ and is the biker attack).

Deciding that I wanted more than a token unit of them I grabbed two box sets and set to making as varied a squad as possible. They're a nasty unit, especially with the stratagem that allows them to roar up their 14" move, yeet a trio of demolition charges at something and then blast the smoking remains with the pair of mining lasers on the wolfquads. 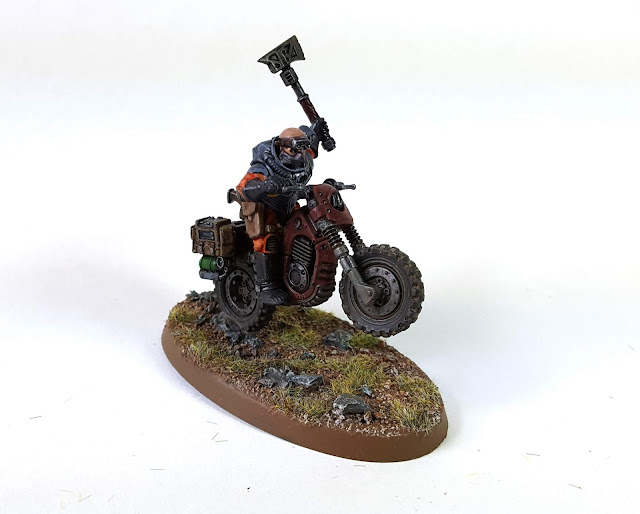 As far as the colour scheme goes I kept it straightforward. All the civilian vehicles in the army will be that "House Ortag Red" - or Vallejo Primer Red as we call it - so a mix of that and grey seemed wise. The riders were all in the standard Ortag Imperial orange jumpsuits and grey protective suits. I will say that these were a grind to paint. All cavalry and bike units seem to be but these took me a solid week of evenings to knock out 10 figures. An eternity in Jeff painting time. They're so worth it though. I love how they've ended up.

A big part of these models charm and individuality is the stowage panniers on the back of the bikes. I love how varied the kit carried is and how it looks like they are mutually supporting. I decided that for some of the weapons I would forgo the green PDF-looted look and paint them as if they were personal weapons that the Jackels carry on the job normally. Shotguns and obsolete grenade launchers to fling grapnels, flash bangs and smoke now firing frag and krak. I wanted them to look like slightly eclectic individuals even before they were tainted by xenos blood. 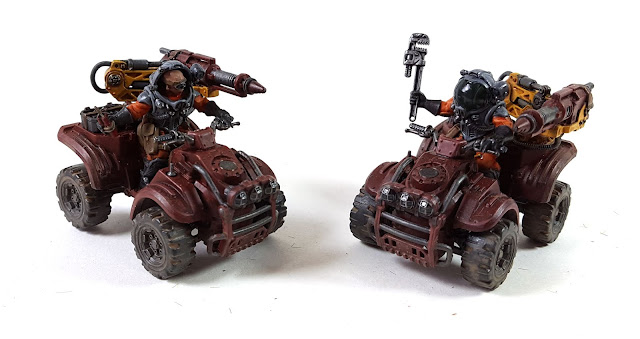 The big supportive punch comes from the Wolfquads. While I could have armed them with the excellent Atalan Incinerator, I've got a trio of forestry sentinels on the workbench that are doing that job. I wanted some hyper mobile anti-tank firepower and mining lasers are the way to go on that front. Must give a special shout out to the lovely visor for the pressure suit that all the 1st and 2nd generation types wear, gives the impression of what they should be for before a three armed alien is crammed into it. I've got a spare visor now waiting for another pressure suit to be needed. 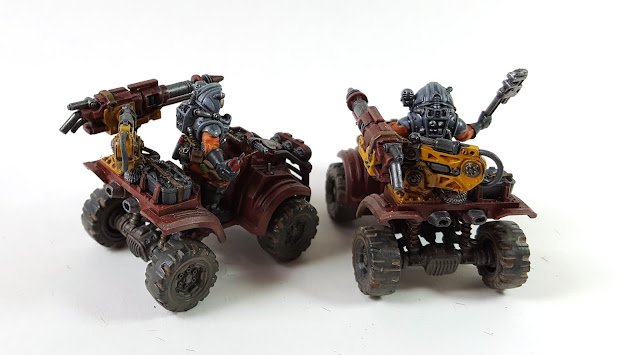 The wolfquads gave me an opportunity to put in those spots of colour that lift an army. In this case the "caution, this thing in motion" yellow of the accessory mount at the back. All my vehicles will have these elements whether in handrails or "beware" bits. It'll really sell the industrial origins of the army and prevent it looking like a military force. At least... until the brood brothers turn up... 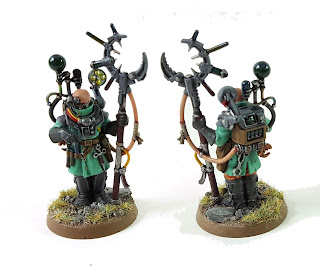 The Atalans weren't all that was on my painting station lately, the friendly neighbourhood refinery medical officer in the form of the Biophagus also rocked up. Dressed in nice clean scrubs in vile institutional mint green and sporting a wide variety of disturbing vials and surgical tubing along with his not-suspicious-at-all-oh-no-officer mancatcher full of needles... yeah, he's a bit disturbing. I love him. His alchemical familiar will be along later, I'm painting all the familiars not physically attached to a model in one batch. 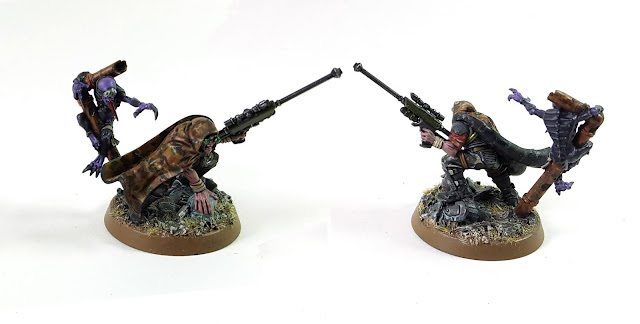 Finally we have the Sanctus. I wasn't taken with the Sanctus kit at first, at least, until I saw the sniper variant. Now that was an assassin I could get behind. I decided to go a bit crazy on his painting and paint not one, not two but three individual camo schemes. Urban camo trousers, UK-style multicam outer cloak and night-time camo reversible lining. Keeping the grey armour and having the little familiar whispering about priority targets kept the model attached to the army visually, while allowing him a vast variance in appearance with the rest.

And that's me lot for this time. I'm working on the aforementioned Sentinels and then the second - and final - batch of purestrains. Getting to the home stretch with this project. My keen has really kept up and I can see a completed army in sight. I thought it might be interesting to see my remaining plans for the cultist part of the army and how I track progress so here's the current army plan and workometer:

Lots of green on that thing :D there's some oddities like needing one broodlord and owning two but that's just the way collecting goes some times. If 155 power seems like an odd number it's because it was everything I wanted from the codex. I'm making up another 45 power with Brood Brothers in the future to give me a nice round 200. So, Sentinels soon, but before that, round two of Necromunda. Very exciting. Until then