By Maisey September 09, 2019
Em recently got very excited about doing some fantasy skirmish gaming and was looking around at building up a Frostgrave warband. Her research led her to the newly released Warcry, specifically the starter set, with it's generous pile of scenery and a feral looking warband she was intending on using as her Frostgrave warband. Since it arrived as a complete game we decided to give it a try. This would be my first real dip into the Age of Sigmar universe since they blew up the old World (it's still too soon). This is our thoughts on the game. 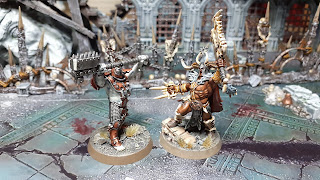 What's in the box

It's hefty, and so is the price tag. But if you break it down into 'normal' GW model costs, everything in there is really a steal (as I've discovered is usually the case with these boxed sets).

I have to be honest, the set first appealed to me because I could see the Untamed Beasts models working great with my newly purchased Frostgrave wizard (the Jaguar Boudi female shaman model from Hasslefree).  The scenery and game mat are also clearly very Frostgrave friendly, so once I'd worked this all out in my head it felt like I was getting a pretty good deal buying the whole box instead of one warband on Ebay. Ah wargamer purchasing logic...

The contents, and in particular the models, are beautiful (I'm especially in love with the mad vulture things CAWCAAAW!) and the sprue layout/design made the models really simple to cut out and put together with minimal clean up.
The one thing that seemed slightly lower budget was the quality of the rule book. I mean... it's fine. It's in colour, has a bit of lore, the rules and lots of campaign pathways for a ton of warbands but it's softback and doesn't have the polished quality that everything else in the box has. The setting of the Eight Points is very compelling. I can imagine this Mordor style wasteland with gnarly monsters around every corner and Archaons legions marching along the dusty highways to war in the other realms.

The core rules are fairly straightforward to learn.  Setting up is made interesting due to randomness of deployment, objectives and terrain layout - oh and then there is the 'twist' deck which can add another layer of random interest to the game such as +1 to all movement or 'snappy shitehawk surprise' (Raptoryx birds loose on the field). I love the 'destiny dice' mechanic that gives you random 'free' abilities to use each turn depending on the number of doubles, triples or quads you roll with your six destiny dice at the start of each round. Many of the abilities are unique to particular characters and I managed to forget to use several of these so probably need to add that to mental sequence for each activation (i.e. before touching model, FIRST CHECK if it has some awesome world ending ability to use!)
The gorgeous terrain is also not just pretty to look at. In our first game I was forced to make a dash towards an objective sat behind some nasty 10ft chaos spikes. As lady luck would have it, I failed the terrain test and ended up impaled. Good times.  The pace of the game is also good, despite it being our first game and there being a lot of rule checking and double checking, I think we were done in less than two hours.

Is it a gateway drug into AoS? Possibly... I have spent a fair bit of time eyeing up Gloomspite Gitz for a warband once I realised you could have Squigs running around eating everything. Although the standalone warbands are all delicious so there really is no need to start buying standard AoS units to have fun with Warcry.  Assuming Maisey is similarly keen I'd like to try the 'campaign path' for the Untamed Beasts.  GW has since teased an expansion book for the game which allows the introduction of Monsters and Mercenaries. Finally my poor neglected Ghorgon can stomp on people again! Hopefully not my people but.. you never know! 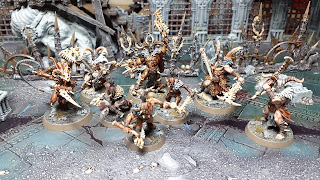 Models: The set comes with two complete war bands, the Untamed Beasts and the Iron Golem. These are really nice sculpts. Not too over the top like some chaos stuff can be, and very little to link them to the chaos of old. A few 8 pointed stars here and there but that's all. Each war band is really unique. There is virtually no customisation within the models. So there is no real way to expand, unless there is a release of reinforcements later. Each war band comes with a deck of cards covering all the stats and abilities for each of the models. That said the designers have decided to use glyphs to represent abilities and information, which can be initially confusing until you've learnt the 'language'.

Scenery: This is the main reason Em picked up the boxed set. The Terrain is very lovely. The buildings are nicely detailed and very neutral looking. There is a very little that make them specific to Age of Sigmar. We've used them for Warcry, 40k, Killteam, and we are fully intending to use it for Frostgrave. The collapsed head sytlings would probably make them suitable for any Lord of the Rings/Hobbit based gaming as well. One thing to be very careful with, due to the way that the terrain is setup during games (more on that in a bit) that there some specific ways to assemble the buildings that are not obvious in the instructions. There are a few resources online covering which bits to stick together or not. 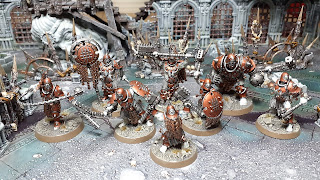 Game Play: Setup for games is done using several decks of cards. There is a deck for terrain layout (hence the need for the scenery to be built in a specific way), a deck for deployment, a deck for the mission, and a deck for the twist (more on this in a moment). The deployment is dictated by the cards. the players need to split their war bands into three groups, Dagger, Shield, and Hammer. The deployment card states where each group is deployed and at what turn they arrive. The Twist cards introduce a little something something to each mission. These range from something simple to a stats increase to random lighting strikes to wild creature attacks.

The core rules are very straight forward. They are so basic that we spent a lot of time looking for rules that just are not there. I guess we're too used to other game systems and more complex rulesets. This makes it simple to pick up if you are new to war gaming, but lacking a little depth for experienced war gamers. The most complex mechanic is the how initiative is calculated. This involves rolling 6 dice, with the ability to add more through twists etc, and this roll determines who has priority and what extra abilities you get to activate during the turn. If you roll a lot of singles (so a result that is unique), then you have priority. If you roll doubles, or triples or more, you gain access to high level abilities that you can access during the game. Some of these abilities are open to any model, some are specific to characters etc.

The other big difference is that the attack roll has been boiled down to just 1 dice roll with the targets armour being accounted for in the models toughness. All the weapons also have two damage profiles, one standard and one critical. A roll of a 6 is always a critical. This results in lots of damage being dealt, but all models have a large number of hit points. Even so, a heavy hitter can take out a basic model in a single round (unless you are me and roll like a brick).

The core skirmish, with it's slim core rules feels like it might get repetitive quickly, but with the huge decks of cards, with more being released with the scenery sets, keeping everything random there could be a lot of life in it. Also in the book, which takes up the majority of the pages, is a collection of campaigns and the mechanics for more narrative play. There are a fixed set of campaigns in the book as well as the templates for creating your own. There will be further campaigns and scenarios released in the future in expansions or white dwarf. 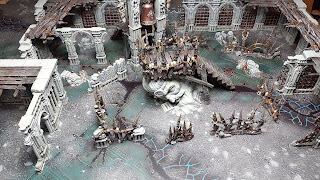 Overall: I think it's a fun little game that should be easy to pick up and probably works best for a gaming group who are after a neatly packaged campaign system for a quick skirmish. Once you've got the rules down it should be easy to bash through a couple of games in an evening, or the majority of a campaign in a weekend. This is due to the minimal messing about that comes from the way the game is set up. You don't need to waste time thinking about the scenery, or objectives, or even deployment. It's all done for you letting you get on with the game it's self and enjoying the narrative of the game, as opposed to the mechanics of the game. This may not suit everyone, especially if you like the creative freedom and get your enjoyment from forging your own path. Others may simply enjoy walking the path that others have laid down. Even if that path has weird chaos beasts jumping out at them every so often.