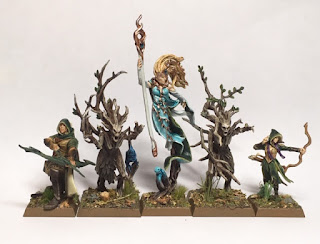 Roughly *some* years ago now plans were announced for a new Beard Bunker fantasy campaign to be set in a brand new location, namely the Border Princes. As I already had a ginormous Chaos/Beastmen army I decided to dip my toe into something completely different and got hold of a Wood Elves codex.

My Chaos army was a little slap dash painting wise so for these dainty little pixies I decided to try and slow myself down a bit and spend more time on details.  I started out with some Mirkwood Rangers from the Games Workshop Middle Earth range. Yes I know the scale police should probably lock me up for this heinous crime but, to be honest, it doesn't bother me how petite they are compared to the other Elves. As they are a scouting unit, being small and lithe kinda makes sense and they'll usually be out of the way of the main army bulk. Also the sculpts are JUST SO PRETTY I couldn't leave them out of my wood elf army once I'd clapped eyes on them.  I spent a long time on the greens on these guys, using a few Duncan recipes along the way, but they really came together once I'd done the 'throw forest stuff at it' basing.

Next came a unit of Dryads a.k.a. my Meantwigs - blissfully easy to paint compared to the elves. 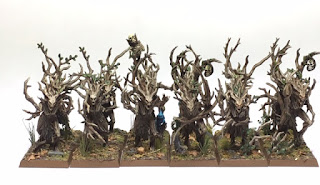 The third unit I put together was the Glade Guard. The old Glade Guard box was still available at the time but those god-awful heads just put me off completely.  I decided instead to do a head swap and use the Sisters of Avelorn with the Wildwood Ranger heads popped onto them. I was a little worried my block of archers would end up looking like wonder woman clones but once painted up in muted foresty colours they came out ok. 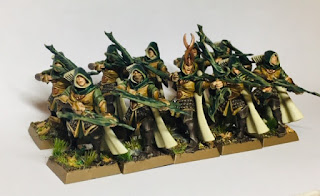 Lastly I got myself a fancy, gravity defying Spellsinger to lead my small army into battle. This is Ithronel. The paint scheme is 100% borrowed from Duncan's 'How to Paint Alarielle' video on youtube and I a pretty happy with her as a centre piece for the army. 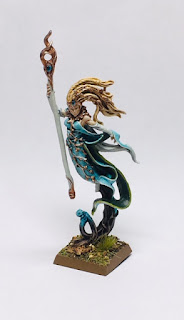 These models were finished roughly two years ago now, and have spent most of their lives languishing in the loft or the back of a cupboard. BUT the Border Princes campaign has recently been resurrected (hoorah!) and is scheduled to start in November 2019. I'm currently painting a Glade Rider unit to boost my points total up to 750. After that there are more ponies, archers, Eternal Guard and Sisters of the Thorn waiting in the wings, as well as some delightfully '80s Wardancers.

I'm looking forward to seeing how they do on the table but I honestly have no idea what I'm doing with a fast cavalry army (any tips welcome!)  I imagine it will be a steep learning curve so expect tales of wanton deforestation in the near future...