By Charlie April 13, 2020
In the extremely blue corner, weighing in at over thirty tons, the Megachonker himself, Gaius Atalus (deceased)! He's only got one hand but don't let that fool you, he's a 4th dan black belt in Fiddlercrabnojutsu. 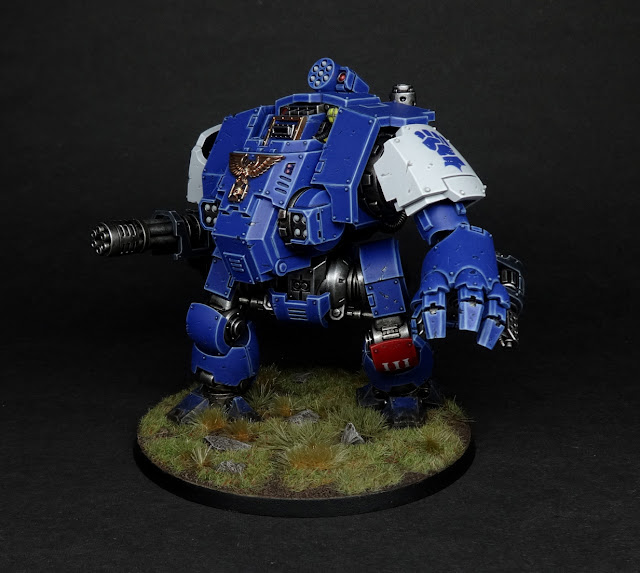 
Everything here follows the general ideas outlined in my tutorials on freehand painting and freehand lettering, but you needn't have read those for the following to make sense. The process can be summarised thus:


Unless you're drawing a simple geometric shape, you need some reference. Even if you think you don't. Despite having an army of dudes with little fists on their shoulders, I still looked up some reference because I was painting a 2D design, which is different to the 3D moulded shoulder pads. Also I looked up reference for laurels to get ideas about different formats (the full circle? The ribbon tie? I wouldn't have thought to go for the bracket style had I skipped this step).


Historically I did this with dots of paint, but Maisey mentioned using pencils for this and I immediately recognised the extent to which yes. At least, yes on a light background. Good faff reduction.

Below you can see where I've drawn the outline of the fist icon (if you aren't a regular reader, the Cobalt Scions are an Ultramarines successor chapter and the fist symbolises the Gauntlets of Ultramar). 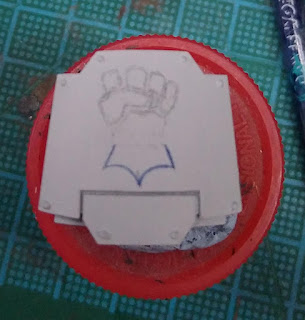 In the image below you can see I wasn't as detailed in blocking out the laurels, I was just focused on the overall location and proportions of the design. I probably should've blocked out the leaves more as it would've saved some pratting about later. I didn't block out the numerals since they're simple enough - I just tried to make sure they were centrally placed. 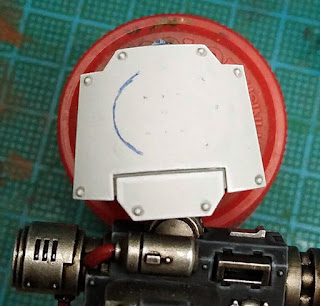 
This is where you start sketching with paint. Get the general shapes in; don't worry about being tidy. That comes later. As you can see in the image below, I seem to have been filling in the laurel leaves in a completely random order like a prize knob head. 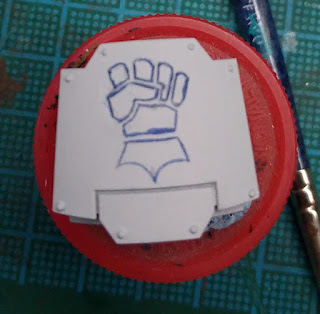 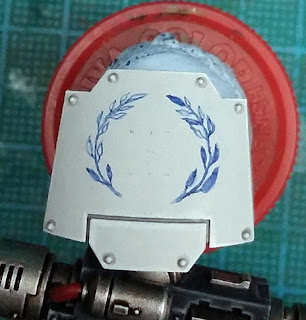 IV: Colour it in until it doesn't look like flying hippo crap. 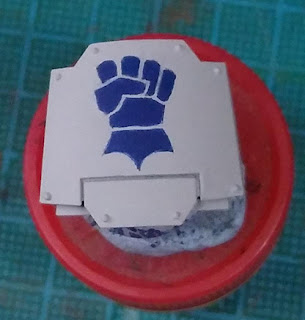 Go back over what you've done with #twothincoats so it gets some good solid colour on it. Tidy it up by using the background colour. Expect to keep switching between your design colour and your background colour, since certain angles and shapes are easier to achieve this way. Look at how the III gets done to see what I mean: 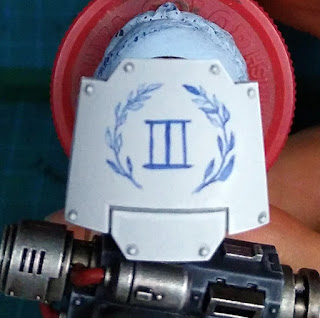 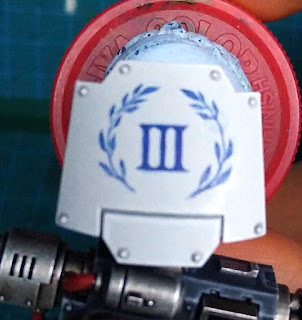 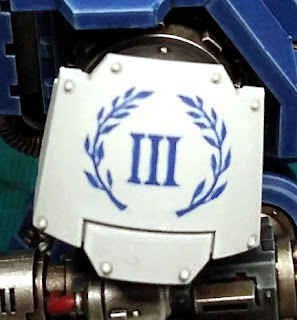 Most of the work got done by putting some blue down and straightening things out with the white when I slipped. Note how right until the end the numerals are joined together, then I painted the thin white lines in to divide them. Much easier than trying to paint an ultra-sharp right angle with the blue.

Note also that I re-positioned (i.e. repainted) a couple of leaves at the bottom right before moving on to the final weathering stage, because it's fine to go back and fix a mistake you didn't spot at the time.

Since Sir Chunks was getting dings and scrapes applied over the whole model, it would've looked pretty weird if the freehand escaped similar harm, so I threw in some extra scrapes over the top, at which point... job done. 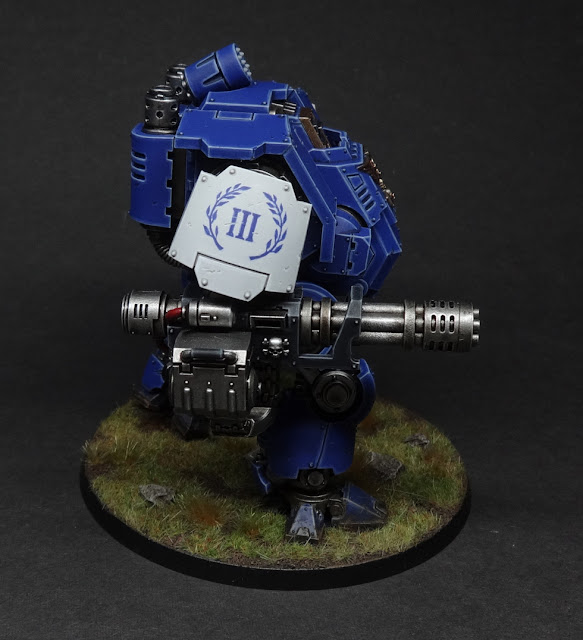 It turns out the arms retain their full range of motion after assembly, as do the boob guns. It's also worth noting the legs are very amenable to whatever pose you want, as the pistons are separate components and cleverly designed to work in a range of motion rather than one pose (unlike some kits I could mention).

Sadly for me the left shoulder's vertical joint and the elbow joint weren't stiff enough to keep it up (hur hur) so I glued it in place. The shoulder's rotational joint and the wrist joint were fine, though, and can still move fine after painting. Similarly the right shoulder has vertical and rotational movement, as well as elbow movement. This is almost completely pointless, of course, but is charming nonetheless, and much like tank turrets, will inevitably get poked into cinematic positions during games.

Here are some examples:

Given the current rules regarding space marines and bolt weapons, storm bolters are both more effective than the grenade launchers (better range, more shots on average, a reliable number of shots) and half the points, it's hard to make the case for the grenade launchers, but bear with me.

The only context in which this dreadnought will be better off firing party favours out of his nipples is when he's not in the tactical doctrine and the enemy happens to be 13-18" away. In rules terms, at least. My main reason for choosing grenades is because chest guns just don't make that much sense to me, whereas having the ability to pop grenades as an emergency measure when getting swamped makes cinematic sense. If you're a walking tank, you don't have to worry about shrapnel going everywhere.

I'm also of the opinion that you'll get more mileage out of having a gatling cannon attached to the left arm rather than a heavy flamer. Since I primarily intend to use the big gatling cannon, though, it just seems like a repeat. Having a heavy flamer does offer some advantage in overwatch, but my main motivation was that in-fiction it's another tool at the pilot's disposal, since he can use it to flush people out of cover. Do the rules reward this? No, but I don't care. I want my brightly coloured bipedal death robots to make sense, dammit!

The pilot: how he done died

Since I posted the bulk of the Cobalt Scions' background in my post on Captain Lucullus I'm not going to try not to repeat myself too much. Feel free to go back and read that massive slab of lore. Go on, I'll wait. No? Okay fine I'll try and keep this post somewhat self-contained.

Gaius Atalus was the first batch-produced primaris marine who truly earned the respect of the four Ultramarines who crossed the Rubicon Primaris to found the chapter.

Being a native of Magna Macragge Civitas helped, but it was his adaptability that got him noticed by Martellus Lucullus of the Third during the Siege of Adrantis VII. Lucullus had Atalus moved from the reserve companies and into the Third, where he took him under his wing. Atalus was a quick study whose good humour only seemed to increase in a crisis. If anything he was a little too sure of himself, but seemed to have the skill to back it up.

He became the first Cobalt Scion to be promoted into the rank of Lieutenant, rather than simply having the position thanks to Cawl's programming. Chapter Master Drusus agreed, at Lucullus' suggestion, that Atalus would be first in line should one of the chapter's captains fall in combat. To ensure Atalus would do well in command, Lucullus regularly had him take control of operations and would watch his pupil, only offering suggestions if he considered that Atalus was making a dangerous mistake.

Sadly it was during one such operation that everything went disastrously wrong.

The Liberation of Pleione Secundus was a long and gruelling fight against ork invaders. Atalus had hastily arranged the defence of Numis City's commercia district, but had missed one possible point of ingress. Lucullus was briefly called away to liaise with other Imperial forces, and whilst he was gone, a large group of orks broke through the gap. Atalus took full responsibility and judged that a full squad of brothers would be lost unless a withdrawal was facilitated. He stormed into the breach and sacrificed himself to cover the withdrawal. Lucullus assumed operational control and led a counterattack to drive the orks back. By the time the Scions recovered Atalus, his second heart was failing.

His loss was mourned, as everyone sensed he had been destined for greatness. He was interred in the chapter's first suit of Dreadnought armour, and given his close relationship with Lucullus, was assigned to the Third. While this does allow Lucullus to maintain his friendship with his old pupil, it also means dealing with Atalus' increasingly... problematic traits.

Having been told he was destined for big things, and then being told he can't have them because apparently you can't just leave dreadnoughts switched on the whole time, has made Atalus increasingly bitter. He doesn't fully understand why he has to be put to sleep so much of the time, and seems slower to learn than he once was. If anything, he seems to be regressing.

Lucullus finds it hard to see his friend slipping away, but he and the chaplains have been unsuccessful in keeping Atalus' spirits up. Some have suggested it would be easier on Lucullus if Atalus was assigned to a different company, but Lucullus thinks himself in the best position to help, even if the process brings him sadness.

Atalus sometimes gets confused or disoriented in firefights, particularly when engaging orks, and has been known to start issuing orders or formulating incomplete plans. The marines of the Third have learned to ignore these edicts, and will joke with Atalus that he's forgotten his place. Atalus will vox back with self-deprecating quips, but Lucullus knows this is a front and tries to employ his friend's suggestions where they're helpful so that Atalus doesn't feel entirely foolish.

Given enough time, it is hoped that Atalus will adapt to his new reality. Perhaps then, something of Lucullus' first and greatest protege will remain.

That's it for today. You'd think I'd have had enough of painting marines after all these months, but as usual, finishing something has left me juiced to maintain the momentum, and besides, there's only five intercessors left in the battleforce box. That right there is a shiny shiny milestone. For now, here's a family photo: 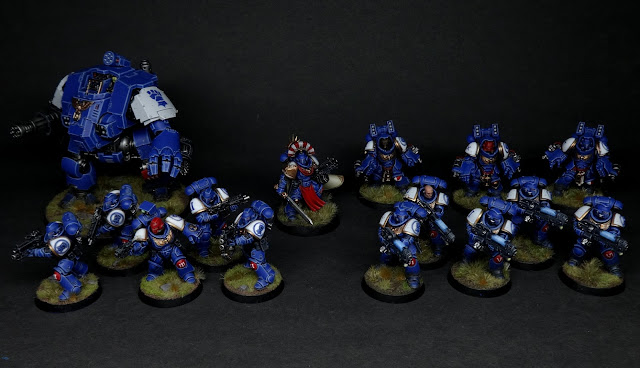