Do You Wanna Be In Our Gang? - Necromunda Orlocks

By Jeff April 06, 2020
Greetings fellow bunker dwellers! It has been a long time since we last delved into the hellscape of the Underhive. Perhaps too long... because in our absence the Blood & Chrome have been expanding:

Yep! That's a whole platoon of Orlocks right there. 30 Fine fellows and one slightly cyborged one. Rest assured, these are not all in my actual day-to-day gang. Instead I assume that this is the entire clientele of the Blood & Chrome Social Club and those willing to sack up and fight should the occasion demand. Although yes, I am entertaining fantasies of having the entire MC chapter attacked by the Magistratum some time... Now some of these have been seen before, but I'll just photograph them in small squads and let you feast your eyes on the whole kit and kaboodle.


We start with the guys that, had I produced too many more of, might have been considered a war crime! The combat shotguns of the Orlocks have become one of the terror weapons of the campaign along with the Cawdor flames and bomb rats. These lads are all about the mid to close range firefight and do terrible things to people. Vadim there is sporting the first of numerous head swaps I bought from the excellent Puppetswar the African heads, Cossack heads, and Mohawk heads. From Anvil Industry I got the Long Hair heads and the amazingly named: Tactical Beards. If I'm honest, I prefer the Puppetswar heads. Their expressions are superb.

Medium range firepower comes courtesy of these six gents. All with either autoguns, boltguns or the terrifying bolter/melta combi-weapon. I presume Dolf is the safe cracker and door-removal device. You'll see more of the brightly coloured mohawks by the way. Patrick finally has some raver friends. Oh, and doesn't Carsten look like a right git?

Then we have three pyromanic amigos. I wanted the Blood & Chrome to have fairly themed weaponry. They're supposed to be the House of Iron after all. So solid rounds and prometheum (from the fuel tanks) seemed to be the win. I left out the plasma and similar weapons that the Forgeworld upgrades came with. I think it's fair to say that both Happy and Birzim enjoy their work but recently-released-from-lockup "Happy" Acciaio is positively concerning in his intensity.

For those who just love to mix it up close and personal, you can't beat these chaps. I like to think of most of them just getting people on the deck and then Bijar comes up with his massive mallet of whacking and finishes them off. Plus don't you just love Josef's face with that Genestealer Cult crowbar?

Some of the "steadier" members of the gang are trusted to handle the heavy support. I can't wait to get that heavy stubber and grenade launcher working on the above ground games. We're a bit tunnel focused in our competance as a gang for now.


Recruitment is key for any gang and the Blood & Chrome have their fair share of up and coming juves. Oh, and yes, that is a Spindly the Spider Candlemas jumper that Severi is wearing. His mum insists on him dressing warm.

Now, yes, I hear you, "those juves can't have those weapons"... you are correct. But there's only so many models. I'm assuming that the posers with the bolt pistol and hand flamer bought an expensive gun and couldn't afford good ammo, so they're using a converter kit to fire autopistol ammo through the bolt pistol and lighter fluid in the hand flamer which has an effect remarkably similar to a stubber. Until they are allowed to start affording the real stuff. Imagine a sad trombone sound every time they fire their overpriced toys. 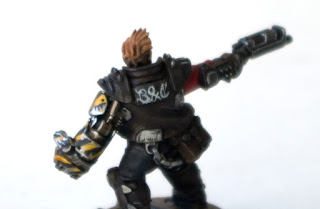 I'm really loving how the gang hangs together. For all their riot of different garb, the unifying black leather "cut" and the blood red tabards give a nice sense of belonging. Oh, and you'll just have to trust me that Every Single One has the B&C blackletter gothic on their cuts. I tried to get a shot of all 30 but.... It's kinda hard. What's that? I've forgotten someone? From the first photo? Perhaps the most interesting one? Oh all right, say hello to Great Uncle Clanky. 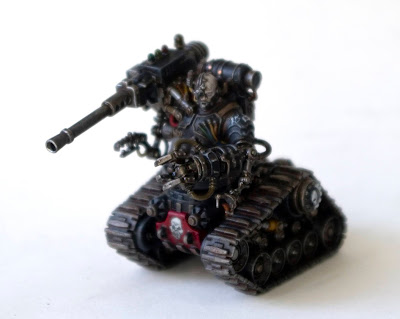 The minute I read that Orlocks could have weapon servitors I knew, I just knew I'd be making one out of one of these AdMech lads. Great Uncle Clanky was once an actual member of the gang sentenced to be servitorised for some crime or other, no-one living remembers. What is known is that once converted, the gang busted him out and hid him away under a storage shed in the Social Club. Over time they retrofitted him with a big ol' heavy stubber and made sure the feeding reservoirs were topped up with gruel. Trouble is, he's kinda expensive to run. Uses a lot of fuel and bullets. So he's only busted out when real trouble hits. Say when a whole bunch of gangs start fighting nearby. Buah, ha, ha and if I may, ha...

The model was obviously lightly converted with a heavy stubber from an imperial guard tank accessory sprue. I also added some of the extra spindly manipulator arms to give him more character. Painting wise, I wanted to emulate the gang, hence the red strike plate with a chrome skull painted on to match the belt buckles. The B&C on the gun and the shoulder pad and the black everywhere else. Had a lot of fun with Great Uncle Clanky. Can't wait to inflict him on everyone. 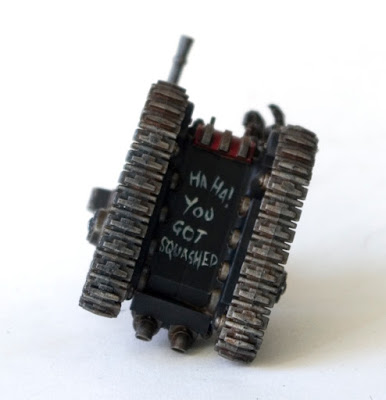 Oh yeah, almost forgot, the Juves got at him and painted an insulting message underneath for anyone run over...

Now technically I am done with Orlocks. While I'm still playing them in the current campaign I'm certainly moving on for my next Necromunda painting project. The Goliath gang The Ogres Of Death Metal need to happen after all and I am enough of an obsessive that I have ideas for all the gangs. That being said: I will absolutely return to these when the inevitable House of Iron book comes out because hopefully that will mean some new Orlock lads, some cyber mastiffs and maybe, just maybe some sodding Orlock women! Please? Looking your way G-Dubs... Until then, stay safe and