Allow me to indroduce the Ikarran Dynasty, my fledgling Crusade force which will combine my old Necron army from days-of-yore, and all the lovely newness of 9th Edition.  For anyone who wishes to get ahead of the posts, a lot of the flavour text you'll read here can be found on the Cetus wiki.

The names the Ikarran Necrontyr used for the worlds of the Eridani Sector have been lost in time. Needless to say, both Eridani and Achenar Sector were once part of their dominion.

In an age when dinosaurs still roamed Terra, and humanity's ancestors were but tiny vermin desperately trying to avoid becoming the next meal, the Ikarran dynasty was at its peak. Victors of sorts of the War in Heaven, and vanquishers of the C'Tan, they along with the other dynasties were masters of the Galaxy. Seeing little more to achieve, they realised their lives would no longer have purpose. Withdrawing to their birth worlds, they erected defences as they went so that they could remain undisturbed until another worthy foe had arisen. Little did they know how long they would slumber... 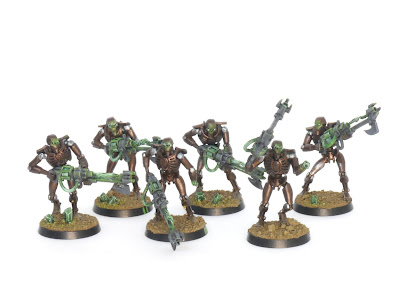 While they may once have been sentient beings with a will of their own, now the majority of the Necrontyr are simple automatons. Tricked by the C’Tan and their Lords into the process of transference, their will and autonomy stripped away to produce more pliant and amenable units, it is perhaps a blessing that the Legion have little remaining awareness of their situation.

This of course is merely a sample of my warriors (there's 40-50 in total at last count before I add in the Indomitus models).

As with many, I was never keen on the green plastic rods so you'll find that throughout the army every one has been replaced with twisted electrical wire painted up to represent the energy contained within the gauss weapons.  These warriors also have a few little conversions to show damage being repaired using the same techniques. 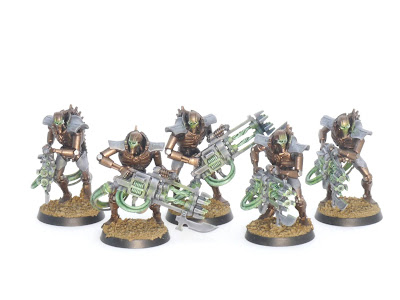 Naively you could think that the greater capacity of the Immortal frame would be an improvement on the effectively mindless Warrior. In reality it simply leaves these units with more awareness of what they have lost during transference, how much they are simply thralls of their Lord's will. 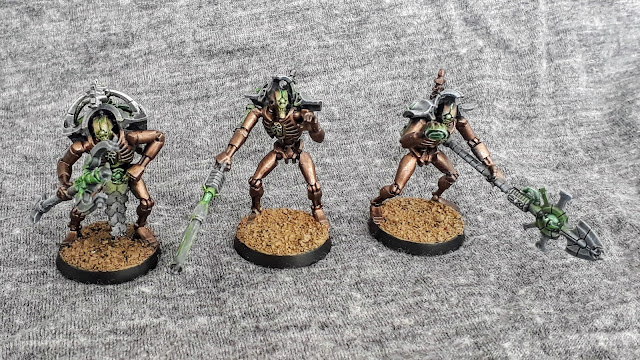 Devotees of the Canoptek Cult, these units act as a bridge to the technological constructs that maintain the crypts and chassis of the Necrontyr.  Adapted to better interface with Canoptek, these tools can bolster the main units of the Necrontyr army in battle and ensure maximum effectiveness of the fighting units.

I built these Crypteks back when there weren't even models for them so they are an amalgam of parts from the warrior kit and various other sets to give them an even more technological appearance.  Back when I was creating these Crypteks had differing abilities based on which cult they belonged to so the one on the left for example was able to teleport around on the board and I imagined the glowing button on his belt was the activation switch for this ability.

I hope this has wetted your apetite for more of these.  You'll be getting to see plenty more as I resurrect and add to this force.  You'll get to see some of my other attempts to avoid the dreaded "innanimate green plastic rods" and of course the gorgeous new kits that have been released with Indomitus.

That's it for now, but remember, We'll Be Back!