By Charlie August 03, 2020
Today's post is the second of three linked short stories. It follows on directly from the end of part one, The Battle of Hasmides, this time from the perspective of an Inquisition soldier. It's one of those times when the Inquisition has a chance to capture an extremely valuable enemy, so long as they move quickly and take horrifying risks.
This week's story assumes familiarity with the 40K mythos, but it's not essential to have read the first story. Enjoy! 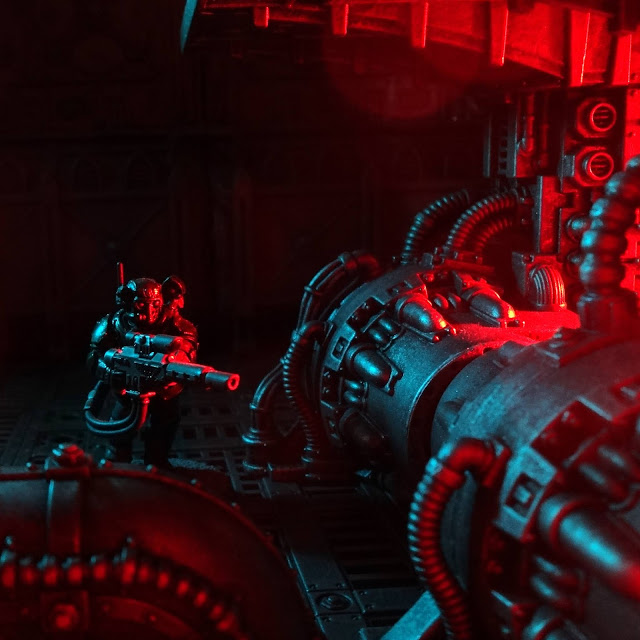 Inquisition storm trooper Ingvar Almstedt felt a rare pang of nostalgia for Stohlbard. For home. He was sitting in the red-lit passenger compartment of a Valkyrie assault carrier, but he envisioned rain lashing pines; the smell of needles on the forest floor; people sitting around coil heaters, laughing and telling the stories of dead loved ones to keep their ghosts nearby. No one back on Stohlbard would ever hear his story. He was on the other side of the galaxy now, and everything he did was a secret. For his family, his story simply ended with ‘he left twenty years ago.’
All that remained of home were the men in this stupid Valkyrie flying a hundred stupid miles through a vacuum it wasn't designed to fly in so they could get shot up by… best not to think about that until there was no time to think. Better to think about something else. A third equipment check, maybe. Why not? Hellgun power feed… fine. HUD fine. Carapace attachments on tight. Sidearm still there and safety still on, of course. Grenades all present and correct. How about the squad radio? ‘Comms check,’ he voxed. ‘Clear?'
‘Clear as the space between your ears,' Jens said. From their shaking shoulders Ingvar could tell some of the others in the cabin were laughing, even though it wasn't that funny. He laughed along, joining in with the group decision to seem merry in the face of probable imminent death.
‘Poor Ingvar is afraid,’ Tørben said.
‘It's true,' Ingvar said. ‘What if I never spend another night with your mother?'
Laughing,  Tørben replied, ‘I forgot you're only attracted to the old and infirm.'
‘You've got me mixed up with Søren.’
Everyone knew how Søren would respond; at this point it was essentially muscle memory. ‘Fuck you.’ And there it was.
Now the squad's laughter was genuine.
‘Are those the only two words you know?’ Ingvar asked.
‘Fuck you,’ Søren repeated, as if casually batting another ball aside.
More mirth.
Ingvar's HUD brought up a notification: thirty seconds to arrival. That probably didn’t mean thirty seconds until contact, that meant thirty seconds until they boarded the Dammerung, assessed the situation, and improvised a plan.
The Valkyrie was swallowed by the Dammerung's aft shuttle bay, and Ingvar felt the battleship's artificial gravity pull him down into his seat. It was a welcome sensation.
Out in the shuttle bay, Interrogator Ashar Lear and the other agents were disembarking from their Valkyrie. Normally the young Interrogator looked every bit the traditional Progenium schooled Inquisitor-in-waiting, all leather coat, jackboots and brocaded tunic; an ostentatious outfit rather at odds with her plain looks. Today, however, she was covered in carapace armour, as were almost all the rest, including the normally glamorous Nadiya Zelenko. Only Sera Jentiva, the assassin, insisted on wearing her signature armoured bodyglove, while Sister Airi had no need of carapace given her Sororitas power armour.
Ashar was talking to a pale-faced naval officer over the dying whine of the Valkyries' engines. Ingvar vaguely wondered if the officer was pale out of fear, or because he was void-born.
Given the relative calm of this shuttle bay Ingvar found it strange to think that he now stood on a battleship that had been boarded on both flanks, and by just about the most dangerous enemies he had faced in all his years with the Inquisition: Heretic Astartes.
They were here to take an officer of the XVII Legion. A Word Bearer.
Alive.
Ingvar reassured himself that if they'd survived the daemon engine on Samalut IX, they could survive this.
They moved towards the bridge, down broad corridors lined with pseudomarble busts of long-dead navy heroes. Nervous looking navy armsmen crouched behind the statues' plinths, shotguns braced, as if the enemy might spontaneously appear out of nowhere.
In fairness, with this particular enemy, that wasn't out of the question.
The bridge itself was protected by a full platoon of Navy storm troopers. Ingvar imagined they were sorely needed elsewhere. He followed Interrogator Lear and the others into the bridge proper, and immediately the battle went from being a remote abstraction to a very tangible situation. Right there, out of the bridge window, a barge of cyclopean proportions was crushed up against the port side of the Dammerung's hull. Off to starboard a smaller cruiser, still kilometres long, sat in the void.
An advantage of wearing a closed helm was that no one could see his jaw slacken. Just looking at the vessels gave him something akin to vertigo.
Ashar and the other agents gathered in the strategium behind the bridge. Ingvar and the others quietly listened in. The Admiral, Ortano, brought up a floating wireframe projection of the Dammerung on the strategium's hololathe, and a strategium support officer - alarmingly young to Ingvar's eyes - highlighted those areas where it was believed there were groups of Astartes.
It seemed the enemy’s focus was on disabling the Dammerung’s weapons, which would allow the Word Bearers’ barge and cruiser to fly away without the risk of being crippled. This wasn’t a boarding action intended to capture the ship; even Astartes warriors would need hours to capture an eleven kilometer starship, and with the rest of Battlefleet Achernar coming about as fast as they could, the Word Bearers didn’t have that long. This was a hit and run attack; a boarding action made by way of escape.
With the Navy officers having given them what scant information they had, the Ordos agents’ first order of business was to choose a viable target. 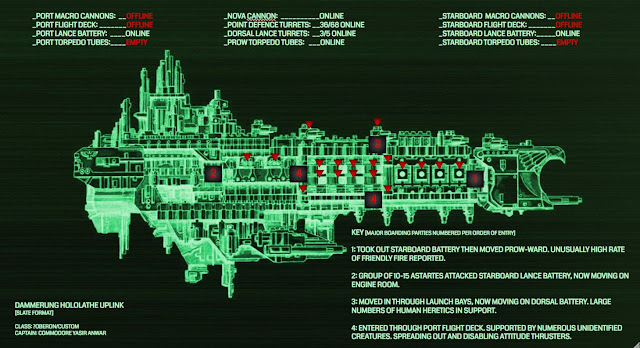