They're not just in the jungle... 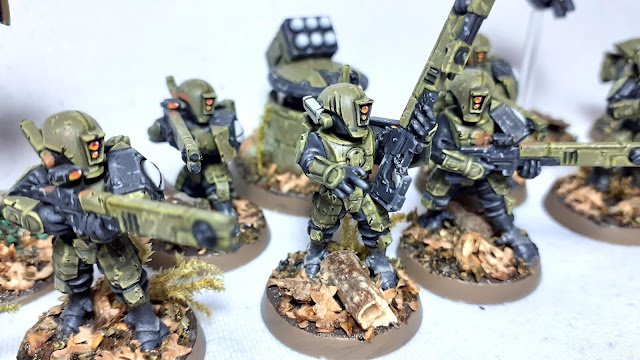 In a somewhat Stark contrast to Andy's take on the Tau, my vision of them is rather more utilitarian. I've gone for a very simple scheme indicative of the industrial war machinery of another regime that also believed in the Greater Good*. To add a layer of interest, and because I seem to always want to over compliate everything, I have pushed the boat out with the weathering and basing on these guys.

The main paint scheme is drab green and black. The Green starts with Death World Forest, then a wash/pin wash** of Athonian Camo Shade***, Elysian Green, then finally Ogryn Camo. The Black was Corvus Black everywhere but the deepest of recesses where I left the Choas Black undercoat showing, then highlighted with Eshin Grey and Dawnstone. 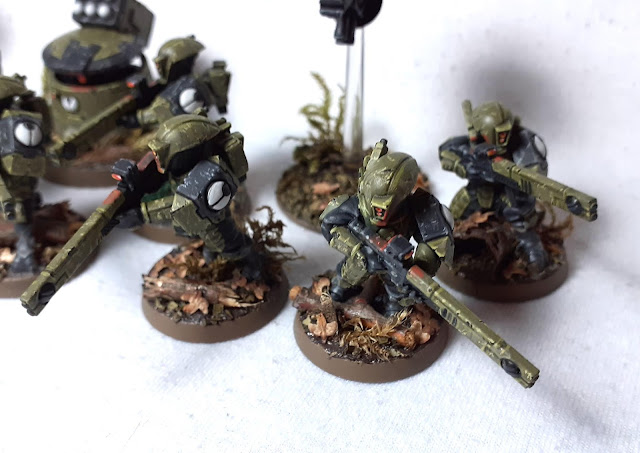 Next up was the weathing stage. This was achived by taking a very light colour and a very small brush and gently building up the chipping with tiny dots and stratches. This is time consuming and probably could be done with a sponge but I prefer the brush because I am a bit of a control freak. Then the largest and deepest of stratches gets a line or dot of black in them to show material under the paint. Once chipped there was a very gentle dust wash and several layers of mud around the ground contact points. 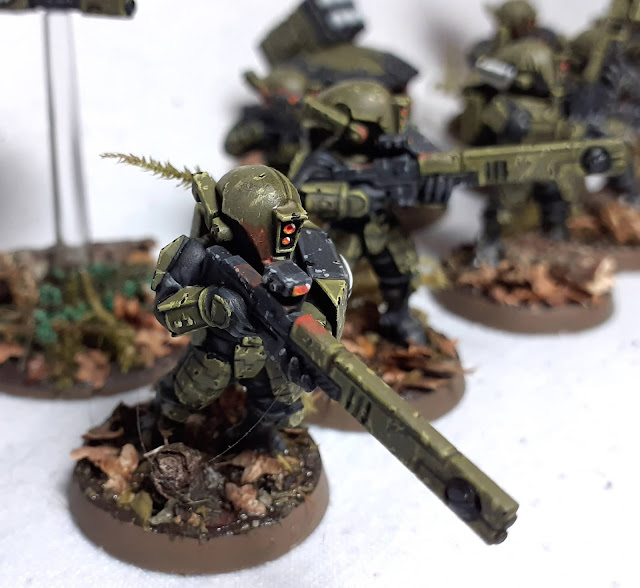 To finish up the painting I did the lens with a nice orange glowy effect, just for that hint of sci-fi in an otherwise very down to earth scheme. 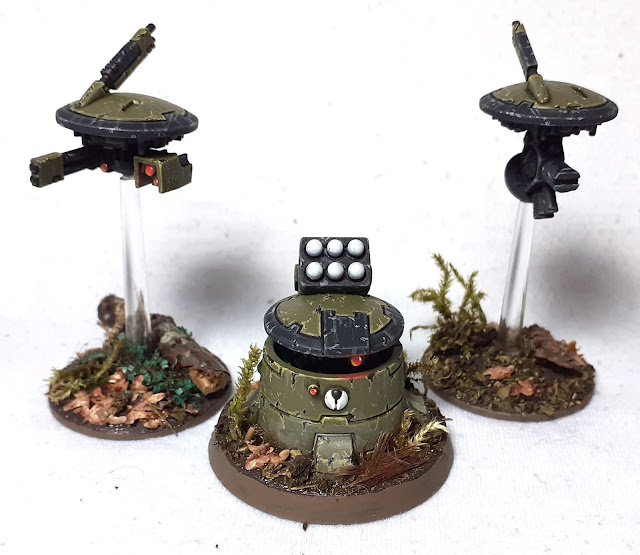 Now basing. Normally basing is where I get lazy. Not this time! I've gone for the full on woodland basing scheme that I stole from Em's Wood Elves and used on my Blood Raven's. Start with a layer of Stirland mud, with some Vallejo Thick Mud (European) stippled over****. Then I took Ivy from Army Painter, Dead Leaf Litter from Green Stuff World, Green Tea from a tea bag, moss from the garden, and bits of stick I found whilst walking the dog. All these ingredients are then thrown at the base which I have covered in PVA, then they get drowned in watered down PVA to seal it in. The upside to all this PVA it leaves the base with a gentle shine that just makes it look moist*****. 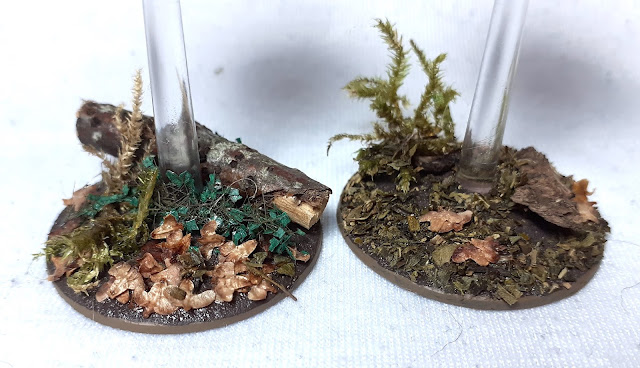 I actually really enjoyed painting these guys as it focused on the weathering side of things which I do really enjoy and less on other aspects of painting that I find tedious. So this project is playing to my strengths and interests more. I think with my last few projects I've been trying to push myself into area's that I find more difficult (layering organics for example) and whilst there is merit to that, it kinda sucked the joy out of painting a bit. This is supposed to be fun, so I am going to let myself focus on what I find fun. I really want to try this scheme on a larger battlesuit. 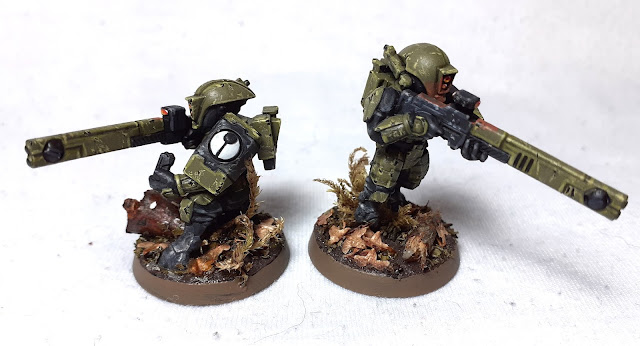 So what is next for my fledging hunter cadre? Well, interestingly I don't have a plan this time. Or at least not what I would refer to as a plan. I'm not ordering the next unit until the current one is finished. I don't want a pile of unpainted plastic staring at what is left of my soul making me feel bad. So it's going to be one in one out. I'm also just going to be doing what I am actually interested in doing. Which, thankfully, is most of the Tau range with exception to a few of the character models. I'm just going to do whatever the winds of whimsey take me once a unit is done. If I feel like doing a vehicle next, I will. if I feel like I need more troops, then that is what is next. What I actually have sat on my desk right now is a XV25 Stealth Team. Because I wanted to paint those. So that is what I am doing.

* In which some participants were greater than others.

*** Which in my head always gets called Athenian Camo Shade (careful Maisey, your education is showing).

**** Of which I am totally going to skip next time as it simply doesn't show on the smaller models.

*****HAHAHAAHAAH ONE OF THE FORBIDDEN WORDS!!!!