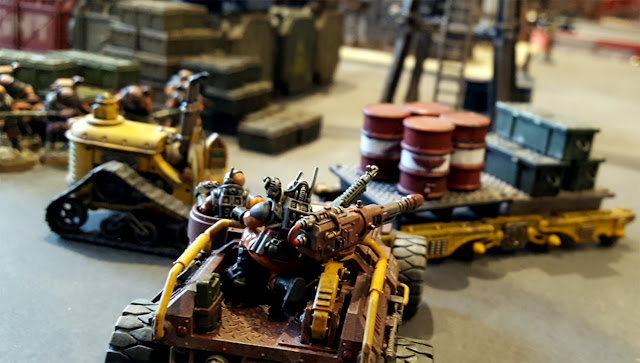 Since 40K's ninth edition dropped I have been yearning for a full weekend of playing Crusade games with my mates. Was it worth the wait? Yes. Just being surrounded by friends doing the hobby we love was great. I should probably caveat this post-coital hobby high as I don't want to oversell things to you,  dear reader. Is Crusade perfect? No. Is 40K perfect? No. Am I the perfect opponent? No, but thanks for asking. The thing is, I'm slowly learning to relax about, and laugh at, 40K's post-reality mechanics.
Today's post is really just chronicling my first serious weekend of 40K Crusade, including one of the multiplayer Treachery and Honour missions from the Catastrophe mission pack.

Having been tipped about the existence of a xenos cult on Andaras Prime by Drew's Farseer, I threw my challenge gauntlet at Jeff: my Cobalt Scions versus his Starborn Souls in a 500 point exchange of strongly worded opinions.
As with many 500 point games it was very much a game of rock, paper, scissors. My aggressors were a hard counter to his lightly armoured cultists, but his Achilles ridgerunner (pictured above) was a haaaard counter to my aggressors. So I hid them. That's the way of these xenos cults; they make you worry about the big industrial laser, and then ambush you with a Kellermorph and cap two of poor Squad Lastratus from what you thought was a place of relative safety.

Sergeant Lastratus went on a bit of an enraged bender after that, running after the gang of cultists accompanying the Kellermorph and, in the close confines of the warehouse, punching them all to death over several turns in what will be recorded as an ENTIRELY PROPORTIONATE police action.
In the end, despite some clever plays by Jeff (who it should be remembered has barely had a chance to play 9th ed, and is very much playing catch-up with us) the Starborn Souls were denied the chance to set up GSC Openreach software on all the local network points, thus denying local Imperial Citizens all sorts of helpful advice malware on their cogitators.
Also, I smacked his Magus in the leg with a thunder hammer, but Tom suggested it was her fault for wearing high heels in combat. Classic victim blaming.

This might be my first full weekend of crusading, but Tom and I had been getting a few games in here and there beforehand and had thus already established BEEF between Lieutenant Antigonus Nerva and Kurnul Guluk da Git. And by "beef" I mean that Guluk had thrice given Nerva the sort of pounding normally reserved for an extremely rare cut of cow. It was time for payback. We played an assassination mission, and I doubled down with the Kingslayer agenda.
Sergeant Cassander then learned why it's a bad idea to charge kommandos in cover.
Full sportsman points to Tom; had he run and hid with Guluk he could definitely have got away after my initial assault stalled thanks to a combination of kommandos using the Surprise! stratagem and Nerva failing his (extremely doable) charge rolls. Guluk, however, is an ork's ork, and came out to offer Nerva's fourth beefing.
But this time, the sirloin was on the other plate. Sergeant Lastratus softened the Kurnul up with a power slap, and Nerva downed him with a golf clap-inducing thrust. Before he could deliver the crucial double-tap, however, he found he'd rather... run out of army. With the orks closing in on all sides I attempted to retreat, but eventually only Sergeant Castus from the hellblaster squad remained in play by the game's end. Pyrrhic, but successful. Peak 40K, and probably my favourite game of the weekend.

Tom was keen to try one of the all versus all games in the Catastrophe crusade mission pack, so we set up a full 6x4, packed our 750pt lists, and went for it.
Drew and I immediately ruined everything by opening diplomatic overtures (in our defence, this is clearly expected behaviour given how the multiplayer rules are written, but still). Jeff, concerned that his Genestealer Cultists were now facing a united front on one side and highly belligerent orks on the other, attempted 40K's answer to the Schlieffen Plan: knock out his ork rivals quickly and violently, then see what he could do about the allies on the far side of the map.
Naturally, the orks thought this looked like a good scrap, and went after Jeff's lads with MAXIMUM VENGEANCE, ignoring the allies almost entirely. Drew and I stood back and watched the carnage with some amusement, then when they had largely wiped each other out (after about a turn and a half) we moved in to clean house. I was more concerned with fulfilling my Agenda - the recovery of some precious geneseed stolen by Jeff's cultists - and offered Drew a shot at the main objective. Tom and Jeff did their best to sew the seeds of doubt in Drew. I had the last turn; if I wanted to steal the game from her I could. It would be child's play. And we all know how the Imperium feels about filthy xenos...
...But I had no such intentions. If I betrayed Drew now, it would prevent future diplomacy when it was expedient to my strategic needs (here's a translation for any Black Templars reading this: I am a xenos-loving coward). I'd just have to explain my failure to be sufficiently racist to the authorities later, citing such arguments as the resurrection of the Imperial Regent, and bugger off, Inquisitor, which I'm told is always a highly successful line of argument.

Sunday morning rolled around amidst much oversleeping following the 1.30am finish of the fustercluck. It was my turn to face Drew's Eldar, but having reached an informal understanding with their Farseer Taliesin, it would've been weird for the Cobalt Scions to immediately shoot them in the face. We decided therefore to pull a crusade army out of my ass, and use my old speed freak army, drawn to the fires of war by, well, gestures at the absolute situation on Andaras Prime.
We ran the supply drop mission, and I distracted Drew's army with obnoxious hit and run attacks from a few units of bikes, while Grimtoof - now old enough to appreciate the appeal of a second hand tool shop - drove up in a trukk and spent the whole game loading supplies into his ride (read: camping on an objective). My bikes had a lovely time, albeit a fairly pyrrhic one, and Grimtoof drove off with loadsa swag. Happy days. Well, for me at least. Drew was strongly not impressed by an army that rivalled her customary speed. I, for one, was reminded how emotionally relaxing it is to play as the one race in the galaxy having a good time.

With Tom and I having done marines vs. orks a lot recently, we decided to try some green on green for our Sunday afternoon bout. Another iteration of the supply drop scenario to represent the orks competing with each other to empty high orktane fuel from an Imperial silo.
I couldn't splat his mek's plane, he couldn't get to grips with my bikes, I couldn't dig his kommandos out of cover.... in the end, though, I got lucky about which fuel pump ran out last, and dunked on Guluk da Git (still smarting from his sword wound at the hands of Lieutenant Nerva) by lining up deffkoptas and shouting ARRR PEEE JEEEEE. Hur hurr.

Other games played by other people

I've got no idea what went down in most of these, but I do know that Jeff learned a lot over the course of the weekend, and all of us got way more used to all the campaign admin. At this point I can comfortably say Crusade is my favourite way to play; that continuity is extremely charming. Here's some photos from other people's games in no particular order:

That's all for today. Bring on the next round, says I. It's really satisfying to be playing this kind of game with an army I've poured so much narrative thought into. As ever I wish I had a giant house that could fit all my friends at once, but 4 was company, and I couldn't fit a crowd. Oh no, I guess I'll just have to arrange more gaming weekends with more friends.