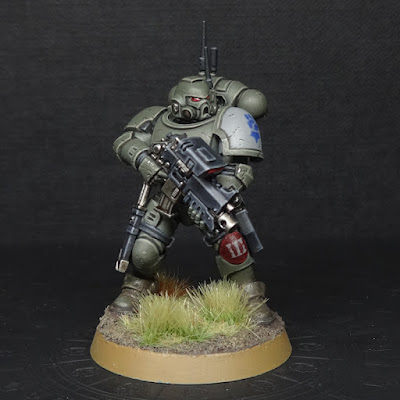 Phobos armour: sleeker. Sneakier. JUST AS BRIGHTLY COLOURED. The first time GW put out a unit wearing Phobos armour left me decidedly confused. The Phobos-clad Reiver squad was depicted wearing bright blue heraldry so they didn't seem like stealth troops, but were instead... terror troops? I'm sorry, aren't marines terrifying by default?
It didn't help that the greaves made me think of cargo shorts and skater shoes. Those Reivers would love to help purge the galaxy of xenos, but sorry, they're too busy doing radical tricks in the nearest halfpipe.
It was only when the rest of the Phobos stuff dropped that my attitude started to soften. Ohhhhh, they're stealth troops, they've just been painted in bright colours because Flames Orkshop.
I started to imagine how these tacticool idiots would look if painted in more drab colours, and I liked what I was imagining. So much so, in fact, that I recently bought a box, built 5 Incursors (albeit without the Geordi LaCyclops visors) and painted up a test model. 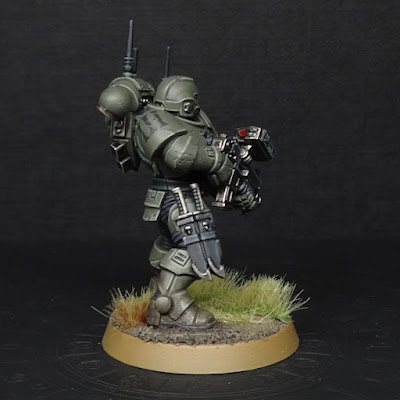 Bit sneakier, huh? I'm not claiming I'm being original here; I've seen other people do it as well. I just had fun adapting the insignia established on the rest of my army and muting it somewhat. Arguably the big blue fist is still a reach, as is having any metal surfaces, but gimme a break. I'm trying to strike a balance between "sensible" and "looks good on the table." 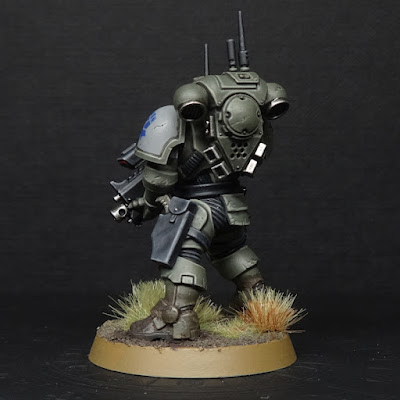 The chapter badge background has been shifted from white to mid-grey, the bright company kneepad knocked back to a darker tone, and the squad markings on the right pauldron just became black numerals. I also avoided having any glowing lights anywhere; the eye lenses and big honkin' gun sights are both red glass instead.
The red knee pad means he's from the 3rd company, just like the rest of my Cobalt Scions army so far, and the number 3 is his squad number. Primaris marines can switch armour between deployments, although I imagine the 10th Company Vanguard are the Chapter's stealth specialists and really don't leave home in anything other than Phobos plate. 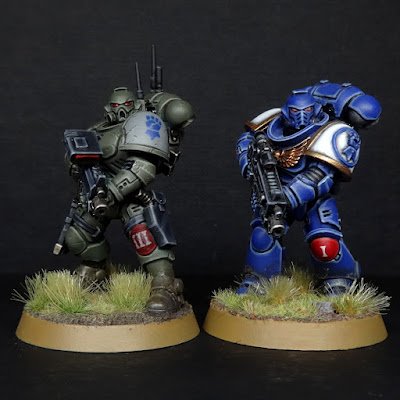 If you're curious, here's the step-by-step:
I think I went overboard on the chipping, but otherwise I'm pretty happy with how this looks. Now to paint the other 4 so he can get on a table and be... marginally less effective than my other troops units, but way more tacticool. And radical.