The end of the grass is nigh


The Beard Bunker’s oldest Realm of Battle board has been showing its age for some time. We bought it when they were first released, and I have several fond memories associated with it, my favourite of which was coming home from work to find Maisey sitting on the sofa, a pair of clippers in one hand, and a 2’x2’ tile in the other, surrounded (and I mean surrounded) by mashed-up skull flakes.

Skull flakes are not a breakfast cereal (for anyone except the inhabitants of the Imperium), but the byproduct of what happens when you remove the one thing about the RoB boards Maisey and I find a little, er, silly – that is, the ball pools made of skulls. Why the chap who sculpted said boards thought this was a good idea, I’ve no idea. Various theories as to their purpose abounded, although my favourite was that of a fellow hobbyist, who posited that the Old World was in fact a giant bean bag full of skulls.

Anyway, Maisey and I (mostly Maisey) hacked and drilled those guys out to make rock pools, painted them up, and covered the rest with grass. We even took the time to fade different colours of static grass into each other to break up the texture. It looked delicious. We left it in our then-gaming room, a conservatory (known to visitors as the Nerdservatory). The sun proceeded to drain the colour from the grass. Add a leaky ceiling and a few ill-advised mug deployments, and you have a shabby-ass piece of lame.

The time has come to strip that bad boy back down and start again.

What I can talk about is that which we did over the weekend: stripping the grass off a board so that it could be re-painted.

The main thing is that PVA – the glue used to stick the grass on – is soluble. So, here’s what we did:

1. Improvise a tub/bath/paddling pool. We used a plastic dust sheet (available from DIY stores for very little money) and then propped it up at the sides with a cold frame (you could use anything – bricks, a wall, your mum... whatever, really). 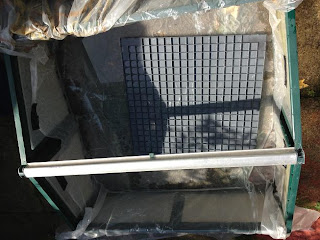 2. Fill it with water, and stick a RoB tile into it face down. Why face down? Because RoB tiles are buoyant. 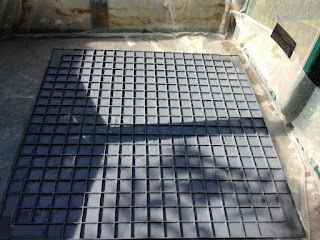 3.  Leave it alone for ages. Like, 3-4 hours. You could probably leave it for less time, but whatever.

4. Get a cheap and nasty floor brush and scrub. Scrub like a person possessed.

5. Swear profusely when you discover there are a few random patches that don’t come off no matter how hard you scrub. Experiment with various hard-edged tools and old toothbrushes before discovering that fingernails iz best.

6. Rinse any loose grass off, and leave to dry.

In previous posts I’ve said things like “we’ll have the thing finished in a week” only to produce said finished product about six months after we suggested. “Or not at all,” Maisey says, peering at the screen over my shoulder and thinking of part two of “Tanky Tank Tank.” But seriously, if I don’t have a good Fantasy table by the end of the weekend, I will be sad.

In fact, here’s one promise I’ll keep: if I don’t have a finished RoB board to show you next Monday, I’ll post a picture of myself looking sad. Very sad. There may be tears. And violins. And tears.